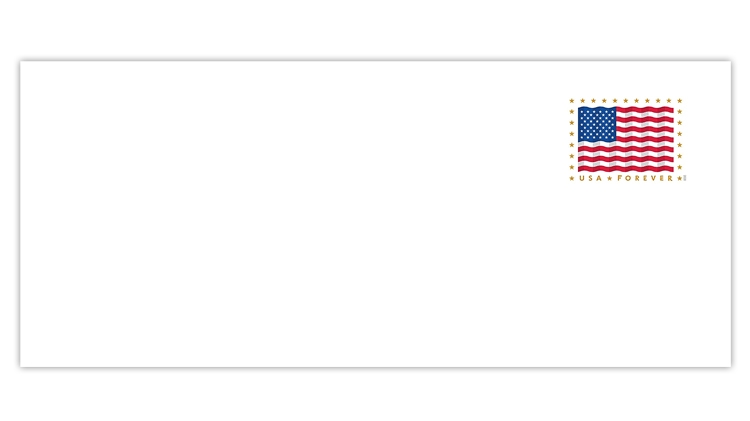 A new stamped envelope will be issued June 15, with 10 varieties for the consumer. The nondenominated (55¢) imprinted forever stamp shows a flag design by artist Kit Hinrichs. 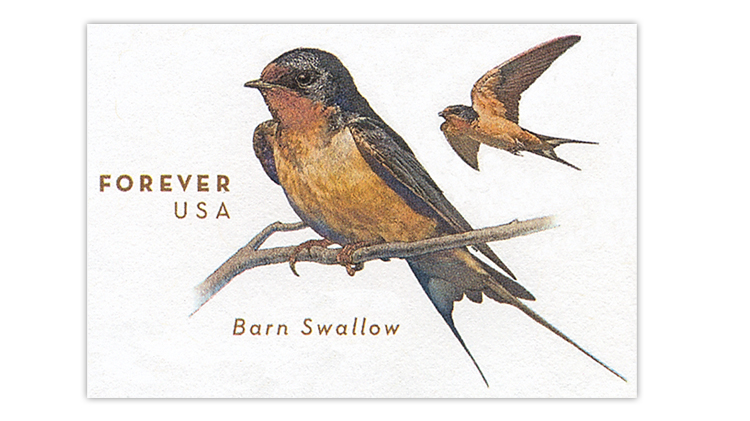 The new Flag envelope is the first U.S. stamped envelope issued at the first-class letter rate since the 2017 Barn Swallows issue. 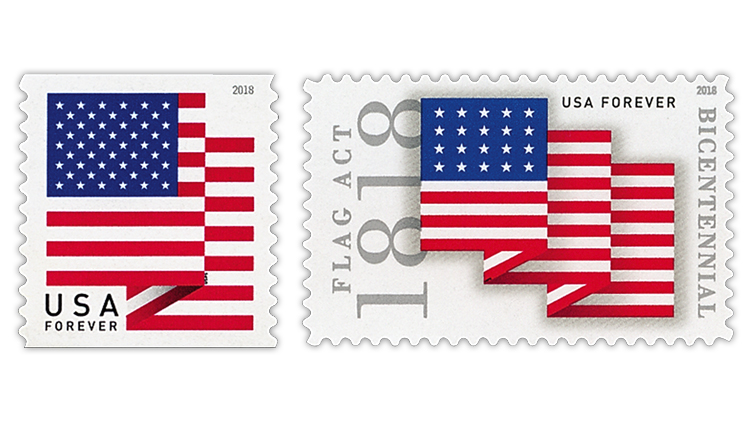 Two U.S. postage stamps with flag illustrations by Kit Hinrichs were issued in 2018. The definitive stamp at left was issued in four varieties; the commemorative stamp at right was issued for the bicentennial of the 1818 Flag Act.
Previous
Next

For the first time in more than three years, the United States Postal Service is issuing a new stamped envelope for first-class letter mail.

The U.S. Flag stamped envelope will be issued June 15. The imprinted stamp features a graphic illustration of the 50-star American flag with six vertical folds to evoke a sense of the flag extended and fluttering in a strong wind.

The flag design is surrounded by 26 stars, including one between the USA and FOREVER inscriptions below the bottom of the flag.

The artwork by Kit Hinrichs evokes “a rich sense of history even as it presents a recognizable icon in a fresh, contemporary way,” according to the Postal Service.

Ethel Kessler served as art director for the envelope project.

The Flag stamped envelope was revealed near the end of 2018 as an intended issue for 2019. However, the Flag envelope never appeared during the year and was announced again on April 3.

The previous envelopes at the first-class rate were the forever envelopes showing barn swallows on the imprinted stamp design issued March 3, 2017 (Scott U696).

The last U.S. stamped envelope issue to include a U.S. flag in the design was the Eagle, Shield and Flags envelope issued Aug. 9, 2013 (Scott U682).

Hinrichs has been described previously by the Postal Service as the founder and director of an educational foundation devoted to the American flag, with a collection of more than 5,000 items.

Four months later, on June 9, 2018, a commemorative stamp celebrating the 200th anniversary of the 1818 Flag Act was issued. The design shows an extended version of the 20-star flag with four folds.

No first-day ceremony is planned for the new stamped envelope’s release date. Liberty, Mo., a city of about 30,000 located 15 miles northeast of Kansas City, has been chosen as the first-day city and will be featured on official first-day postmarks.

Collectors and postal customers will be able to choose from 10 envelope varieties, although the imprinted stamp appears to be the same on each variety.

Envelopes with self-adhesive flaps will be sold at post offices and available as No. 10, No. 9 and No. 6¾ sizes, either with or without an address window in each size.

Through its Stamp Fulfillment Services mail-order division, the following varieties will be available with flaps that use a moisture-activated adhesive: No. 10 regular and window envelopes, and No. 9 and No. 6¾ regular envelopes.

Ordering information is available on the USPS website, and phone orders can be placed at 800-782-6724.