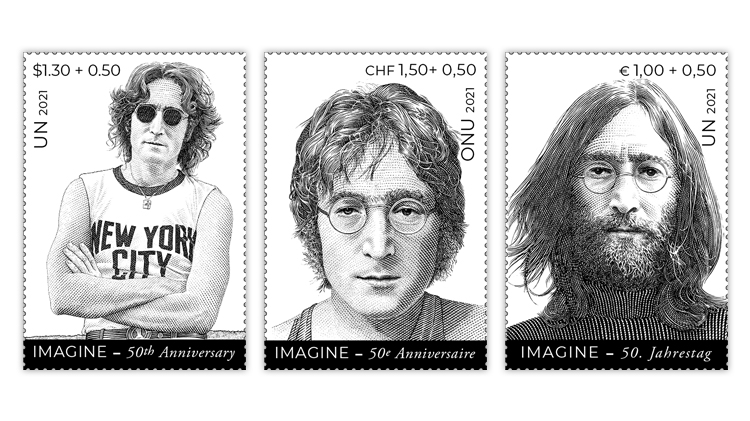 Three new United Nations stamps honoring musician John Lennon and the 50th anniversary of his song Imagine have an announced issue date of Sept. 21, which is also the International Day of Peace.

A new set of stamps and souvenir sheets from the United Nations Postal Administration is joining worldwide anniversary commemorations of John Lennon’s Imagine.

The celebrated song, which envisions a peaceful world devoid of hunger and greed, was first recorded and released by Lennon 50 years ago in 1971.

On Sept. 21 the United Nations is issuing three semipostal stamps, one each denominated for use from the U.N. post offices in New York City; Geneva, Switzerland; and Vienna, Austria; as well as three single-stamp Imagine souvenir sheets with stamp designs and denominations that differ from those of the individual stamps.

The issue date corresponds with the annual observation of the International Day of Peace.

The individual stamps are each printed in panes of 20 and feature a different engraving-style portrait of Lennon by Swedish-born artist Martin Morck, who has gained worldwide prominence as an engraver of postage stamp designs.

Each portrait is modeled after a well-known photograph of Lennon, who rose to fame as a founding member and songwriter of the Beatles, and continued his musical career with solo work and collaborations after the group broke up in 1969.

Born in Liverpool, England, in 1940, Lennon was shot and killed outside his Manhattan home in 1980.

The single stamps are printed and denominated in black, and a black tablet along the bottom reads “IMAGINE – 50th Anniversary” in dropout white. On the Geneva stamp the phrase is in French, and on the Vienna stamp it is rendered in German.

The single semipostal stamps in the souvenir sheets each show one of the three photographs of Lennon upon which Morck’s portraits are based.

At far left on each souvenir sheet, printed in white on a gold field, is a small self-portrait sketch of Lennon, the words “IMAGINE” and “John Lennon,” and a facsimile of Lennon’s signature.

The complete lyrics to Imagine are printed in black in the center. The words are in English on the New York sheet, translated into French on the Geneva sheet, and in German on the Vienna sheet.

The name of the stamp image photographer is printed directly below the stamp at right, and at bottom right is the message “Surcharge will help fund the United Nations Peacekeeping Operations,” again translated into the respective language for the Geneva and Vienna sheets.

Copyright information for the Imagine lyrics and the photographs also is printed on the souvenir sheets.

The denominations on the souvenir sheet stamps are printed in gold, unlike the single stamp issues.

Rorie Katz of the UNPA designed the stamp issue.

The $1.30+50¢ stamp and $2.60+$1 souvenir sheet stamp for the post office at U.N. Headquarters in New York show a famous image of Lennon in dark glasses with his arms crossed in front of him, wearing a sleeveless T-shirt emblazoned with “NEW YORK CITY.” The photograph was taken in August 1974 by Bob Gruen (born 1945).

The denominations on the U.N. New York issues correspond to the international rates for 1-ounce letters ($1.30) and large envelopes weighing 1 ounce or less ($2.60).

Scottish photographer Iain Macmillan (1938-2006), famous for taking the photograph of the Beatles crossing the street single file for the cover of the 1969 album Abbey Road, also took the 1971 photograph of Lennon used for the stamps denominated in Swiss francs for use from the Palais des Nations in Geneva.

The denominations are 1.50 francs+0.50fr for the single stamp, which pays priority letter rate for international mail, and 2.60fr+1fr for the souvenir sheet stamp, which fulfills the same rate for heavier mail weighing up to 50 grams (about 1.76 ounces).

The picture is a full-face image of Lennon wearing his familiar eyeglasses with metal frames and small round lenses.

The same photo was previously used as the basis for artwork by Andy Warhol that appears on the cover of the 1986 Lennon compilation album Menlove Ave.

David Nutter (born 1939) was the photographer for the 1969 wedding of Lennon and Yoko Ono in Gibraltar. His photograph of Lennon with longer hair and beard, wearing a dark turtleneck sweater, appears on the €2.85+€1 souvenir sheet stamp for use from the U.N. post office at the Vienna International Centre, and is rendered as a portrait by Morck on the €1+€0.50 single stamp. The 1969 photograph used for this set was taken in London about one month after the wedding.

The denominations for the Vienna issues meet priority rate for small letters mailed throughout Europe (€1) and registered mail service on international mail (€2.85).

“The year 2021 marks the 50th Anniversary of the recording of Imagine by the English rock musician,” the UNPA said in announcing the new issue. “Released in 1971, the song, which is the most successful single of Lennon’s solo career has been covered by artists in every genre around the globe. It has been performed at some of the world’s biggest events, including concerts for Peace, Hunger, New Year’s celebrations and at several Olympic Games – including the recent opening ceremony of the 2020 Olympic Games in Tokyo, Japan. The song Imagine has also been played as a hopeful message during troubling times throughout history.

“The song lyrics encourage us to put aside all differences and unify to imagine a world of peace, without greed, without hunger, without barriers separating people and nations. John Lennon’s message of peace, love and goodwill conveyed through his music, still resonates today.”

The UNPA advises that it is anticipating a late shipment from the printer and that orders for John Lennon/Imagine stamps will be delayed.