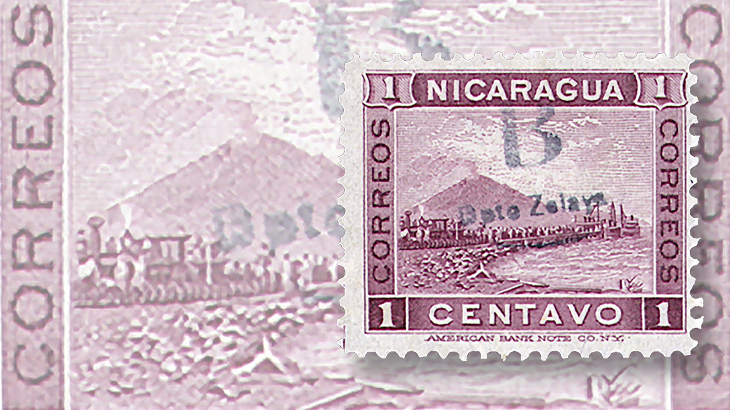 Nicaragua’s definitive (regular-issue) stamps of 1900 were overprinted in 1904 for use on mail originating in the prosperous coastal area of Bluefields.

Following the listings for Nicaragua’s postal tax stamps in the Scott Classic Specialized Catalogue of Stamps and Covers 1840-1940 is the modest array of postal issues of the Province of Zelaya (Bluefields) on the eastern coast of Nicaragua.

Bluefields is in the area originally known as the Mosquito Coast Reservation, and its chief Caribbean port. The Mosquito name refers not to the flying insect but rather is a corruption of the name of the indigenous Miskito Indians.

This port harbored Dutch, English and other European pirates in the 16th and 17th centuries, and is named after one of them: Dutch privateer Abraham Blauvelt, who explored Central America in the early 1600s for the Dutch West India Company.

The king of the Miskito people signed a treaty with the British in 1740 that surrendered local sovereignty and essentially made the area a protectorate of England.

By the 1880s, Bluefields was a rich and busy place — the wealthiest in Nicaragua — with extensive commercial interests in mining, wood and fruit, especially bananas. The lure of this lucrative region was irresistible to the national government, and what had been part of the Miskito Reserve around Bluefields was absorbed into Nicaragua proper.

The first stamps of the republic of Nicaragua were issued in 1862 and used throughout the country. However, a peculiar economic situation in the earliest part of the 20th century in Zelaya led to the province’s special local stamp issues (Scott 1L1-1L10) in 1904-05.

Rich and remote Zelaya used a silver peso whose value was double that of the paper peso used in the rest of Nicaragua. This disparity made it worth the while of the unscrupulous to purchase stamps in the paper-peso areas of Nicaragua at essentially half price, and then use them in Zelaya.

Apparently, this trickery resulted in the loss of enough postal revenue to draw the attention of the government, and an official decree was issued on May 15, 1904, to put a stop to the cheap imports. The new edict stated that all postage, telegraph and fiscal stamps in stock in the province of Zelaya were to be overprinted with a special marking, and these would be the only stamps accepted for use on mail originating in the province.

The markings on the Zelaya stamps consist of a large capital letter “B” with “Dpto Zelaya” in smaller lettering below, and a curved bow-shaped dash in the third line. The Zelaya markings are in black; the Cabo markings (a simple “Cabo”) are known in violet, magenta and black.

The regular stamps in stock in the Zelaya post offices at the time of the 1904 decree were the engraved Nicaragua issues of 1900 (Scott 121-133) with a design depicting the volcanic Mount Momotombo. (This stamp design gained a measure of general and philatelic notoriety for its supposed role in the 1902 decision by the United States Congress to route the proposed isthmian canal through Panama rather than Nicaragua.)

The overprints were applied one at a time, by hand, with a rubber stamp, and so variations in inking, clarity and general execution are to be expected.

What may not have been expected was the widespread appearance of illegitimate Zelaya and Cabo overprints in the philatelic marketplace.

The Scott Classic Specialized catalog warns, “Dangerous counterfeits exist of most of the Bluefields overprints,” and gives the same warning for the Cabo Gracias a Dios markings.

Because of shortages early in the 1900s, Nicaragua had been adapting various issues to serve as provisional postage stamps: surcharging postage stamps with new denominations, overprinting postage-due stamps to serve as regular postage, and so on. These Nicaraguan provisionals were popular with collectors, some of the attractions being their limited supply and short period of use.

Writing in the New York Philatelic Society Bulletin of December 1924, John L. Stroub wrote that collector demand prompted some dealers to order quantities of stamps directly from Nicaraguan postal authorities, with payment enclosed. When the paid orders came in, the provisionals sometimes were already sold out, or in quantities sufficient only for actual postal purposes, and the authorities were unwilling to spare the stamps for the dealers.

However, they also were reluctant to return the money, “and the orders were filled with ‘imitation’ provisionals,” Stroub wrote. “These were made on the correct permanent stamps, and sometimes in the same style as the legitimate issues. These ‘imitation provisionals’ were officially printed, but were not decreed for general use, although some of them were ‘cancelled by favor’ and ‘cancelled to order.’ A few actually passed through the mails.”

Stroub calls these items “speculative provisionals.” The existence of what could be called official fakes as well as counterfeits by private individuals certainly makes Zelaya and Cabo Gracias a Dios postal issues a collecting minefield.

The 2016 Scott Classic Specialized catalog lists a mint set of the first 10 Zelaya provisionals (Scott 1L1-1L10) at $120.90. Indicative of the difficulty of finding the higher denominations of the overprinted stamps in used condition, catalog values are listed only for 1L1-1L7, at $24.80.

The problem of buyers taking advantage of the paper peso vs. silver peso margin was resolved in 1912 when all of Nicaragua adopted the gold standard.