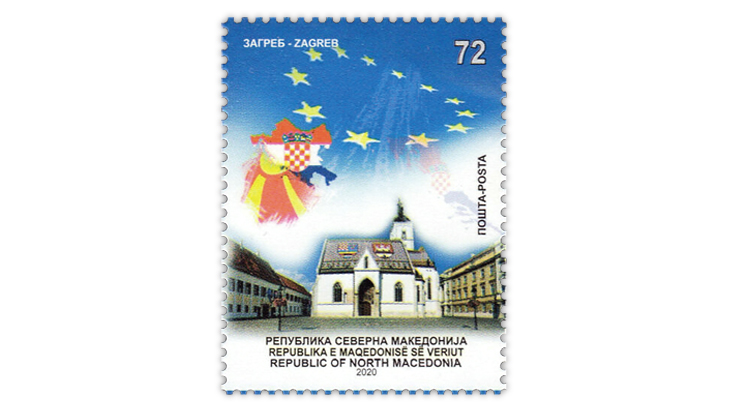 North Macedonia withdrew this stamp from sale May 9, a day after it was issued. Serbia and Bosnia and Herzegovina had made official complaints about the World War II-era map of Croatia shown on the stamp.

The post office also apologized for the mistake in a press release dated May 9 and posted on its website.

According to this press release, the 72-denar stamp was issued May 8 to commemorate Croatia’s presidency of the Council of the European Union. The controversial part of the design is the map shown in red, white and blue behind Croatia’s coat of arms.

The May 10 report on the English-language site of Macedonia’s Republika newspaper described the map as showing Croatia “with the borders of the NDH — the state created during the war with the help of the German occupying forces. The stamp has Croatia spreading over the whole of Bosnia, chunks of Serbia and Montenegro, and even Sandzak which was not part of NDH.”

Ivica Dacic, Serbia’s minister of foreign affairs, also demanded the stamp be withdrawn from circulation, according to news reports.

Euractiv, a media network that specializes in European Union policies, quoted the note from Dacic: “The Ministry of Foreign Affairs sees the decision to publish such a stamp, precisely on Victory Day, as a hostile provocative act aimed against the territorial integrity and sovereignty of Serbia and as an insult to the Serbian people, as hundreds of thousands of Serbs were killed in concentration camps in that same Independent State of Croatia.”

The Post of North Macedonia responded quickly by withdrawing the stamp.

The press release said, “The postage stamp shows a wrong map of the Republic of Croatia and other countries in the region, and therefore the brand is immediately withdrawn from use, which means annulment of the total issued circulation of 6000 (six thousand) copies.”

Also, according to the press release, the head of the bureau of philately was dismissed as was the Council for Postage Stamps, which selects the designs and artists for postage stamps.

In its apology, the post office expressed regret for the unintentional mistake, adding that the purpose of the stamp “was to express our gratitude to the Croatian EU Presidency for the assistance and support that the Republic of Croatia gives to our country.”

As is often the case, it is probable that some of the stamps were sold before the issue was withdrawn, and examples may their way into the marketplace.