Notable and beautiful: The 1933 airmail semipostal stamps of Latvia 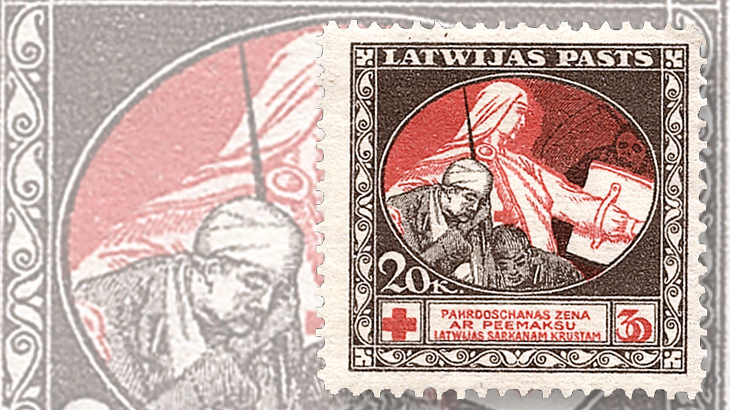 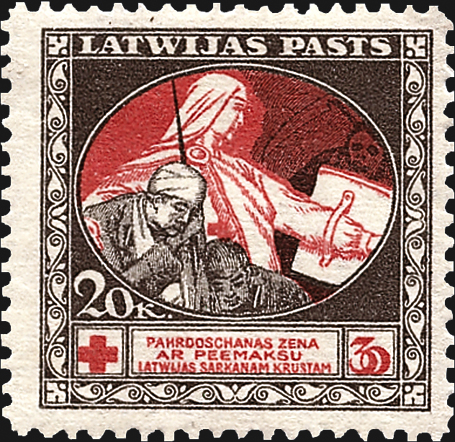 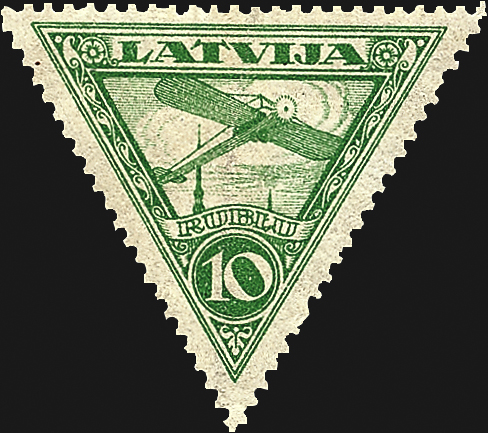 The black frames on these four 1933 airmail semipostal stamps from Latvia (Scott CB14-CB17) indicate that they were issued to honor wounded aviators. 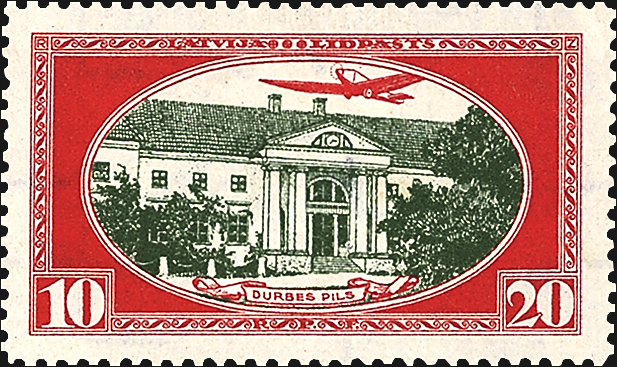 A perforated example of the first airmail semipostal stamp from Latvia, issued in 1930, Scott CB1.
Previous
Next

Everything about a set of four airmail semipostal stamps issued by Latvia in 1933 is notable.

First, they were a new type of back-of-the-book stamp that still is seldom seen — one that combined the still new (in 1933) rage for aviation with charitable intentions to create the category known as airmail semipostal stamps.

Second, the cause promoted by the stamps was a fund to build “tombs for aviators” — not the usual semipostal cause of curing tuberculosis or caring for war orphans and invalid soldiers.

Third, the designs of the stamps are extraordinary and beautiful.

Semipostal stamps had been around for a while, the first such stamps having been issued by New South Wales in 1897 (Scott B1-B2).

The surtax went to the Latvian War Invalids Society that was created to aid veterans of World War I.

Airmail stamps were of more recent vintage. The first stamp to be cataloged as an airmail stamp was issued by Italy in 1917 (Scott C1). However, this stamp was an overprint of a special delivery stamp.

The first specifically designed airmail stamp was issued by the United States in 1918 (Scott C3).

The first airmail stamps of Latvia were two triangular stamps issued in 1921 (Scott C1-C2). A Bleriot XI monoplane is shown on both.

Latvia was the first country to combine the two types of stamps by issuing the first airmail semipostal stamps in 1930 (Scott CB1-CB2). The stamps also were issued imperforate (CB1a-CB2a).

Both stamps were issued in memory of Rainis (pseudonym of Janis Plieksans), a Latvian poet, playwright, translator and politician, and considered to be the greatest Latvian writer.

The stamps portray Durbes Castle, the birthplace of Rainis. The surtax went to the Rainis Memorial Fund.

Between May 1930 and September 1933, Latvia issued a total of 24 airmail semipostal stamps; two-thirds of these were issued to raise funds for wounded Latvian aviators.

The stamps are lithographed on watermarked paper and perforated gauge 11½ (imperforate versions of all four stamps exist).

The stamps have a black frame, signifying that the stamps were intended as a remembrance of wounded aviators.

Each stamp in the set has a surcharge of 50 santimi, which accounted for 71 percent to 96 percent of the total price of each stamp.

The stamps were issued in extremely small quantities, and only a small portion of the stamps printed were sold to the general public by the main post office in Riga.

In some cases they were sold at other major town offices. The rest were purchased in bulk by dealers.

Because of how they were sold and their very high surtax, the stamps were hardly ever used on ordinary mail.

For many years the stamps were not listed by several international catalogs because they were not recognized as having been issued for postal purposes.

All four stamps are inscribed with the letters “APCLPF,” which stands for the Disabled Aviators Relief Fund.

Organized by the Latvian Air Force Regiment in the mid-1920s, the fund provided medical assistance to wounded aviators, support for the families of perished aviators, and care for the graves of fallen aviators. In addition to the sale of postage stamps, money was raised by air shows and lotteries.

The black and ocher 2s stamp (Scott CB14) depicts a winged man falling into the sea, symbolizing the fallen aviator.

Presumably the figure is Icarus of Greek mythology, who attempted to escape, along with his father Daedalus, from imprisonment on the island of Crete.

Icarus became ecstatic with his ability to fly and, forgetting his father’s warning, flew too near the sun, which melted the wax holding the feathers in his wings. The feathers came loose and Icarus plunged to his death in the sea.

The 3s black and red-orange stamp (Scott CB15) features a proposed monument to aviators, which consists of the figure of a man atop a massive stone base before which lies what appears to be the wreckage of an aircraft,  showing the propeller and cowling, again symbolizing the fallen aviator.

The 10s black and dark yellow-green stamp (Scott CB16) shows a proposed design for a tomb for aviators, consisting of a massive stone column containing a propeller in bas relief.

Perched atop the stone base is an eagle, which was a symbol of the Latvia Air Force.

The central image of the air force flag is a silver eagle grasping the state flag of Latvia in its beak. The drooping wings of the eagle signify the fallen aviator.

The 20s black and cerise stamp (Scott CB17) depicts a second proposed design for a tomb for aviators, consisting of a large propeller atop a stone base situated against a wooded hillside.

Flying above this image is an eagle carrying in its beak a wreath, symbolic of Latvia memorializing the fallen.

Each of the four corners of the 20s stamp contains a swastika, a symbol that had been used in Latvia long before it became the emblem of the Nazi regime in Germany.

In Latvia, the swastika was called the Ugunskrusts (which translates as “fire cross”) and was used as the marking of the Latvia Air Force between 1918 and 1934, as well as on the insignia of some military units.

There is no record of how much money the Disabled Aviators Relief Fund received from the sale of the stamps.

However, the goal of raising 200,000 lati to fund the proposed monument to fallen aviators was not realized.

But, in a small way, their highly imaginative and beautiful designs make the set of 1933 airmail semipostal stamps themselves a lasting and notable memorial.