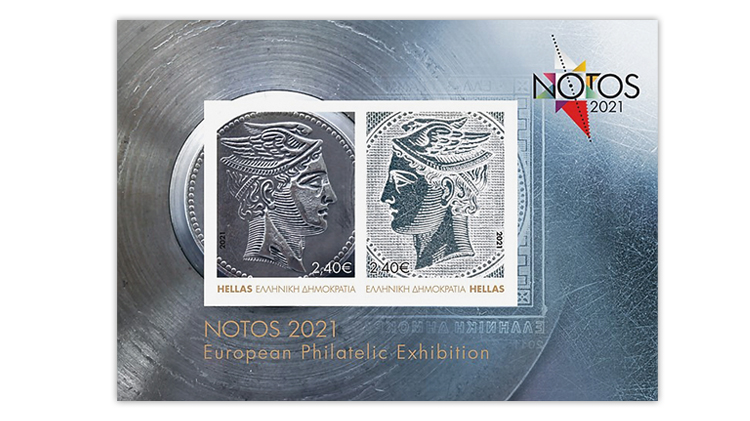 Greece will issue a two-stamp souvenir sheet Nov. 19 in honor of the Notos 2021 philatelic exhibition to be held Nov. 19-22 in Athens, Greece. Each €2.40 stamp pays tribute to the Large Hermes Head stamps of 1861, the first Greek postage stamps.

The Notos 2021 philatelic exhibition will be held Nov. 19-22 at the Zappeion, a conference and exhibition hall located in downtown Athens, Greece.

A highlight of the first day of the show will be the issuance of a Greek souvenir sheet of two €2.40 stamps in honor of the Notos 2021 exhibition.

The €2.40 stamp on the left of the sheet pictures the matrix of the medallion the served as the vignette for Greece’s first postage stamps, the 1861 Large Hermes Head stamps. French engraver Albert Desire Barre produced the Hermes medallion.

Yannis Gourzis’ design for the vignette of the Greek stamps issued in 2011 for the 150th anniversary of the Large Hermes Head stamps is featured on the €2.40 stamp on the right. Gourzis is a professor at the Athens School of Fine Arts.

“NOTOS 2021 European Philatelic Exhibition” is printed in the selvage below the stamps. The Notos 2021 logo appears in the top right corner of the selvage.

Notos 2021 attendees will have the opportunity to view important philatelic artifacts in the court of honor. Highlights include an exhibit about the genesis of the Hellenic Post, the original die and matrix of the Large Hermes Head medallion, the printing plates for the 1861 Large Hermes Head stamps, a plate reconstruction of the 20-lepta Large Hermes Head plate, and much more.

Four renowned exhibits that have received top awards will also be on display in the court of honor: Jean Voruz’s “Geneva from the Cantonal to the Federal Post 1839-1862,” which won the grand prix at Finlandia 2017; Stavros Andreadis’ “The ‘Kassandra’ collection. Greece — Large Hermes Heads,” the world stamp champion at Israel 2018; Wolfgang Bauer’s “Greece — Incoming and outgoing mail and their destinations 1827-1875,” in the championship class at Thailand 2018; and Chris King’s “The Posts in the city of Lubeck before 1868,” which received a large gold at China 2019.

Exhibits vying for awards at Notos 2021 will fill approximately 1,400 frames.

Numerous dealers will be at the show offering a wide array of stamps, postal history and philatelic supplies. The philatelic auction house A. Karamitsos will conduct an extensive sale on Saturday, Nov. 20.

Sunday, Nov. 21, will feature two book presentations by Heinrich Kohler Stamp Auctions and the Aikaterini Laskaridis Foundation. David Feldman SA, the Swiss auction firm, will give a presentation on the Museum of Philately.