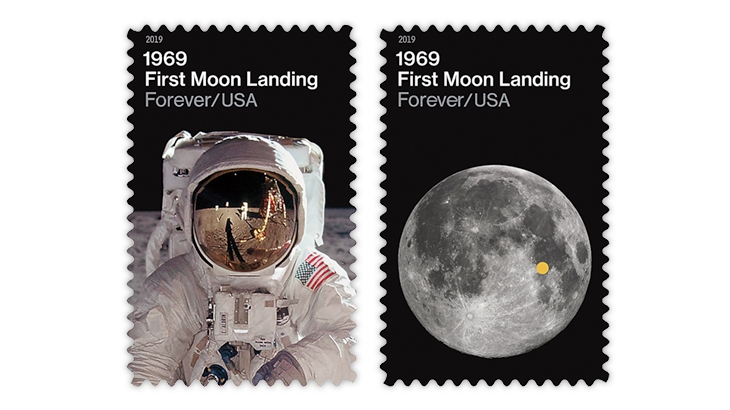 Free admission to the July 19 Moon Landing forever stamps first-day ceremony in Florida will be limited. The Postal Service will distribute free tickets on a first-come-first-served basis only with advance registration.

The Postal Service is offering a limited number of free ceremony tickets that will be distributed on a first-come-first-served basis.

To obtain a ticket, attendees must register in advance at www.usps.com/moonlanding.

The ceremony will be held at the Apollo/Saturn V Center, which can be reached only by a space center shuttle bus.

The two nondenominated (55¢) stamps commemorate the 50th anniversary of Apollo 11 and the first manned moon landing in 1969.

“One stamp features Armstrong’s iconic photograph of Aldrin in his spacesuit on the surface of the Moon,” according to the Postal Service. “The other stamp, a photograph of the moon taken in 2010 by Gregory H. Revera from his home in Madison, Ala., shows the landing site of the lunar module, Eagle, in the Sea of Tranquility. The site is indicated on the stamp by a dot.”

Issue dates for Moon Landing and three others revealed