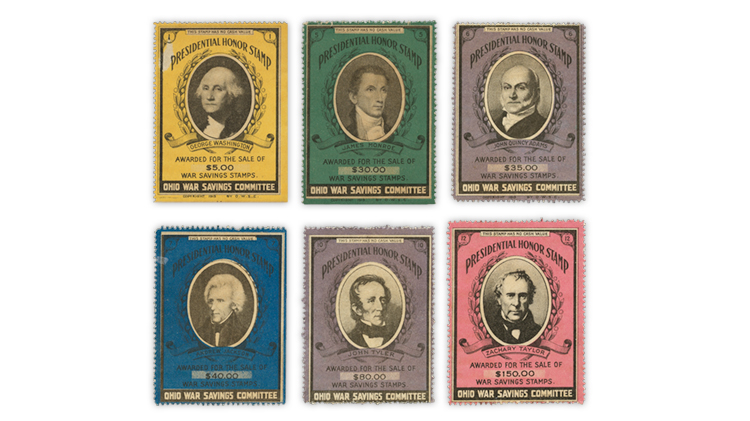 Shown are six poster stamps from a series of 27 given by the Ohio War Savings Committee after World War I to students who sold the noted amounts of war savings stamps.

Pictured here are six Ohio War Savings Committee stamps that a correspondent in Australia recently sent to me.

Each stamp shows a U.S. president with his name underneath the portrait and the text “Presidential Honor Stamp” above it. Text at the top of the stamps states that they have no cash value.

Here is what Charles said about these stamps: “Many certificates, plaques, ribbons, medals and other tangible items were given to successful sales agents ranging from school children and scouts to prominent businessmen. One of the most unusual awards was given by the Ohio War Savings Committee in 1919 to students.

“The award was a series of large poster stamps … featuring portraits of the Presidents of the United States. A stamp picturing George Washington was given to an Ohio student who sold $5 in Thrift or War Savings stamps. A John Adams stamp was given for $10 in stamps sales and so forth. In all there were 27 stamps (representing all the Presidents to date) given for sales ranging from $5 to $10,000. The then current President Woodrow Wilson was featured on the $10,000 stamp.”

Charles illustrates one of the Wilson stamps, which must be a truly scarce item.

Cover includes invitation to laying of cornerstone in 1856