Living in the past: old names inscribed on new postage stamps 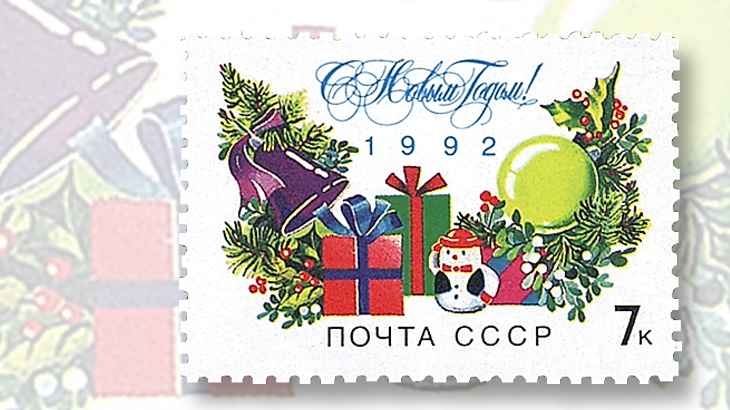 This 7-kopeck Soviet Union stamp was issued Dec. 8, 1991, for Christmas and New Year. The date “1992” is written on this “CCCP” (USSR) inscribed stamp to refer to the upcoming new year, however the Soviet Union would be gone by the end of 1991. 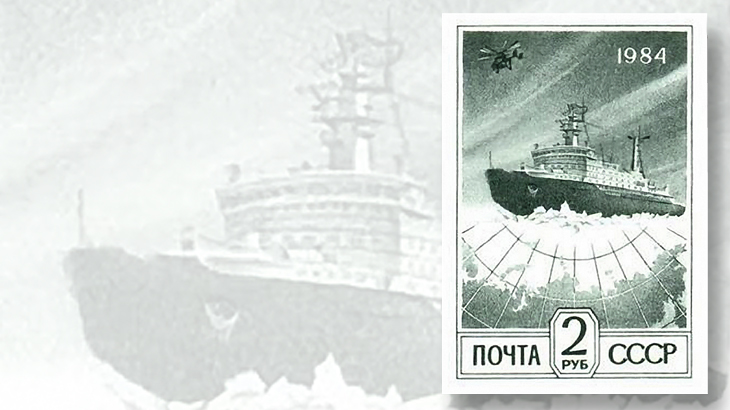 This imperforate 2-ruble Russian stamp inscribed “CCCP” (USSR) issued April 20, 1992, is the third printing of a 1984 Soviet definitive stamp and retains the ‘1984’ date inscription. The inscription on the stamp at its time of issue refers to a defunct na 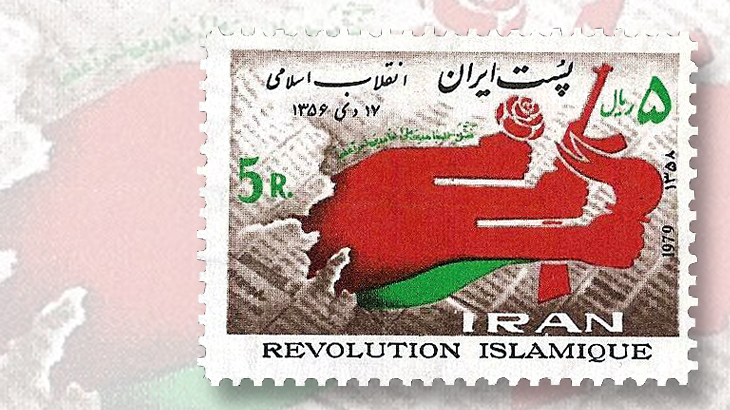 This 5-rial Iranian stamp was issued as part of a set of four stamps April 20, 1979, to commemorate the Islamic Revolution. The inscription on the stamp simply states “Iran” instead of the new official name for the country, the Islamic Republic of Iran, t
Previous
Next

Changes to the official or unofficial name of a country — generally as a result of a revolution, change in government or referendum — are usually reflected accurately on the inscriptions of the respective country’s stamp issues.

However, due to various circumstances, such as lack of time, the costs associated with printing new stamps or excess stock, some postage stamps have continued to bear the former name of their country for a period after a name change.

Such was the case with Russia Scott 6016Bc, a 2-ruble imperforate definitive stamp depicting an atomic icebreaker over a map of the Arctic and northern Russia.

This stamp was issued April 20, 1992, in sheets of 10, some months after the Soviet Union dissolved on Dec. 26, 1991. However, it bears the Cyrillic inscription “CCCP,” which translates as the USSR (Soviet Union), in English.

This created an interesting situation where the inscription on the stamp referred to a defunct nation by the time it was issued.

This stamp is the third printing of a single denomination from a 1984 definitive series of four stamps (Russia Scott 5286-5289). The “1984” date inscription was retained on the original stamp and the two subsequent printings of the 2r stamp.

The original printing of this stamp (Scott 5287) was issued Sept. 5, 1984. It is perforated and printed on chalky fluorescent paper in a lighter shade of gray-black.

Two mysteries remain: Why the third printing (Scott 6016Bc) was issued after the fall of the Soviet Union, and why no other stamps from this definitive set were reprinted at the time.

Following the dissolution of the Soviet Union, the Cyrillic inscriptions were changed from “CCCP” to “??????” (translated in English as Russia) on stamps of its post-Communism successor state, the Russian Federation.

The Latin inscription for the Russian Federation on postage stamps was initially “ROSSIJA.”

It would be several years before it was changed to the English inscription “RUSSIA” on Oct. 12, 2006.

On a related note, Russia finally received an updated entry in the United Nations New York Flag series with a stamp for the Russian Federation and its flag on May 2, 2013 (United Nations-New York Scott 1064).

This U.N. stamp was issued more than 21 years after the dissolution of the Soviet Union. The previous entry representing Russia in this U.N. series was a stamp for the Soviet Union and its flag issued Sept. 20, 1985 (456).

A different but related example of a discrepancy between the country name and date involving the Soviet Union and Russia can be found on the 7-kopeck New Year stamp issued Dec. 8, 1991 (Scott 6050), about two and a half weeks before the breakup of the Soviet Union.

The stamp is inscribed “CCCP” and bears a “1992” inscription in reference to the upcoming new year.

However, by the time 1992 actually arrived, the Soviet Union was gone and, as mentioned, the “CCCP’” inscription on Russian stamps had been replaced.

Other examples of stamps issued after a change in government but still bearing the former official name of a country exist as well.

One subtle example is Iran Scott 2000-2003, a set of four stamps issued April 20, 1979, commemorating the Islamic Revolution that occurred approximately two months prior to this date.

The Islamic Revolution replaced the monarchial form of government that had ruled the country for thousands of years and resulted in a national referendum establishing an Islamic republic on April 1, 1979, which changed the official name of the country from Iran to the Islamic Republic of Iran.

The set in question was issued some weeks after the name change; however, these stamps still bear the “IRAN” inscription on them.

It would not be until July 21, 1979, that the new official name of the country was reflected on its stamps in both Persian and English. This occurred on the final entry of the Regional Cooperation and Development series, a long-running joint issue series with Turkey and Pakistan (Iran Scott 2020-2022).

Iran issued a stamp between these two dates on June 5, 1979 (Scott 2019) to commemorate the establishment of the Islamic Republic as a result of the national referendum.

Ironically, this stamp also did not use the country’s official name in its inscription and again opted for the “IRAN” inscription, although the French inscription “Republique Islamique” was included separately on the lower part of the stamp.

It would not be until some years later that the English inscription “I.R. Iran” was consistently used on stamps of Iran.

These examples from two countries remain an interesting comparison of instances where stamp issues are slow to adapt to the changing conditions in a country that result in a change to the country’s name.

It could even be imagined that they represent an alternate history in which, for example, the Soviet Union continued to exist in 1992 or in which Iran officially retained its secular name after the revolution of 1979.

Here are some more articles about worldwide stamps: