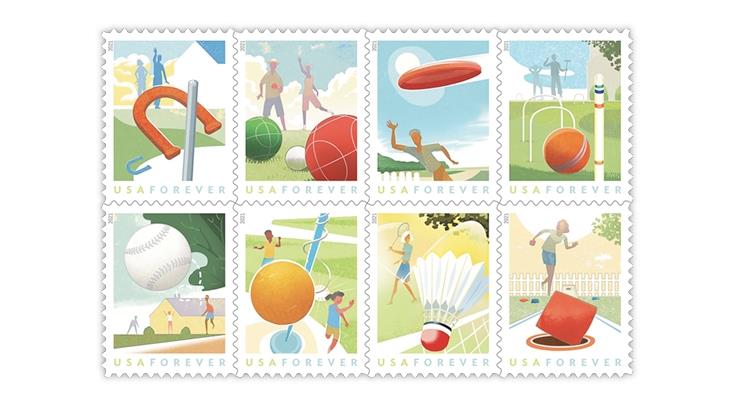 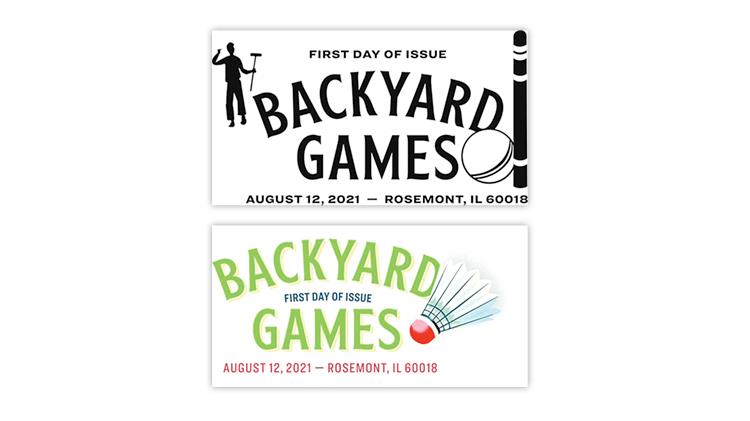 Pictorial first-day cancels for the Backyard Games stamps feature croquet on the black postmark, and badminton on the color postmark.
Previous
Next

Eight United States stamps celebrating outdoor fun with family and friends will be introduced Aug. 12 in the Chicago suburb of Rosemont, Ill.

The nondenominated (55¢) Backyard Games set of forever stamps will be issued in panes of 16 and sold nationwide on the date of issue. The cost of the forever stamp is slated to increase to 58¢ just 17 days later, on Aug. 29.

Most of these games are easily played regardless of experience, though skill and practice help players excel.

The central focus of each colorful design is equipment essential to the game. As an example, the Badminton stamp depicts a shuttlecock traveling over the game net. A smiling woman with her racket in motion can be seen in the background of the illustration.

The pane margins show a bit of hilly green landscape and clouds, with the words “BACKYARD GAMES” printed at the top.

The stamps are offset-printed in four colors by USPS contractor Banknote Corporation of America using the Gallus RCS press.

The stamp show is free to attend, and the first-day ceremony is open to the public.

While these are not the first U.S. stamps to illustrate recreational sports and games, most of the games portrayed on the new set have not appeared on U.S. stamps previously.

Baseball is a popular subject, of course, but the Postal Service describes the new stamp from the Backyard Games set as showing “a variation on pick-up baseball.”

“As temperatures warm up, Americans head outside to relax and enjoy the sunshine,” the Postal Service wrote in its description of the new stamps.

“With a touch of strategy, a bit of luck, and a healthy dose of friendly competition, backyard games provide almost endless amusement.”

The game of horseshoes is rarely played with real horseshoes these days. More commonly, larger horseshoe-shaped substitutes of metal or rubber are tossed at a stake from a distance of 40 feet.

A successful throw resulting in a ringer, where the horseshoe fully surrounds the stake, scores the most points.

Bocce is a game with European roots where a player or team seeks to bowl a ball as close as possible to a designated target ball, known as the jack. Strategies include using the thrown ball to strike an opponent’s previously thrown ball and move it away from the jack.

The flying disc is often described casually as a Frisbee, the trademarked name of the popular disc manufactured and marketed by the Wham-O toy company.

The disc can be used for casual toss games between two or more participants, or for a trained dog to catch and retrieve, or for competitions such as disc golf and ultimate.

Modern croquet developed in the 19th century but has its roots in older games played in the British Isles and France. Mallets and balls are used to complete a course through hoops or wickets arranged on a grassy playing field.

Pickup baseball brings players together in an informal setting. Divided into two teams, the basic rules of baseball are followed, but without officials and with greater leeway than more structured events.

For tetherball, a volleyball suspended from a rope on a tall pole is struck in opposite directions by two opponents seeking to wind the rope entirely around the pole.

A back-and-forth racquet sport similar to tennis with a suspended net dividing opponents, badminton uses a light racquet and a shuttlecock instead of a tennis ball, and often is played outside of any rigid rules (though advanced competitions have very specific regulations).

In the bag toss game known as cornhole, players throw fabric bags filled with beans or kernels toward an angled board with a scoring hole near the far end. A tossed bag that drops through the hole scores the most points.

Two pictorial first-day cancels for the Backyard Games stamps depict a croquet scene on the black postmark and a shuttlecock on the color postmark.