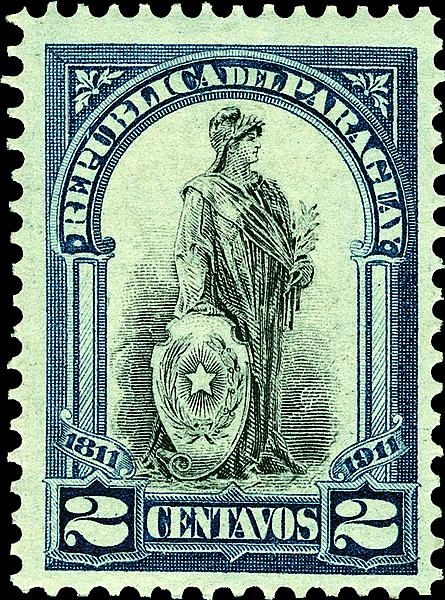 Paraguay issued a set of stamps with this allegorical figure in 1911 for the centenary of national independence.

Paraguay declared its independence from Spain in 1811, and 100 years later, the country marked the event philatelically with an attractive set of bicolored stamps featuring an allegorical image of Liberty or “The Republic.”

The standing female figure faces the right edge of the stamp with the shield of Paraguay at her feet. Denominations for the set of seven are 1 centavo, 2c, 5c, 10c, 20c, 50c and 75c (Scott 201-07). The 2c stamp is shown. The stamps were issued perforated, but according to the Scott Classic Specialized Catalogue of Stamps and Covers 1840-1940, the 1c, 2c, 10c and 50c values also exist imperforate.

The specialized Kneitschel Catalogo de los Sellos Postales de la Republica del Paraguay y Sus Derivados adds the 5c and 20c values to the imperforates list and also indicates that the cap or head are doubled on some 1c and 2c values.

The stamps were printed by the South American Bank Note Co. and issued in post office panes of 50 (five by 10) with the imprint of the company centered in all four margins. A handstamped control number appears in the upper-right margin of the sheet above the 10th stamp in the first row. Some panes have the plate numbers for the frame and vignette in the left margin.

Mint stamps are not difficult to come by; the proofs, a little more so. Even today, more than a century after the stamps were issued, there are still a few large dealer stocks of unbroken sheets.

Most stamps printed by the South American Bank Note Co. can be found in a broad array of proofs, trial color proofs and specimens. Proofs of the Paraguay Centenary of Independence 1c and 50c values exist, some on card, some on paper. They are somewhat more difficult to find than you might expect. Essays are known. Christie’s December 1991 auction included bromide (photographic) essays with handwritten notes signed by Juan P. Perez.

In 1911, the cost of a Paraguayan domestic letter was 20c. A letter to any Universal Postal Union destination, such as the United States or Germany, cost 75c, and a postcard was 50c. The registration fee also was 50c.

Used examples of the issue should not be difficult to find, but there do not seem to be a great many covers on offer, making postal history of this issue a significant challenge. Most common is mail to Argentina, the United States and Germany.

Some of the information in this column came from the “Paraguay Handbook” page on Joe Hahn’s web site at www.reocities.com/Athens/Atrium/1085.

I downloaded the handbook some years ago and have been adding to it ever since with other information found on the Web.