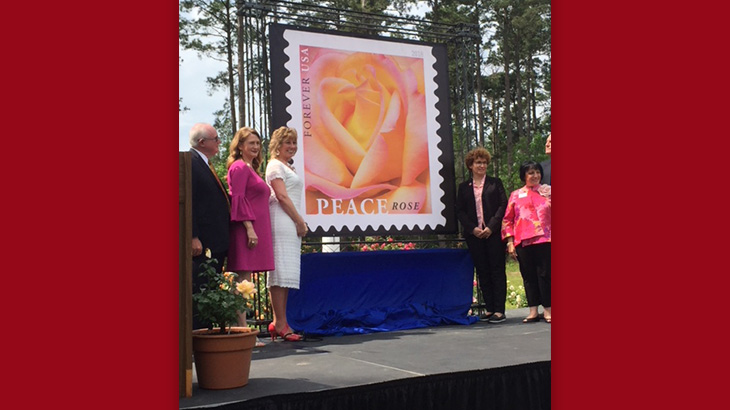 Speakers stand next to the Peace Rose forever stamp April 21 at the stamp's dedication ceremony. Photos courtesy of the U.S. Postal Service. 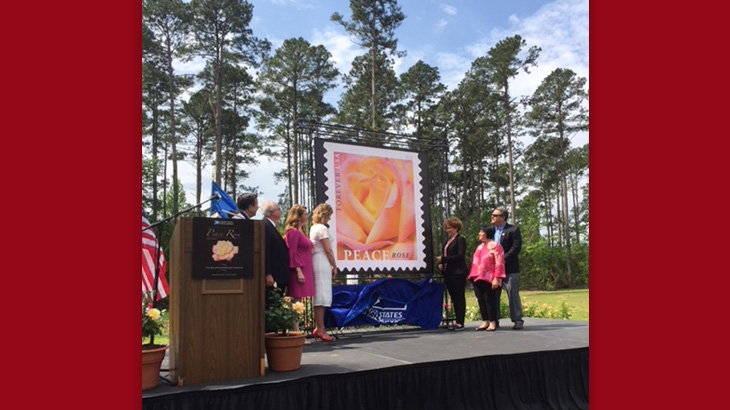 Sonia Meilland-Guibert (first person to stamp's right), the granddaughter of the peace rose creator Francis Meilland, traveled from France to participate in the ceremony. Photos courtesy of the U.S. Postal Service. 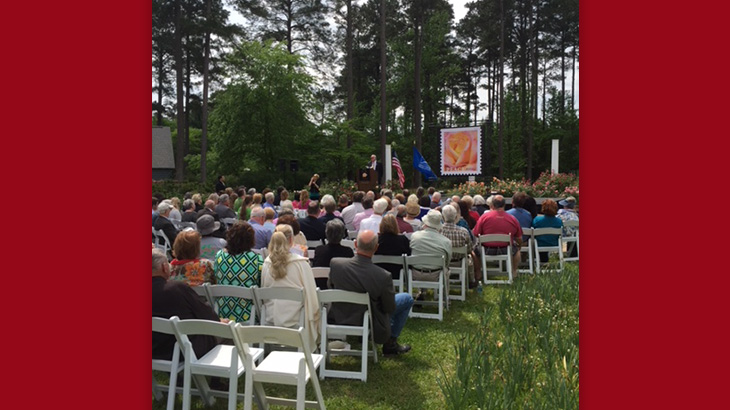 The dedication took place in the Gardens of the American Rose Center in Shreveport, La. Photos courtesy of the U.S. Postal Service.
Previous
Next

On April 21, the United States Postal Service dedicated the Peace Rose forever stamp at the Gardens of the American Rose Center in Shreveport, La., the national headquarters of the 126-year-old American Rose Society. The Peace Rose was developed in 1945.

“The peace rose has a special significance for all who love roses, and all who long for peace in our time,” McKeen said. “This was true in 1945, and it still holds true today.”

McKeen continued by describing the rose’s story. Development began with Francis Meilland and his family in mid-1930s France. In 1935, the Meilland family had crossbred hundreds of roses in an effort to create new commercially viable varieties. One of the attempts is what led to this hybrid tea rose, a robust bloom that was hardy and resistant to disease. In 1939, when France was threatened with invasion, Meilland sent samples to growers in Italy, Germany, and the United States. In time, American grower Robert Pyle safely propagated the budwood, and the new rose was introduced to the public in 1945.

Known formally as Rosa “Madame A. Meilland,” the “peace rose” moniker became its accepted title to honor the peace that came with the end of World War II.

Meilland’s granddaughter Sonia Meilland-Guibert traveled from France to be a part of the ceremony and offer her remarks. Meilland-Guibert is the head of research and development at House of Meilland-Meilland International. Her organization is dedicated to the creation of rose varieties for cut flowers and varieties for garden and landscape.

The stamp’s art features a detail of a photograph of the rose’s blossom — yellow petals with pink edges. Art director Ethel Kessler designed the stamp with an existing photograph by Richard C. Baer.

The stamp is issued in a double-sided pane of 20, a format that the USPS refers to as a booklet.