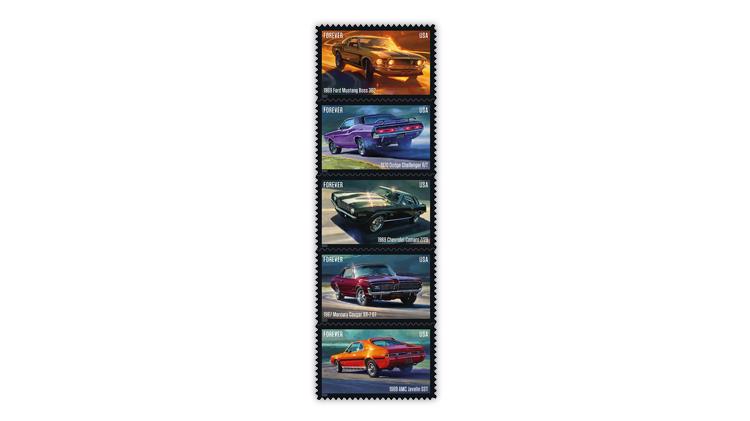 Artist Tom Fritz worked with existing photographs to create the oil-on-panel paintings featured on the five United States Pony Cars commemorative stamps to be issued Aug. 25 at the Great American Stamp Show in Sacramento, Calif. Two pony cars, neither of 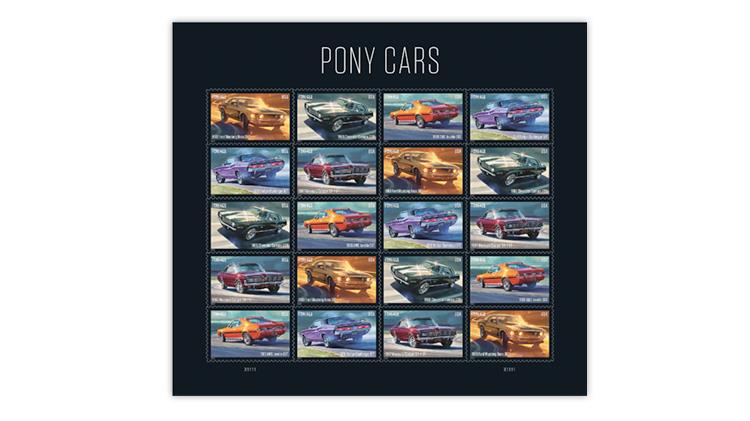 The Postal Service’s preliminary artwork for the Pony Cars pane shows the stamps arrayed in four columns of five, with the stamps in different positions in each column. Two plate numbers appear in the bottom left and bottom right selvage. The unadorned he 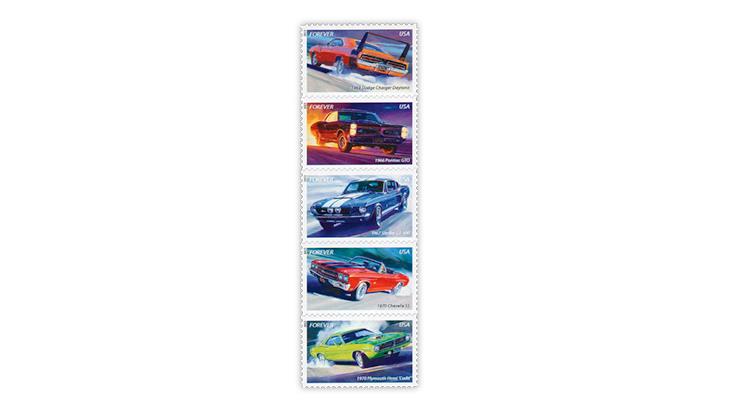 Fritz also created artwork for the five U.S. Muscle Cars stamps issued in 2013. These and the new Pony Cars stamps are the third and fourth issues, respectively, in the America on the Move series that began in 2005.
Previous
Next

“IT’S OFFICIAL!!! I’m extremely proud, honored, and genuinely stoked to finally be able to announce the 2022 release of my second series of five postage stamps for the United States Postal Service!”

This giddy quote comes from artist Tom Fritz of Newbury Park, Calif., who shared his excitement on his Facebook page back in early November 2021, shortly after the USPS first announced that his paintings of five classic pony cars would appear on stamps. Those five forever stamps will be issued Aug. 25 in conjunction with the Great American Stamp Show in Sacramento, Calif.

No doubt Fritz will carry his keen enthusiasm with him while he is in attendance at the show.

The center is the site for Great American Stamp Show, the nation’s largest annual philatelic gathering that brings together dealers, collectors, exhibits and much more.

Scott Bombaugh, chief technology officer and executive vice president of the Postal Service, will serve as the dedicating official.

Collectors desiring to attend the free public ceremony are required to register with the USPS. Each attendee may invite up to a maximum of three guests, according to the USPS.

According to the USPS, Fritz created his oil-on-panel paintings of the pony cars using photographs as a reference. Zack Bryant and Greg Breeding, both of Charlottesville, Va., served as designer and art director, respectively.

Ashton Potter (USA) Ltd., one of two contract printers for the Postal Service (the other is Banknote Corporation of America), offset-printed 45 million Pony Cars stamps (9 million of each design) that were finished into 2.25 million panes of 20 for sale at post offices; Stamp Fulfillment Services in Kansas City, Mo.; and other venues approved by the USPS to sell stamps.

The Postal Service’s preliminary artwork for the pane, illustrated here, shows the Pony Cars stamps arrayed in four columns of five stamps each, with the stamps in different positions in each column.

The vehicle’s production year, make and model appear in the bottom left or bottom right corner of the stamps. “FOREVER” and “USA” are lettered in the top left and top right corners, respectively.

“Pony Cars” is printed in capital letters across the top of the header of the pane of 20. The stamps’ colorful designs stand out against the black selvage borders and header.

On the stamps, various shades of gray can be seen in the backgrounds and the shadows cast by the cars.

Fritz’s paintings impart a realistic effect of motion for each of the five cars.

For example, the Dodge Challenger is trailing smoke from its rear tires, burning rubber, as the car accelerates at a high rate of speed.

The Ford Mustang and Mercury Cougar are shown executing hard turns, which causes the cars to lean opposite to the direction of the turn.

On April 17, 1964, the general public got its first look at a new breed of car when Ford Motor Co. introduced what would come to be known as the first pony car: the Mustang, the brainchild of Lee Iacocca (1924-2019). In 1961, he first envisioned what would become one of the world’s most popular cars.

According to Classic Pony Cars, Iacocca’s “vision was a car that would seat four people, have bucket seats, a floor mounted shifter, be no more than 180 inches long, weigh less than 2500 pounds, and sell for less than $2500.00.”

Many months of meetings and marketing surveys followed before Iacocca secured funding for the Mustang in 1962. The first production model galloped off the assembly line on March 9, 1964.

In the ensuing decades, other car manufacturers would add to the stable of pony cars.

The 2013 Muscle Cars and this year’s Pony Cars stamps are the third and fourth sets, respectively, in the Postal Service’s America on the Move series that first drove into view in 2005 …