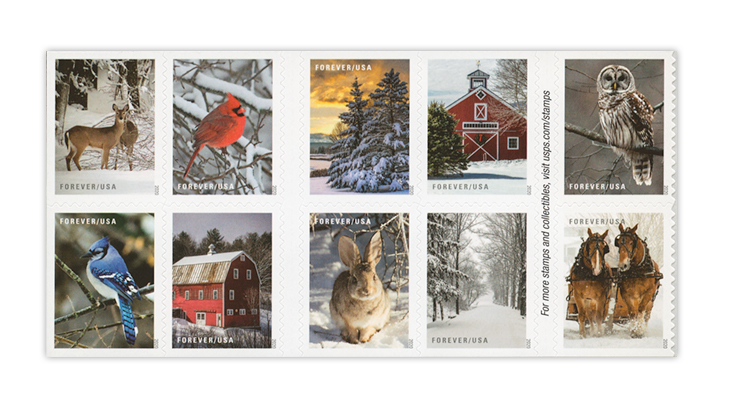 Winter scenes in Vermont are shown on five of the 10 new Winter Scenes forever stamps issued Oct. 16. Two of the stamps show photographs taken in Utah and Virginia, and the remaining three stamps feature pictures likely taken in the Midwest.

The 10 different stamps were issued in a double-sided pane of 20 (convertible booklet).

In mid-October Linn’s asked the United States Postal Service to identify the photographers that captured the scenes on the new stamps.

Gerald A. DeBoer snapped the picture of the cardinal, and the remaining five photographs of horses, two barns (on two separate stamps), evergreens and the snowy lane were captured by Lisa Lacasse of Quechee, Vt.

Lacasse’s photographs are the most by any one photographer for the Winter Scenes issue, and all are attributed to having been taken in the Quechee Lakes resort community.

Lacasse shared with Linn’s that she specializes in photography of landscapes, nature scenes and birds. Her work can be seen on her website.

It is interesting to note that it appears the Postal Service might have lightened the background on the stamp featuring horses pulling a sleigh by obscuring the driver of the sleigh and the house in the background. Both are still visible on the issued stamp, but they appear much lighter than the original photograph.

Lacasse provided Linn’s with descriptions of the photos on each of the five stamps:

“Mike and Burt, the Belgian Draft horses: Mike and Burt, pull the sleigh that bring skiers from the base lodge to the lift at the Quechee Ski Hill, and I have been photographing them for years. I was mostly comfortable squatting down in front of them as they came up this little rise so I could capture this angle of the horses kicking up the fresh snow and making it appear that they are running right out of the image.

“After the Snowfall is the snow-covered road taken in Quechee, Vt. A classic scene in this part of the world. I headed out as soon as the snow stopped and found this pristine snowy road and snow-covered trees. I composed it so that the vanishing point pulls your eye through the scene and makes you wonder what is down that road.

“Snowy Morning at Sunrise with the snow-covered trees is on the Quechee Lakes Golf Course. For sunrise photography, I am at location at least 30 minutes before sunrise and this was no exception. Photographing freshly fallen snow is a timing issue — you want to get out before any tracks are made and before the wind takes the snow off the trees. Waiting for Mother Nature to show her colors required patience, but eventually the clouds broke up enough for that orange sunrise color to shine through behind the snowy trees.

“Mackenzie Barn, Woodstock, Vt., is the home of the red barn that is three stories high with the gambrel roof and built circa 1900. What’s not to love about a red barn and snow. The light was just perfect for this shot and what drew me in was the three stories — the windows and the lines of the barn make it such an original structure.

“Red Barn with Wreath it was taken in Stowe, Vt, just up the road a piece. The wreath is what caught my eye first and made me back up to the car to make the shot — classic Vermont.”

The other five photographs were sourced via the Shutterstock website as royalty-free stock photographs.

Carter, who took the photograph of the pair of deer, told Linn’s, “The photograph was taken in Wytheville, VA (Southwest Virginia) during a snow storm in March of 2018. It was actually taken in my front yard.” For the stamp design, USPS art director Derry Noyes cropped the horizontal photograph to remove a third deer at right from the scene.

Wright, who took the rabbit photograph, told Linn’s the photo was taken in January 2016 in “Southern Utah near St. George.”

She said, “We don’t often get snow here so when it does happen I try to take advantage of it. This day I wasn’t able to go very far, just to a walking trail on the outskirts of a local golf course. It was early in the morning with the sun just up and I’d been out looking for some new views to photograph at the end of the trail.

“On the way back I saw this cottontail rabbit soaking up some morning sunshine near the shelter of a bush with snow still fresh on the ground around it. This is the last of four pictures I got of the rabbit.”

Linn’s was unable to locate contact information for Ives, DeBoer or Espe.

On the Shutterstock website, Ives described his owl photograph as “Barred Owl in the early morning.” His biography identifies him as a photographer in the Midwest United States.

DeBoer described his cardinal picture as a “Photograph of a brilliant red male Northern Cardinal amidst Midwestern winter branches covered with snow.” The only Midwest state in his keywords list on the Shutterstock website is Wisconsin, so it is quite possible that is where this photograph was taken.

Lastly, Espe’s photograph of the blue jay is described as “Beautiful blue jay — corvidae cyanocitta cristata — a passerine bird perched on a branch.” He did not provide any keywords identifying a state location, but many of his stock photographs seem to be in areas of Minnesota.