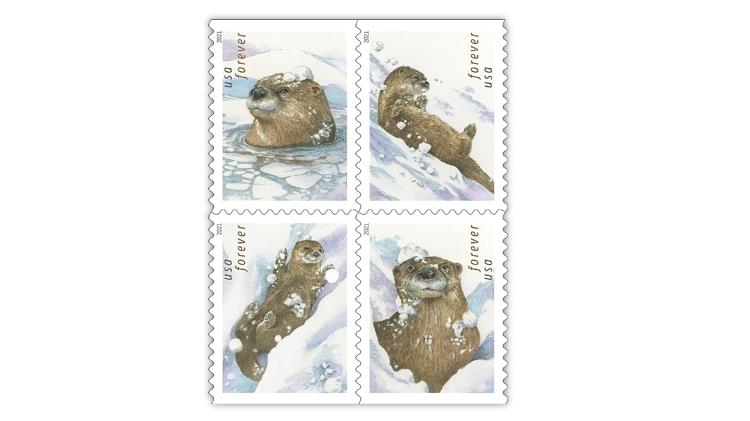 Four new forever stamps depicting river otters playing in winter ice and snow will be issued Oct. 12 in Otter, Mont. The stamps will be sold in double-sided panes of 20. 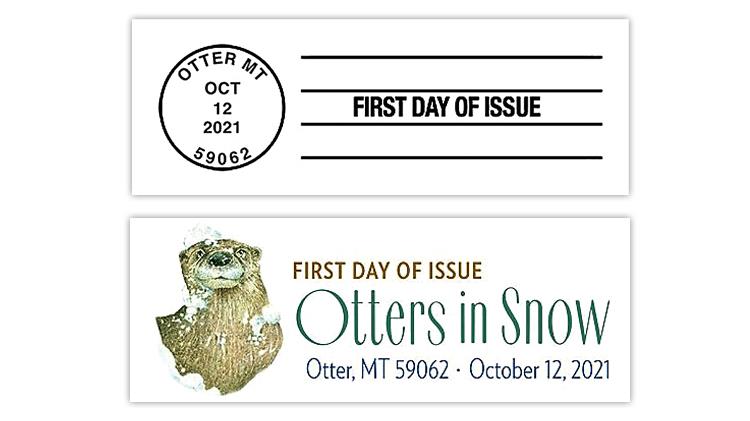 The Postal Service is offering two first-day cancels for the Otters in Snow stamps. The full color postmark features the stamp image of the otter in the snowbank.
Previous
Next

A set of four Otters in Snow forever stamps will be issued Oct. 12, continuing a recent tradition by the United States Postal Service of offering stamps with a wintry theme near the end of the year.

In this case, the nondenominated (58¢) stamps are the final U.S. issue scheduled for 2021.

The four stamps feature artwork by John Burgoyne, with each stamp showing a single otter playing or posing within a white winter scene.

The stamps will be issued in double-sided panes of 20, a format that the Postal Service describes as a booklet, offset-printed by Banknote Corporation of America. USPS art director Derry Noyes served as designer for this issue.

The stamps will not have a first-day ceremony sponsored by USPS headquarters, but word has reached Linn’s that the post office in Otter, Mont., the designated first-day site for the new issue, will host a local event on the day of issue.

According to Dave Rupert, a USPS communications manager for the Western Pacific region, the ceremony is planned for noon local time at the Otter post office at 268 Otter Creek Road.

Otter is an unincorporated community in Montana’s southwestern Powder River County, in the Custer National Forest. According to reports online, not all of the roads approaching the site are paved. The historic post office there was established in 1895.

“The original illustrations were rendered in pen and ink with watercolor, in a color palette consisting of shades of brown for the otters, with black facial features and crosshatching. The wintry background is white, with blue water, light blue and violet shadows, and black crosshatching.”

The four designs highlight the otter’s playful spirit with whimsical scenes and expressions.

Full color pictorial first-day cancels found on covers marketed by the Postal Service and others prepared by some cachetmakers will replicate the stamp image of the otter in the snowbank, and include decorative text spelling out “Otters in Snow.”