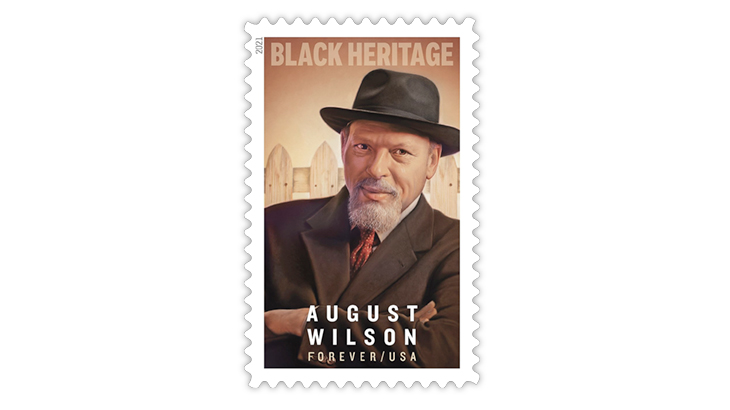 The 44th stamp in the United States Black Heritage commemorative series will honor playwright August Wilson. The stamp will be issued Jan. 28, 2021.

The United States Postal Service on Dec. 8 announced an addition to its stamp program for 2021.

August Wilson (1945-2005), a prominent playwright twice honored with the Pulitzer Prize for drama, will be celebrated on a forever stamp Jan. 28.

The nondenominated (55¢) stamp will be the 44th in the Black Heritage commemorative series and will be issued in a pane of 20.

The Postal Service has scheduled a virtual first-day ceremony that will take place on the issue date at 11:30 a.m.  Eastern Standard Time. The event will be shown live on the USPS Facebook and Twitter social media channels. Details for viewing the event live are available on the USPS website.

The official city of issue is Pittsburgh, Pa., where Wilson was born and raised. The setting for many of his most famous plays is Pittsburgh’s Hill District.

“One of America’s greatest playwrights, Wilson is hailed as a trailblazer for helping to bring nonmusical African American drama to the forefront of American theater,” the Postal Service said in announcing the new issue.

The stamp’s preliminary design shows a portrait of Wilson with his arms crossed in front of him, modeled on a 2004 photo of the playwright by David Cooper.

Behind Wilson in the stamp design is a simple wooden fence.

Wilson’s best-known plays include Fences, which received the 1987 Tony award for best play and the 1987 Pulitzer for drama, and The Piano Lesson, Wilson’s other Pulitzer winner (1990).

A new film, Ma Rainey’s Black Bottom starring Chadwick Boseman and Viola Davis, is based on Wilson’s 1984 play of the same name. The film opened to a limited theatrical run Nov. 25.

The August Wilson stamp was not included in the Nov. 17 Postal Service announcement of new stamps planned for the coming year.

The initial details of the 2021 stamp program were reported in the Dec. 7 Linn’s Stamp News.