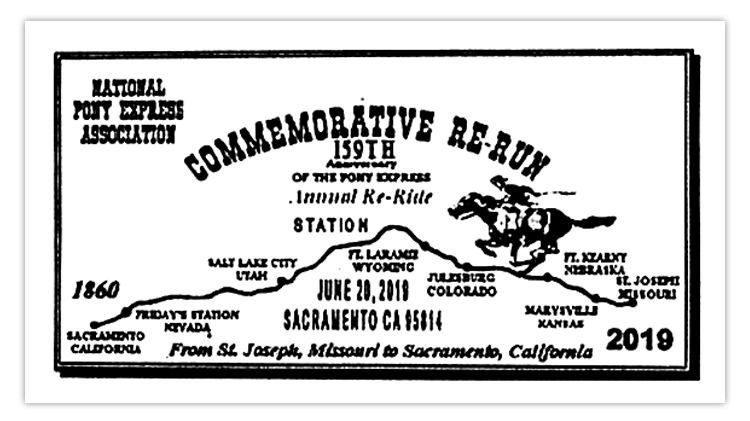 A pictorial postmark for the Pony Express Commemorative Re-Ride held annually in June has been extended for 30 days.

The original Pony Express was in operation for 18 months, between April 1860 and October 1861.

“Young men once rode horses to carry mail from Missouri to California in the unprecedented time of only 10 days,” according to the National Pony Express Association. “This relay system along the Pony Express National Historic Trail crossing eight states was the most direct and practical means of east-west communications in 1860.”

The association recreates this mail system with more than 650 riders covering 1,966 miles and riding 24 hours a day. Each participant rides a leg and hands off a mochila (saddle pouch) at preassigned locations. The mochila contains roughly 1,200 pieces of mail.

The Re-Ride in June 2020 will mark the 160th anniversary of the Pony Express. For more information about the program, visit the website of the National Pony Express Association.

To obtain the postmark address your request to: