Press sheets without die cuts sell out within days, or less 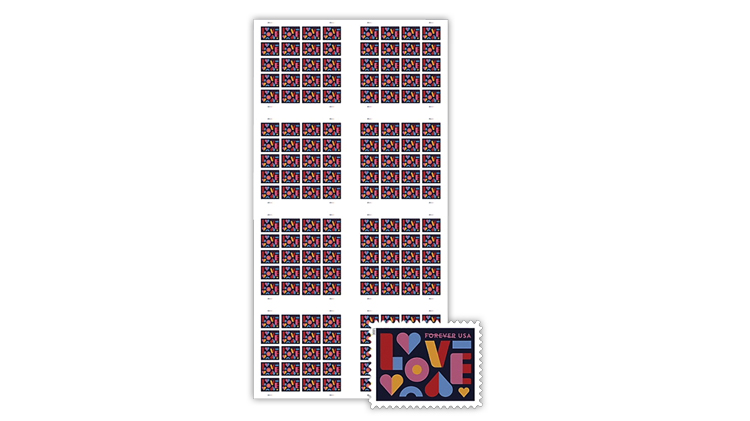 Press sheets like this example for the 2021 Love forever stamp, but issued without die cuts, have sold out quickly for the four issues of 2021 offered so far, leaving some collectors disappointed they could not obtain them. Image from USPS Postal Store on

But the excitement changed to disappointment for many when the press sheets sold out quickly — in some cases, too quickly for even the most eager customers to obtain them.

In February 2016, the USPS discontinued marketing press sheets that have no die cuts separating the individual stamps on the sheet after offering them for sale for more than three and a half years.

The first no-die-cut press sheet of 2021, for the Love forever stamp issued Jan. 14, was at least on sale for a few days before it disappeared from the Postal Store website, online at https://store.usps.com/store.

Postal Service spokesman Roy Betts confirmed to Linn’s Stamp News that the item was removed from the site because a low quantity remained in stock.

The next press sheet to be issued was for the August Wilson forever stamp, which came out on Jan. 28.

Collectors reported that the August Wilson press sheet without die cuts was available on the website for barely a day before its listing also was taken down.

The listing for the Year of the Ox press sheet without die cuts issued Feb. 2 also disappeared within a day, according to reports, and some collectors who ordered that sheet from the Postal Service site say they were sent the press sheet with die cuts instead, the result of an item number error on the website.

Further complicating matters is the fact that for much of the past year, the customer call center for Stamp Fulfillment Services has not been accepting telephone calls for stamp orders because of the COVID-19 pandemic, according to the recording reached by dialing the toll-free number for ordering.

That leaves collectors with the website option as the primary access point for ordering, and sparked questions about how the Chien-Shiung Wu press sheet could be sold out without ever appearing on the website.

Collectors do have the option of ordering press sheets by mail from the USA Philatelic catalog (the retail catalog published by the Postal Service and mailed to its regular stamp customers), but the catalog specifically states that “Press sheets are not available for preorder.”

It’s worth noting that three of the four press sheets with die cuts issued to date this year also sold out quickly. Only the August Wilson stamp in that format was still offered on the Postal Store website as of Feb. 18.

However, another 21 press sheets with die cuts from previous years remain available.

The sellout of the 2021 sheets leaves open the question of whether very few press sheets were processed and made available for retail purchase, or if an unexpectedly large number of collectors were placing orders for them.

In response to a Linn’s request for the quantities of the no-die-cut press sheets made available for sale for the four issues in question, Betts replied that according to the USPS Stamp Services division, the Postal Service does not announce quantities produced and has not done so for a number of years.

How will collectors view the return of press sheets without die cuts?