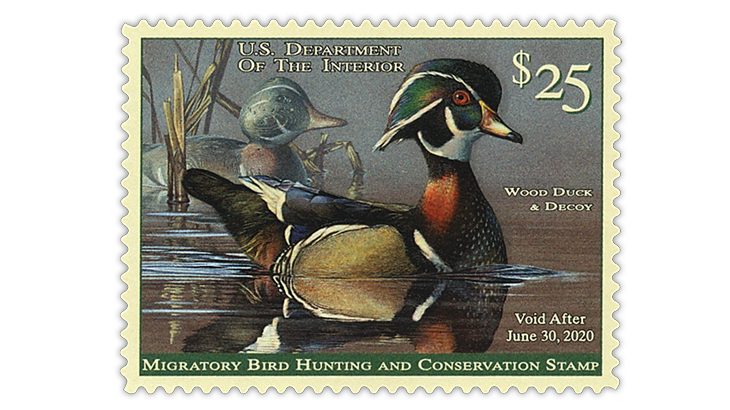 Artwork featured on the 2019 United States Federal Duck Stamp included a wood duck decoy. A proposed permanent government regulation would require artists to include a “hunting element” for the artwork to be considered for the duck stamp.

The government agency that oversees the federal duck stamp program has proposed a permanent rule change to require stamp artists to include a visual element that celebrates waterfowl hunting.

“In this proposed rule, we propose to specify a permanent ‘celebrating our waterfowl hunting heritage’ theme and the mandatory inclusion of an appropriate hunting element beginning with the 2020 Contest,” the United States Fish and Wildlife Service stated in its Jan. 29 filing in the U.S. government’s Federal Register.

The proposed rule change would be a permanent revision nearly identical to the one-year change that affected artwork submitted for the 2018 federal duck stamp art contest, which selected the art that eventually appeared on the federal stamp issued in 2019.

The 2019 $25 stamp (Scott RW86) reproduces Scot Storm’s painting of a wood duck in the foreground and a hunter’s decoy.

Complying with the 2018 requirement, other contestants who submitted artwork that year included background images of hunters with firearms observing or taking aim at waterfowl.

Several chose to show decoys or other elements, including duck blinds, shotgun shells, duck hunting calls and so on.

A few of the submitted entries in 2018 appeared to ignore the hunting element requirement and simply depicted the duck in a natural setting.

In 2019 entries in the federal duck stamp art contest were not bound by a requirement to include a hunting element.

The new rule change proposal will also affect who can judge the annual art contest.

In little more than a week, 50 individuals submitted public comments in response to the proposed rule changes. Most of the comments expressed opposition to the changes.

“If made permanent, this proposal will limit, not advance, the Stamp or the Stamp Art Contest,” wrote William Guion. “The limits placed on the creativity of artists by this rule will contribute to the already steady decline in the number of contest entries. We greatly appreciate the hunting community. They have provided most of the dollars to support the purchase of wetlands in America. Even with their current unwavering support the number of stamps purchased continues to decline as the number of hunters decline.”

Alastair Lloyd wrote: “Adding unnecessary restrictions will only sway artists away from creativity, and requiring a hunting theme will discourage non-hunters from purchasing the stamps. As a hunter and life-long bird lover, I know that many people are uncomfortable with the idea of killing birds, and would not appreciate stamps that depict this activity.”

Some of the individuals commenting who were opposed to the change identified themselves as artists who participate in the annual federal duck stamp art contest.

Allison Daly self-identified as an artist and a hunter and offered an alternative: “ … I do support the American hunting heritage being a focus for the 2021-2022 Duck Stamp, but not as a permanent change going forward. As conservationists we should strive for more inclusive actions, and continue to support the most important aspect; the wild others and their wild homes.”

The public can continue to comment on this proposed rule change up to March 16 using one of two methods.

To comment using the Federal eRulemaking Portal, follow the instructions for submitting comments on Docket No. FWS-HQ-MB-2019-0105.

Comments by email or fax are not accepted. Public submissions are published online in full along with any personal identifying information.

The art contest winner receives no compensation other than a pane of stamps carrying the artist’s design signed by the Secretary of the Interior. However, the artists can profit by selling prints of their work, which are sought by wildlife art collectors, stamp collectors and others.

Waterfowl hunters 16 years of age or older are required to purchase federal duck stamps, but they are also bought by nonhunting stamp collectors, conservationists and wildlife art enthusiasts, among others.

The U.S. Fish and Wildlife Service notes that by law, 98 percent of the purchase price goes directly to help protect wetlands and associated habitats.

Although they are not valid for postage, federal migratory bird hunting and conservation stamps, commonly known as duck stamps, are popular collectibles.

The annual federal stamps are listed as “Hunting Permit Stamps” and valued with U.S. revenue stamps in the Scott Specialized Catalogue of United States Stamps and Covers, and in Vol. 1 of the Scott Standard Postage Stamp Catalogue.