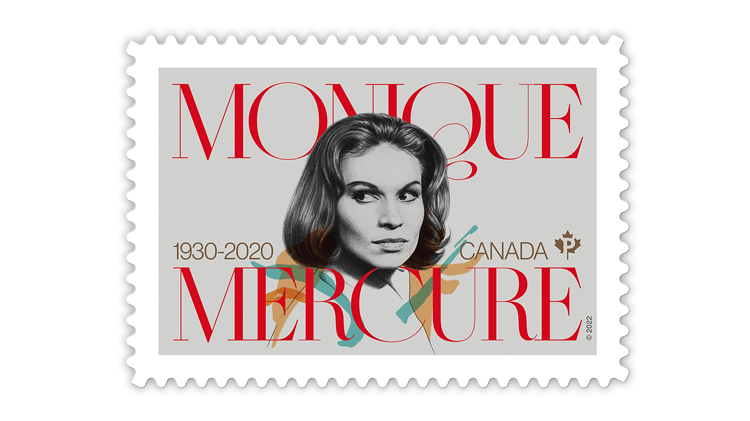 Canada Post celebrates the life and accomplishments of actress Monique Mercure on a stamp to be issued Nov 14. Mercure was born Nov. 14, 1930, and died May 16, 2020.

Canada Post commemorates Monique Mercure, Quebec’s grande dame of stage and screen, on a Nov. 14 stamp issue that coincides with the anniversary of the actress’s birth.

“Known for her fiery spirit, versatility and powerful performances, Mercure (1930-2020) was one of Canada’s most beloved and acclaimed actresses,” Canada Post said.

The stamp design features a black-and-white image of Monique Mercure with her first name in large red letters at the top of the stamp and her last name at the bottom. The sections of the image showing her face and hair are superimposed over the red text.

This permanent-rate stamp, designated by the letter “P” inside the maple leaf at the right of the stamp, pays the basic domestic letter rate (currently 92¢).

In 1977, Mercure became the first Canadian to win the Palme d’Or award for best actress at the Cannes Film Festival for her role in J.A. Martin photographe.

Before acting, Mercure spent her childhood and early adult years studying music and dance. Her acting career took off in the 1960s, and her film debut came in 1963’s A tout prendre.

During the next six decades, Mercure built a resume that included performances in more than 100 classical and contemporary plays and more than 80 films and television productions.

Mercure’s dedication to her craft was apparent. Canada Post noted that her performance in a play prevented Mercure from receiving the prestigious Palme d’Or award in person. Therefore, she had her acting partner Marcel Sabourin accept the award on her behalf.

“Steven Spielberg once said in an interview that the only thing missing in his career was winning a Palme d’Or award in Cannes,” Canada Post quoted Sabourin as saying. “And here we have Monique Mercure, a very ordinary woman from Quebec, who managed that exact feat. And she wasn’t even there. She was performing on stage.”

Mercure had roles in several other popular films aside from the film that won her the Palme d’Or award, including Mon oncle Antoine (1971), Naked Lunch (1991) and The Red Violin (1998). Television appearances included regular roles in the French-language series Providence (2005-11) and Memoires vives (2013-16).

Canada Post said she was named a fellow of the Royal Society of Canada and a grand officer of the National Order of Quebec.

Mercure received an honorary doctorate from the University of Toronto in 1998, according to an article published in the Montreal Gazette two days after her death on May 16, 2020.

The article also quoted some of the numerous tributes posted on social media for the late actress, including one from Canadian Prime Minister Justin Trudeau, who said Mercure “helped promote Quebec cinema beyond our borders and her legacy will live on through her work.”

This stamp issue follows other notable stamps from Canada Post celebrating Canadian actors and actresses, such as ...