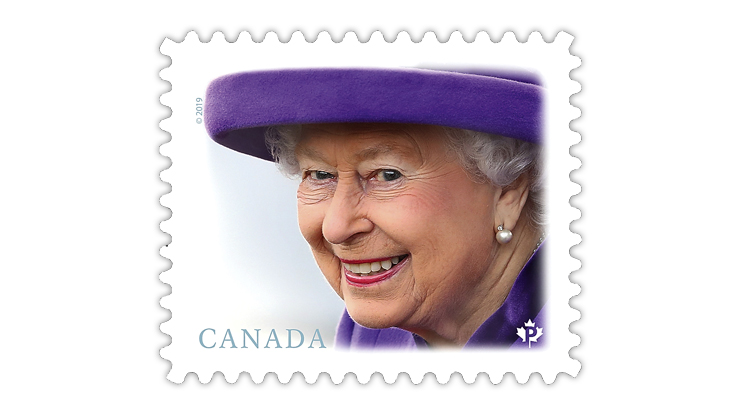 Canada issued on Jan. 14 this Queen Elizabeth II definitive permanent-rate stamp in a booklet of 10.

A closely cropped image of the face of Queen Elizabeth II framed by her purple hat brim and jacket appear on a new stamp issued Jan. 14 by Canada Post.

The nondenominated permanent-rate stamp (now 90¢) is being sold in booklets of 10. The stamps accommodate a 5¢ increase in the domestic first-class rate that went into effect on the same day as the stamp’s release. It was Canada’s first rate increase since 2014.

The stamp features a photo by Chris Jackson taken in 2017 in Portsmouth, England. Jackson is Getty Images’ royal photographer. The stamp was designed by Steven Slipp, whose work has appeared on more than 20 Canadian stamps.

Slipp took an in-depth look at past stamps featuring royalty, according to Canada Post’s Details magazine.

“It was a real philatelic education, researching and comparing the stamps of our monarchs over more than a century and a half,” Slipp said in Details. “It was also a time-warp for a print nerd like me to see how the techniques and technologies used to create stamps have evolved since the queen’s coronation.”

Slipp focused his image research on recent photos. An important factor, he said, was that the photo had to work at the diminutive dimensions.

“I felt we could crop tightly to her face and have the hat brim frame this engaging portrait,” he said.

The stamp was printed in five-color lithography by Lowe-Martin and measures 20.25 millimeters by 23.5mm.

The stamp has tagging showing images of maple leaves and the royal cipher that appear under ultraviolet light. The “EIIR” beneath the crown on the cipher stands for “Elizabeth II Regina.”

The first-day cover, with a print run of 7,000, has an Ottawa, Ontario, maple leaf postmark. The front of the cover also shows a brooch that has special significance in Canada. On the reverse is a portrait of the queen wearing the brooch to mark Canada’s 150th anniversary in 2017.

King George VI gave the brooch to the queen mother in 1939 to mark the couple’s first Canadian Royal Tour. Queen Elizabeth II (then Princess Elizabeth) later wore it during her first Canadian royal tour in 1951.

The tradition of wearing the brooch on a first royal tour of Canada has continued through generations with the Duchess of Cornwall doing so in 2009, followed by the Duchess of Cambridge in 2011.

Born April 21, 1926, Elizabeth was 25 when she assumed the throne Feb. 6, 1952, upon the death of her father, King George VI. Her formal coronation — which celebrated its 65th anniversary last year — was held June 2, 1953, in Westminster Abbey. Queen Elizabeth is the head of state of 15 Commonwealth realms, including Canada, in addition to the United Kingdom.