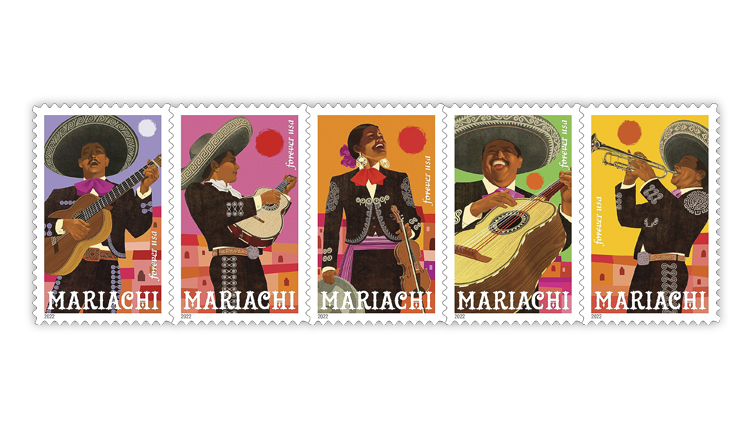 Mariachi, a style of folk music steeped in the history of Mexico that has firm roots in the United States, will be celebrated July 15 when the U.S. Postal Service issues a set of five nondenominated (60¢) commemorative forever stamps.

The new Mariachi stamps are the first to be issued at the new 60¢ first-class letter rate that went into effect July 10 along with other postal rate increases.

An official first-day ceremony for the Mariachi stamps is set to take place at 11:30 Mountain Daylight Time in conjunction with the Mariachi Spectacular de Albuquerque at the Albuquerque Convention Center, 401 Second St. NW, Albuquerque, N.M.

Those desiring to attend the ceremony, which is free and open to the public, are encouraged by the USPS to register online. On the form, each registrant can invite up to a maximum of four additional people.

Mariachi Spectacular de Albuquerque is the premier annual event that brings together mariachi enthusiasts and musicians from New Mexico, the rest of the United States and around the globe.

“Mariachi Spectacular de Albuquerque’s mission is to promote culture, arts, and excellence in art education contributing to the cultural understanding and appreciation of Mariachi folk music and dance in New Mexico and beyond,” according to the organization’s website.

According to the Postal Service, the five Mariachi stamps will be sold at post offices across the country in panes of 20 containing four of each stamp. Postal clerks must sell panes intact; panes may not be broken to sell stamps individually.

According to the Postal Service’s production details, a pane of Mariachi stamps features a decorative header with the word “Mariachi” rendered in capital letters.

A plate number consisting of a “B” followed by four single digits is printed in the bottom two corners of a pane. The “B” is shorthand for the printer, and each of the four numbers represents one of the four process colors used to print the stamps: black, cyan, magenta and yellow.

“Each of the five new stamps in this pane of 20 features a musician, dressed in traje de charro, the traditional outfit of mariachi performers, playing one of five iconic mariachi instruments: guitar, guitarrón, vihuela, violin, and trumpet,” the Postal Service said.

The guitarron is a large, fretless six-string bass guitar, and the vihuela is a five-string guitar similar to an instrument from the Spanish Renaissance.

Lopez was inspired by childhood memories of mariachi music when he designed the stamps.

“Mariachi music is an emblem of Mexican cultural heritage with roots in the United States and followers around the globe,” he said.