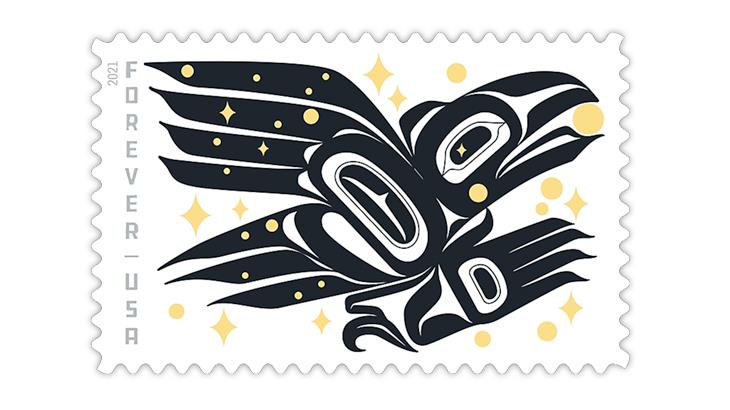 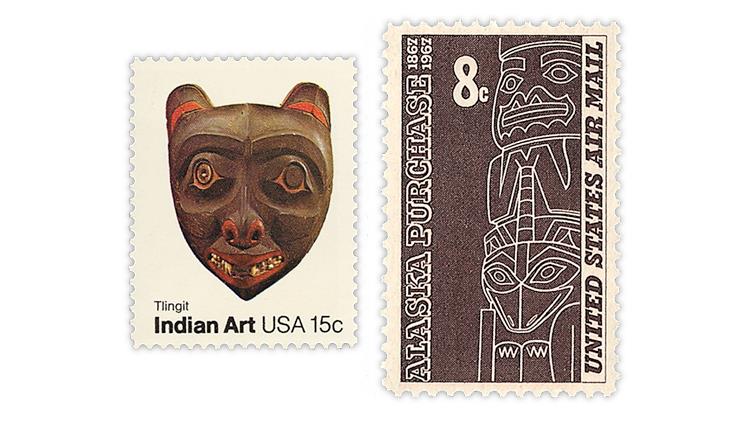 A Tlingit mask appears on a 15¢ stamp issued in 1980, one of a set of four picturing Pacific Northwest Indian masks. A Tlingit totem pole is shown on an 8¢ airmail stamp issued in 1967 to celebrate the 100th anniversary of the Alaska Purchase. 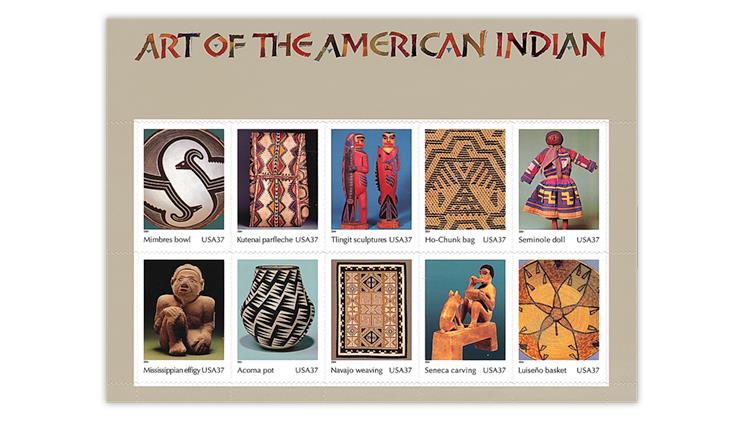 One of the stamps in the 2004 37¢ Art of the American Indian pane of 10, the third stamp in the top row of five, pictures two Tlingit sculptures. 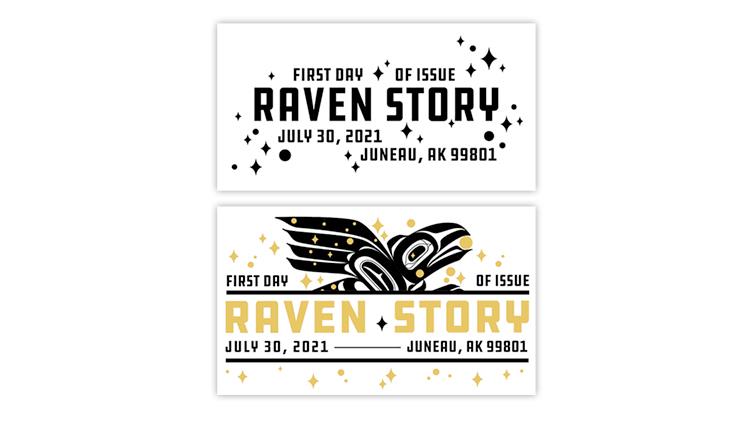 The black and color pictorial first-day postmarks for the Raven Story stamp feature design elements seen on the stamp, including stylized stars and circles. The gold circle in Raven’s mouth on the color cancel represents the sun.
Previous
Next

Raven, a character central to creation stories and other mythical sagas of Indigenous peoples of the Northwest Coast, will take flight July 30 on a new forever commemorative stamp from the United States Postal Service.

Banknote Corporation of America printed a quantity of 18,000,000 self-adhesive stamps in panes of 20 on its Gallus RCS press. The pane is arranged in five rows of four stamps with a simple decorative header that reads “RAVEN STORY” in gray block letters.

The stamp’s design is dominated by artist Rico Worl’s bold black image of Raven rendered in formline, a traditional style of Indigenous people of the northern Northwest Coast, according to the Postal Service. Worl, who is of Tlingit/Athabascan heritage, is a social artist and designer who is also trained in anthropology.

On its website, the Milwaukee Public Museum describes formline as “the highly stylized use of lines common in Northwest Coast art characterized by constantly varying widths and a smooth, calligraphic quality. Ovoids, S-forms, and U-forms, distinctive of Northwest Coast art, are perhaps the most obvious examples of the calligraphic quality of formlines.”

On the stamp, Raven is set against a white background. Gold diamond-shaped stars and circles are seen on the bird’s body and background. A gold circle representing the sun is held in the bird’s beak. “FOREVER USA” is printed in gray down the left side of the stamp.

Antonio Alcala, the Postal Service’s art director for the Raven Story stamp, contacted Worl about creating the art for the stamp after seeing his work for sale at the gift store in the National Museum of the American Indian in Washington, D.C., according to a Nov. 19, 2020, press release from the Sealaska Heritage Institute.

In that press release, Worl described the Raven story that animated his design for the stamp:

“Many depictions of this story show Raven with the Sun in his mouth representing the stealing of the Sun. I was trying to showcase a bit of drama. The climax of the story is after Raven has released the sun and the moon and has opened his grandfather’s final precious box, which contained the stars.

“In this design I am imagining Raven in a panicked state of escape — transforming from human form to raven form and holding on to as many stars as he can while trying to escape the clan house.”

He added: “I think it’s a moment we all feel at times. A moment before we accomplish a goal when we may feel frazzled and have trouble holding everything together in our hands, while trying to accomplish multiple goals at the same time. Even the greatest among us experience the moment that is on the cusp between accomplishment and failure.”

Raven’s strength and fortitude are evident in many of the stories about this mythical creature, but the bird is also known to pull tricks, according to the American Museum of Natural History.

“In northern Northwest Coast mythology, Raven is the powerful figure who transforms the world,” the museum states on its website.

“Stories tell how Raven created the land, released the people from a cockle shell, and brought them fire. Raven stole the light and brought it out to light up the world. Yet Raven is a trickster — often selfish, hungry, and mischievous. He changes the world only by cleverly deceiving others in his never-ending quest for food.”

Various art forms of the Tlingit people have appeared on past U.S. stamps.

In 2004 the Postal Service issued a pane of 10 37¢ stamps picturing art of the American Indian (Scott 3873). A pair of Tlingit sculptures are illustrated on the third stamp in the top row of five (3873c).

A Tlingit totem pole is shown on an 8¢ airmail stamp (Scott C70) issued in 1967 to commemorate the centennial of the 1867 Alaska Purchase. The totem pole is in the Alaska State Museum in Juneau.

Pictorial first-day postmarks have been prepared by the USPS for its line of uncacheted first-day covers.

The black cancel features the name of the stamp in large capital letters, along with stylized stars and circles like those shown on the Raven Story stamp.

On the black-and-gold color cancel, the top half of Raven, as illustrated on the stamp, is seen above “Raven Story” in large gold capital letters.

Collectors who request first-day postmarks on their own prepared envelopes will receive the black postmark.

A tribute to Western garb on four new U.S. stamps