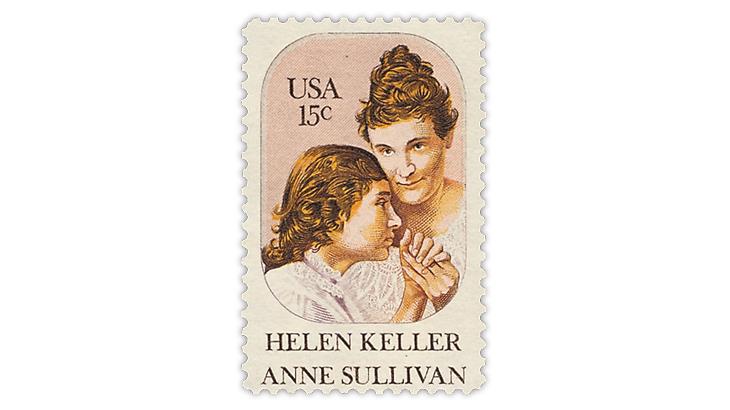 Figure 1. The United States and Brazil both issued stamps in 1980 based on the same 1895 photograph of Helen Keller and her teacher Anne Sullivan, but with greatly differing results. The U.S. stamp was issued June 27, 1980. 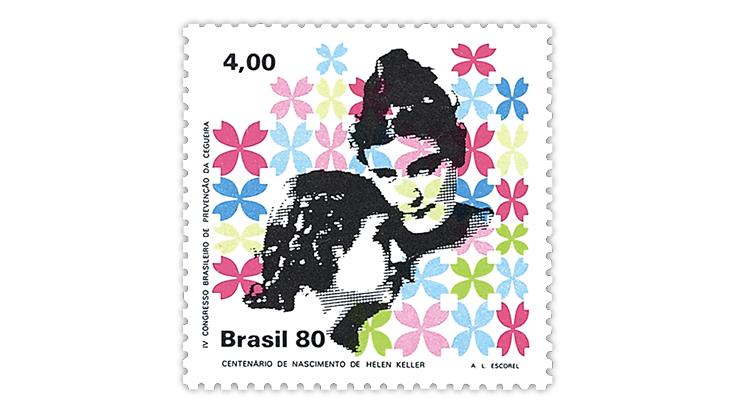 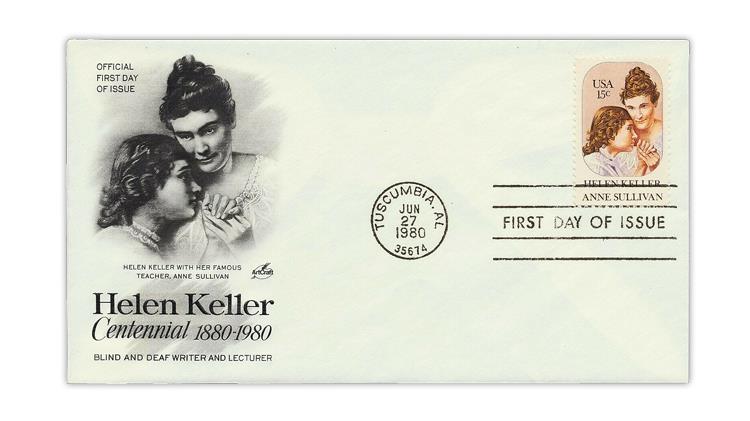 Figure 3. The Artcraft cachet on this first-day cover for the United States Helen Keller commemorative shows a rendition of the photograph on which the stamp’s design was based. Brazil also used the same photograph in designing its stamp for the 100th ann
Previous
Next

The photograph on which the two designs are based was taken in 1895, according to information in early editions of Keller’s 1903 autobiography, The Story of My Life. The photographer is identified as “Falk,” referring to Benjamin J. Falk. Figure 3 shows a rendition of the photo as the cachet on an Artcraft first-day cover.

In the aforementioned 2020 column, I asked Linn’s readers which stamp design they found more attractive or effective. A handful of readers replied, and their comments are worth sharing to give us a chance to cogitate on the difficulties of producing good art on small palettes.

Thomas Broadhead of Knoxville, Tenn., said: “Although I prefer the warmth of the colors of the U.S. stamp, I don’t care so much for the depiction of Anne Sullivan’s eyes in that stamp. The photo shows a bit more of a demure image. It appears as though the Brazilian stamp reflects this. The U.S. stamp appears to show Sullivan staring with an upward gaze and arched eyebrows, which does not reflect the subtle shadowing in the photo.”

Jerry Belber of Brimfield, Mass., did not react to the stamps, but rather listed some of his likes and dislikes in stamp design. He said he is not a fan of stylized, overly busy and abstract designs, but that he is fond of good color combinations, engraving and the inclusion of creative security devices.

Doug Quine of Bethel, Conn., gave four reasons why he thinks the U.S. design is the better of the two.

First, the hands are shown in the U.S. design, and they were the only means available to Keller, who was both deaf and blind, to communicate. Whispering was not an option as the image on the Brazilian stamp implies.

Second, he said that the gratuitous colorful shapes in the background of the Brazilian design had no relevance to the subject.

Third, the format of the U.S. stamp design enables the prominent identification of the two women, while the omission of Sullivan’s name and the small font used for Keller’s name in the Brazilian design lose the point of the image that a partnership of the two remarkable women enabled Keller to achieve her potential despite what were overwhelming obstacles at the time.

Fourth, the conversion of the color and grayscale range of the image to stark black-and-white in the Brazilian design makes the human images appear harsh or tragic, while the story of Keller and Sullivan is one of compassion, teaching and support.

David Cohen of Rockville, Md., sent this brief and thoughtful comment: “I think the U.S. design is better because the vertical design shape conveys the connection between Keller and Sullivan more effectively. That gets a little lost in the square shape of the other stamp.”

George Schaetzle of Sheboygan, Wis., commented: “I prefer the U.S. version hands down. On the one hand, the artwork on the U.S. stamp is more refined and detailed. The Brazilian stamp appears to be just a woman comforting a young girl. On the other hand, the U.S. stamp shows the women’s hands which were instrumental in Helen’s learning about the world. One would not know that the Brazilian stamp had anything to do with the education of Helen if her name did not appear on the stamp.”

There you have it. The U.S. design, if imperfect, gets the nod as the better of the two efforts.

During my 12 years on the Citizens’ Stamp Advisory Committee, I came to admire the particular talent for creating designs for a tiny space that must convey essential information, while still making a visual and comprehensible connection to the viewer.

We may like or dislike a particular effort, but it is no easy task to accomplish good stamp art.