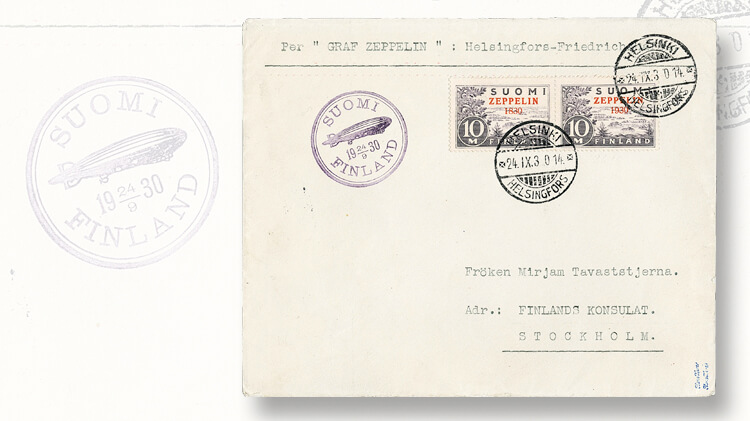 This zeppelin cover from Finland franked with a pair of that country’s first airmail stamp has an overprint error on the stamp at left. The cover will be offered in the upcoming Siegel auction. 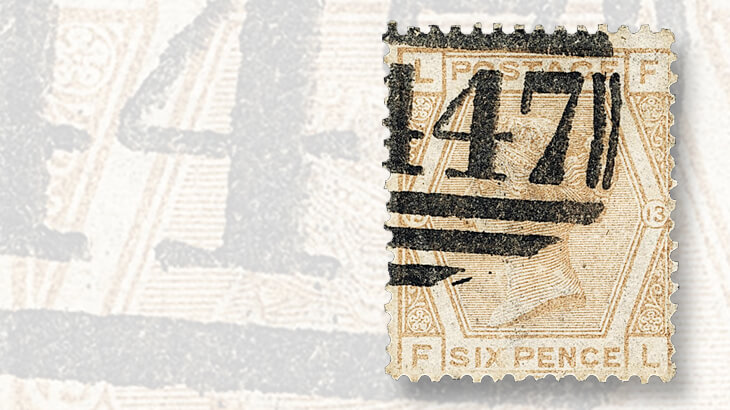 This example of the 1873 buff color variety of Great Britain’s 6-penny Queen Victoria stamp will be offered during the June 14-15 Robert A. Siegel worldwide auction in New York City.
Previous
Next

The Tuesday morning session begins at 10:30 a.m. with issues of Great Britain.

A plate composite reconstruction is offered of the Penny Black, Britain’s 1840 1-penny first issue, with 240 stamps arranged by the plate letters printed in the lower two corners, starting with “A-A” at top left, and ending with “T-L” at bottom right.

Siegel notes, “The Penny Black plate was lettered in such a way that each stamp could be easily matched to its position. This may have been done so that any defective engravings could be quickly identified.”

The plating collection is listed by Siegel with a value of $76,800, which is the $320 value for a used Penny Black in the Scott Classic Specialized Catalogue of Stamps and Covers 1840-1940, multiplied by 240. The stamps are cataloged with no premium for any of the better plates, Siegel states.

And speaking of better plates, the next item offered is a scarce used Penny Black from Plate 11, lettered “S-A,” which lists in the Scott Classic Specialized catalog for $4,500 used. The stamp is struck with a black Maltese Cross and has wide margins all around.

Also offered is a sound unused no-gum example of the 1d black “V-R” Queen Victoria Official stamp (Scott O1). Though never officially placed in use, examples are known used and on cover.

Siegel explains that examples are often found cut into the design or with faults.

This one, with full to just clear margins all around, is listed by Siegel with the Scott catalog value of $35,000 for the unused stamp.

“This stamp was accidentally released for sale when a few imprimatur sheets in Buff were perforated and mixed with normal inventory,” Siegel explains. “The actual intended stamp was the issued 6p Gray ([Scott] 62; SG [Stanley Gibbons] 146-147). It is believed around 30 examples exist of which all are used and many are plagued by a myriad of faults.”

The stamp offered in the Siegel sale is described as sound. It is lettered F-L and struck with a “447” Leeds duplex cancel. Accompanied by a 1986 Brandon certificate, the stamp is listed with its Scott catalog value of $25,000.

Canada and provinces are represented with more than 240 lots, including telephone and telegraph stamps from the Ladany collection. The last item in this group is believed to be the only known example of the undated 1¢ red-brown King Telephone Co. stamp on lined paper.

The Maulding collection of Belgian Congo, offered Wednesday morning, includes single lots of stamps, postal history and postal stationery, plus a number of smaller collections and accumulations offering errors and imperforates, postage due covers and much more.

The stamps are tied with “Helsinki Helsingfors 24.IX.30” circular datestamps on the cover flown to Stockholm, Sweden.

Siegel explains that the stamp error occurred only once in a sheet, in position 86, so just 500 examples were printed.

“Although, only 200-300 were sold before they were discovered and the remainders were returned. Scant few exist used in a pair with normal overprint and fewer still on a flown cover.”

The cover is signed Zierer and accompanied by a 1998 Gummesson certificate. It is listed by Siegel with the $16,500 Scott catalog value for the error stamp on cover.

A number of Mauritius stamps on offer includes a used example of the 1859 2d blue “large fillet head” re-engraved Queen Victoria stamp (Scott 15) with large margins all around and rich color. In all, the auction contains some 2,048 lots from around the world.