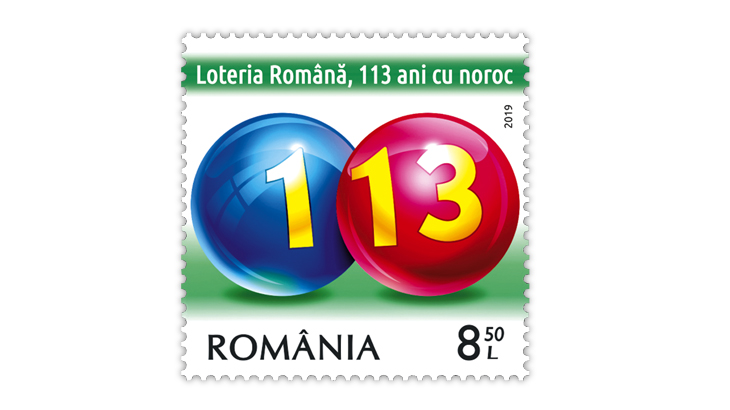 The design of Romania's 8.50-leu Friday the 13th stamp even features the numeral “13” on one of the two lottery balls pictured. The other ball shows the “1.”

Romania is pushing its luck by issuing a commemorative stamp Friday, Sept. 13, with the theme of “113 years of luck.”

In this case, the “luck” refers to the Romanian state lottery that was founded 113 years ago, in 1906.

In announcing the stamp, Romania’s philatelic bureau, Romfilatelia, said, “The story of luck has been written at the Romanian Lottery for 113 years by people, employees and players, along with every Romanian whose life has been changed thanks to the institution.”

The design of the 8.50-leu stamp even features the numeral “13” on one of the two lottery balls pictured. The other ball shows the “1.”

Those with triskaidekaphobia, fear of the number 13, may shy away from this stamp, but it does offer a hidden symbol often associated with good luck. Viewing the stamp under ultraviolet light reveals a four-leaf clover between the two lottery balls.

Part of the lottery’s emblem, this four-leaf clover is pictured in the selvage attached to the lower stamps in a pane of five and also shown on the label in that pane.

Romfilatelia reports that the stamp also is being sold in panes of 28. For more details, visit the website www.romfilatelia.ro/store.