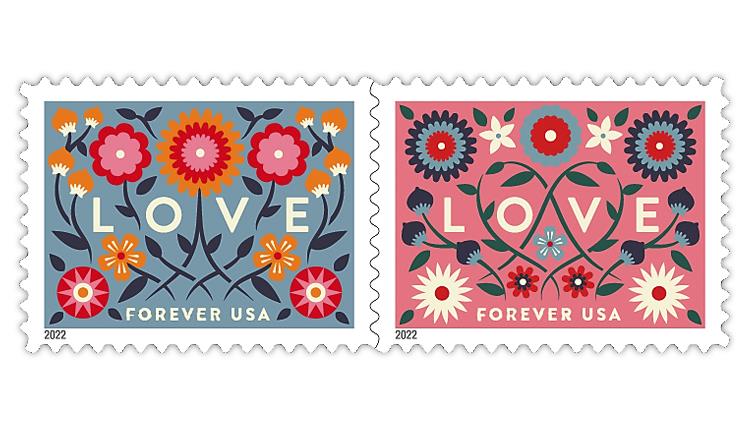 Artist Bailey Sullivan took inspiration from classic European folk art when she designed the pair of United States Love 2022 stamps to be issued Jan. 14 in Romeo, Mich. The stamps will be issued in a pane of 20. 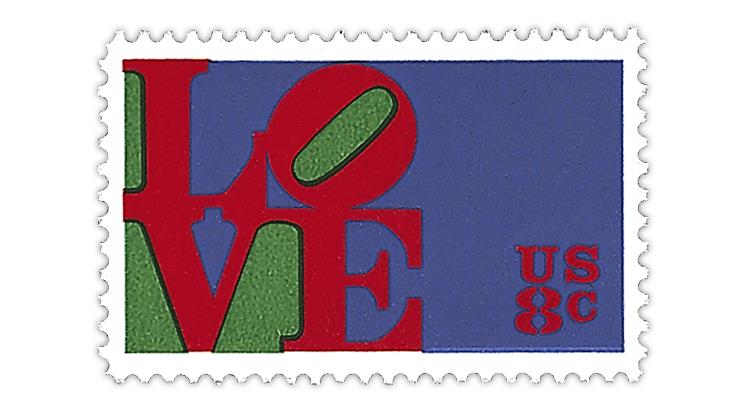 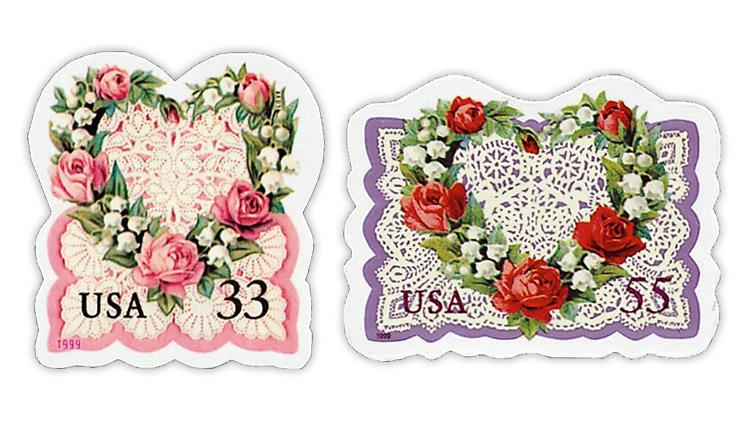 The 1999 33¢ and 55¢ Love stamps were the first U.S. stamps with cut-to-shape borders surrounding the designs. 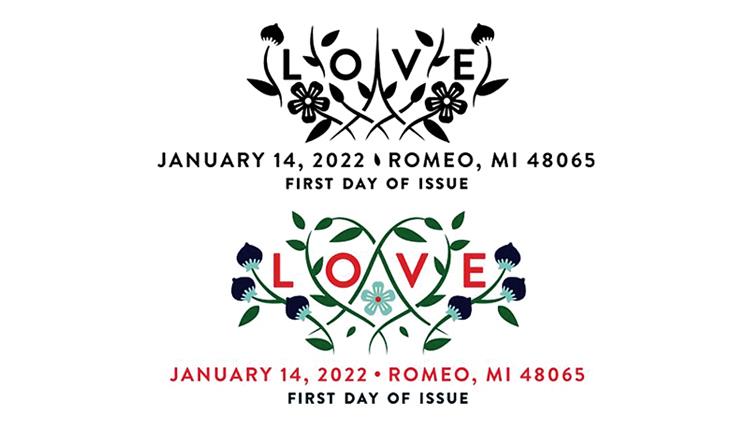 Two pictorial first-day postmarks are available for the Love 2022 forever stamps, one in black and the other in colors similar to some of those used to print the stamps.
Previous
Next

In a not-too-subtle nod to one of the star-crossed lovers in Shakespeare’s Romeo and Juliet, one of literature’s best-known tragic love stories, Romeo, Mich., will play host to the Jan. 14 first-day ceremony for the two United States nondenominated (58¢) forever Love stamps.

The event will begin Friday at 11 a.m. at the Romeo Masonic Lodge 41, 231 N. Main St., in Romeo. Pritha Mehra, chief information officer and executive vice president of the U.S. Postal Service, will serve as the dedicating official.

Although the ceremony is free and open to the public, the Postal Service recommends that those interested in attending respond online via the USPS website.

In an announcement published in the Dec. 2, 2021, Postal Bulletin, the U.S. Postal Service names the pair of new stamps Love 2022.

Both stamps showcase Bailey Sullivan’s “graphic illustrations of flowers inspired by old European folk art,” according to the Postal Service.

Symmetrical arrangements of leaves and flowers surround the word “LOVE” on each stamp, with decorative vines growing between each of the letters, which are shown in dropout white.

The left stamp of the pair, as shown here, has a powder blue background. The stamp on the right has a coral background. The vines form a valentine heart shape around the letters “OV” on the coral Love stamp.

Overall the soft color palette and design symmetry of the stamps create a pleasing effect that encourages the viewer to notice the details on each issue.

Sullivan designed the Love 2022 stamps, and Greg Breeding served as art director. Sullivan also created the digital illustration for the nondenominated (55¢) Love stamp issued Jan. 14, 2021, exactly one year before the release of the new Love stamps.

The first U.S. Love stamp was issued in 1973. This 8¢ stamp (Scott 1475) reproduced a well-known pop art design by Robert Indiana in bold shades of red, blue and green. Indiana’s design stacked the uppercase letters L and a tilted O above the letters V and E into a compact space on the left side of the stamp.

According to My Modern Met, Indiana created his first Love sculpture in 1970, but “the origins of its design can be traced back to six years earlier, when the Museum of Modern Art in New York City commissioned Indiana to create a Christmas card.”

“The bold red letters stand out against a backdrop that alternates between bright blue and green. When paired with the curiously crooked O, this color palette appears to imply playfulness, making the print accessible to a wide audience — and, subsequently, a perfect prototype for a work of public art.”

It wasn’t until 1982 that the next U.S. Love stamp was issued, a 20¢ stamp (Scott 1951) spelling out the word “LOVE” with delicate flowers and vines, some of which are vaguely similar to those on the Love 2022 stamps.

In 1999, the Postal Service broke new ground with the Love series when it issued 33¢ and 55¢ self-adhesive stamps (Scott 3274-3275) featuring cut-to-shape borders around the designs. Each stamp pictures lace paper on which is superimposed a heart-shaped wreath of roses, lilies of the valley and green leaves.

Over the years, Love stamps have displayed a variety of graphic elements from lacy Valentines to computer-designed hearts and whimsical floral themes. Most of the Love stamps have been issued in January or early February to provide mailers with the option of using the new stamp when sending Valentine’s Day greetings.

The Love 2022 stamps “are also perfect any time to add floral flair to letters, birthday or graduation cards, baby shower invitations, thank-you notes — the uses are limitless,” the USPS said.

Two pictorial first-day cancels for the new Love stamps have been revealed by the Postal Service, one in black and the other in colors similar to some of those used to print the stamps.

The black postmark illustrates intertwined vines growing between the letters in “LOVE.”

The color postmark closely resembles the central vines and “LOVE” elements on the Love stamp with the coral background.