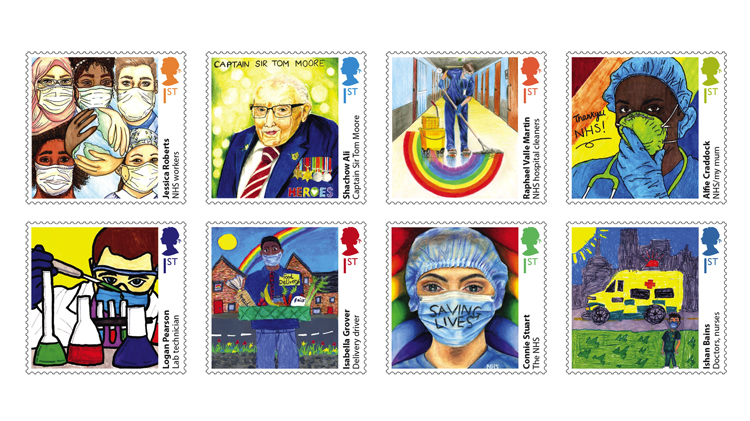 Royal Mail honors frontline workers, scientists and others in a March 23 Heroes of the COVID Pandemic set of eight stamps.

The stamp designs feature the winning entries in a nationwide design contest for school-age children.

Eight different designs appear on eight stamps valued at the first-class rate (85 pence on the date of issue). The artist’s name and the design title are inscribed in the border of each stamp.

On April 3, 2021, Prime Minister Boris Johnson and Royal Mail announced a contest for children ages 4 through 14 to submit designs that would honor those whom Johnson called “Covid Heroes.”

“From our family members, teachers, doctors and nurses to our vaccine scientists and fundraisers, we want to recognise and remember them,” Johnson said.

Royal Mail received 606,049 entries from 7,479 schools in the competition, breaking the Guinness world record for the largest postage stamp-design competition.

The only other use of children’s art on Great Britain’s stamps up to now has been on the 1992 Protect the Environment set (Scott 1463-1466).

In the three months following the May 28, 2021, deadline for entries for the Heroes of the COVID Pandemic contest, a network of judges consisting of current and retired art teachers evaluated the hundreds of thousands of entries. They then chose 120 regional finalists.

At that time, Royal Mail CEO Simon Thompson said: “We would like to thank all of the 606,049 children who submitted such brilliant designs to the competition. We have been amazed and impressed by the sheer volume of entries. And to have achieved a Guinness World Records title in the process shows how much the UK’s children value those heroes who have kept the nation moving during such a difficult period. To the 120 regional finalists - Well Done! We are really looking forward to seeing the winning eight designs!”

Moore (1920-2021) was the World War II veteran who at age 99 raised more than £32 million for charity by taking laps in his garden during the COVID-19 lockdown. He also was honored one of the winning designs in the contest.

Royal Mail Group designed the stamps. International Security Printers printed them by lithography in sheets of 48, also available in panes of 24.

Related products from Royal Mail include first-day covers and a set of eight postcards showing enlarged images of the stamps. There are two postmarks for the stamps, and each winner also will have a special dedicated postmark.

Royal Mail offers a presentation pack containing all eight stamps. The pack includes the details behind the competition along with a celebration of the 24 regional winning designs.

The stamps and related items can be ordered from Royal Mail. In addition to the website, ordering information is available from Royal Mail, Tallents House, 21 S. Gyle Crescent, Edinburgh, EH12 9PB, Scotland.

British contest to honor heroes of the COVID-19 pandemic