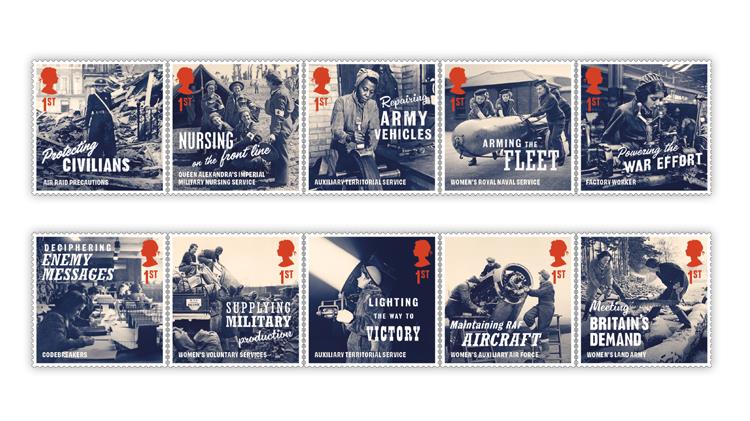 The Unsung Heroes: Women of WWII set of 10 stamps issued May 5 by Royal Mail features photographs of women performing roles that were vital to Great Britain’s war effort. 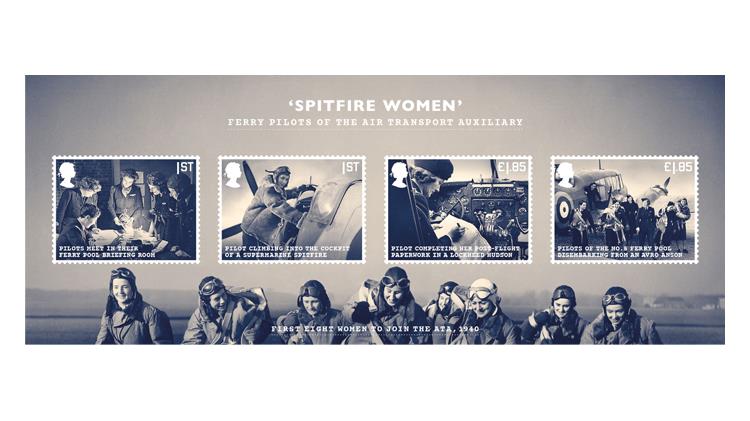 Royal Mail also issued a souvenir sheet of four stamps in the Unsung Heroes: Women of WWII set. The sheet honors the members of the civilian Air Transport Auxiliary, called Spitfire women, who delivered planes to airfields around the country.
Previous
Next

Royal Mail recognizes the vital contributions women made to Great Britain during World War II in a May 5 issue of 14 stamps.

“World War II changed the lives of women everywhere,” Royal Mail said. “Women were subject to conscription in Britain, working in industry, agriculture and the women’s auxiliary services as well as in medicine, transport and the secret services.”

Two of the stamps in the set of 10 show photographs of women working as part of the Auxiliary Territorial Service, which is made clear by small text at the bottom of the designs. Each stamp has larger text relating to the action being performed. For these two stamps, the actions are described as “Repairing Army Vehicles” and “Lighting The Way To Victory.”

The Women’s Auxiliary Air Force separated from the Auxiliary Territorial Service in 1939, according to the Royal Air Force Museum, and in the next six years, a quarter million women served in its ranks.

Britain began female conscription in 1941, and the majority of women worked in wartime employment by the middle of 1943, according to Royal Mail. Wartime employment included factory work, as shown on the stamp inscribed “Powering the War Effort.”

Factory work is one method of meeting demand for goods during wartime, and a stamp with members of the Women’s Land Army working a saw across snow-covered logs also shows how women worked to meet demand during the war.

The Women’s Land Army was established in WWI and was reintroduced in WWII to provide agricultural labor. A section of the Land Army, called the Timber Corps, employed 6,000 women in chopping down trees and running sawmills, according to the BBC.

Other stamps in the set show how women played important roles more directly related to Britain’s safety. One stamp shows a woman standing amid a large pile of rubble. Text on the stamp explains that this is related to protecting civilians as a part of air-raid precautions.