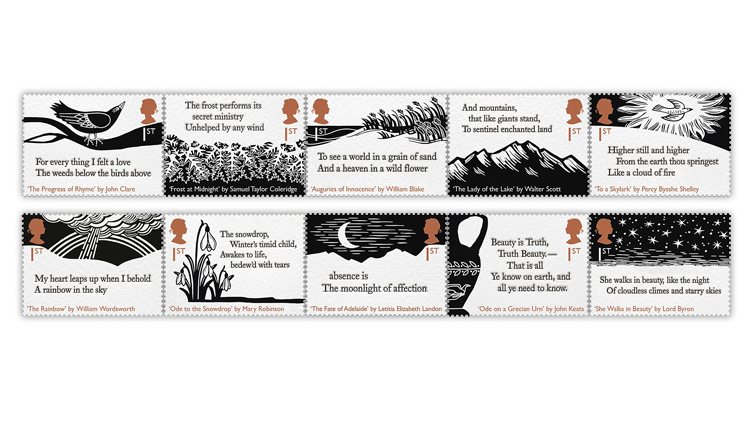 Considered one of the founders of the Romantic era of British poetry, Wordsworth was born April 7, 1850, in Cockermouth, Cumbria, England.

The stamps are nondenominated, paying the first-class rate (currently 76 pence).

Each design displays lines of poetry and a related linocut illustration by artist and printmaker Linda Farquharson. On her website, Farquharson describes this printmaking process: “A linocut is made using a sheet of linoleum the surface of which is cut away so that the image to be inked and printed onto paper stands in ‘relief’. …”

Her illustrations highlight nature, as that is a prevalent theme in the poetry of the Romantic era.

The Poetry Foundation defines Romanticism as “a poetic movement of the late 18th and early 19th centuries that turned toward nature and the interior world of feeling, in opposition to the mannered formalism and disciplined scientific inquiry of the Enlightenment era that preceded it.”

The stamps are se-tenant (side-by-side) in two horizontal strips of five.

The first se-tenant strip begins with a stamp showing a bird to represent the lines “For every thing I felt like a love/ The weeds below the birds above” from The Progress of Rhyme by John Clare (1793-1864).

The next design depicts frost for Frost at Midnight by Samuel Taylor Coleridge (1772-1834).

Auguries of Innocence by William Blake (1757-1827) begins, “To see a world in a grain of sand/And a heaven in a wild flower.” The illustration shows wildflowers on a beach.

On the fourth stamp in this se-tenant strip, mountains represent the lines “And mountains, that like giants stand/To sentinel enchanted land” from The Lady of the Lake by Walter Scott (1771-1832).

The last stamp in the strip shows the title bird of To a Skylark by Percy Byshe Shelley (1792-1822).

The second strip begins with Wordsworth’s The Rainbow, also known as My Heart Leaps Up. In addition to a rainbow, the illustration includes clouds and rain.

Snowdrops (Galanthus nivalis) are shown on the second stamp in the strip for Ode to the Snowdrop by Mary Robinson (1757-1800).

In The Fate of Adelaide, Letitia Elizabeth Landon (1802-38) wrote “absence is/The moonlight of affection.” The stamp inscribed with these lines depicts a crescent moon.

Beauty is the focus of the lines on the last two stamps in this se-tenant strip.

John Keats (1795-1821) ends his Ode on a Grecian Urn with “Beauty is Truth, Truth Beauty. — That is all/Ye know on earth, and all ye need to know,” while Lord Byron (George Gordon Noel Byron, 1788-1824) begins She Walks in Beauty with “She walks in beauty, like the night/Of cloudless climes and starry skies.”

The Keats stamp shows a Grecian urn, and a starry night is illustrated on the Lord Byron stamp.

Philip Parker of Royal Mail said of this new issue, “The Romantic poets composed some of the most loved poetry of all time, and our striking new stamps celebrate the genius of their imaginations.”

The Manchester, England, design group The Chase designed the stamps. Each stamp measures 41 millimeters by 30mm and is perforated gauge 14.5 by 14.