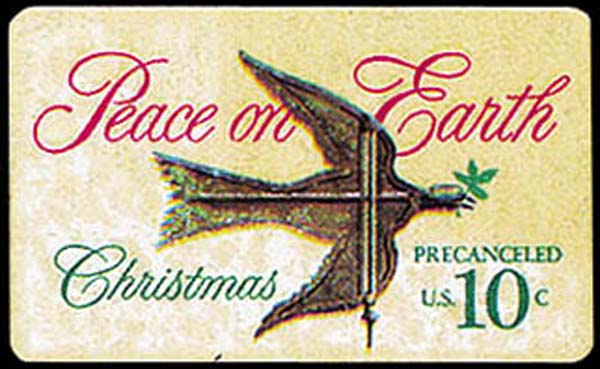 It's a day that many stamp collectors have dreaded.

The United States Postal Service has a plan to discontinue printing any U.S. perforated stamps made with lick-and-stick adhesive, and to manufacture all future stamps as self-adhesives.

A key component of the presentation states, "USPS recommends completing the implementation of PSA stamps for all stamp releases."

The plan suggests ending all production of stamps with moisture-activated adhesive, and printing all new stamps "and reprints" as self-adhesive stamps.

The Postal Service's existing inventory of perforated lick-and-stick stamps would remain on sale until inventory is depleted, according to the presentation.

Most U.S. stamps issued since 2002 have been self-adhesive, according to the Postal Service, but some lower-denomination stamps are still offered in perforated coils with moisture-activated adhesive.

The road to this day has been a long one.

The first U.S. self-adhesive stamp was the 10¢ Dove Weather Vane Christmas issue of 1974 (Scott 1552), but those experimental stamps were expensive to create and the adhesive didn't perform as planned.

Fifteen years would pass before the Postal Service tried again, with a 25¢ Eagle and Shield self-adhesive stamp (Scott 2431) sold in panes and strips of 18 for $5, a 50¢ premium over face value.

The problem, according to the USPS, is that "water activated paper is only available through international channels," adding to the production cost and slowing down production as stamp printers wait for the special imported paper to arrive.

Mailers today are accustomed to self-adhesive stamps, but collector reaction has ranged from begrudging acceptance to outright rejection.

Collectors were further dismayed by a change in USPS policy that abandoned the requirement imposed on stamp manufacturers that the stamps be soakable; that is, that a used stamp can be soaked free of envelope paper in water without damaging the stamp. The method of saving used stamps by soaking them in water to remove them from envelope paper had been practiced by collectors for more than 150 years.

The change, which eliminated a water-soluble layer between the stamp paper and the adhesive, began affecting stamps issued in 2006.

Most U.S. self-adhesive stamps printed today will be damaged if soaked in water.