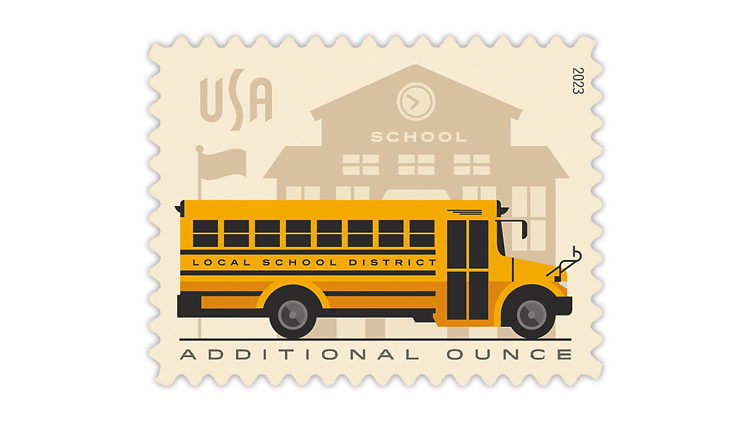 On Jan. 5, the United States Postal Service will issue a School Bus stamp to fulfill the postage rate for an additional ounce of first-class domestic letter mail.

A new United States stamp will be issued Jan. 5 to fulfill the postage rate for an additional ounce of first-class domestic letter mail.

The U.S. Postal Service said this stamp “celebrates the iconic yellow school bus and its role in ensuring that millions of children get to school and home again every day.”

The nondenominated (24¢) School Bus stamp will be sold in a coil of 100 and a pane of 20, resulting in two distinct varieties. Both versions are printed by Banknote Corporation of America, a U.S. Postal Service contractor.

Additional-ounce stamps are most commonly used when a letter that normally would be mailed at the first-tier domestic rate of 60¢ has just enough additional weight to take it beyond 1 ounce, requiring extra postage.

The USPS said that while the stamp shows a modern school bus, the school “is more evocative of an earlier era.” The school building has a clock underneath the front gable and two wings on either side of the main structure.

The easily recognizable yellow coloring of the school bus makes the image all the more striking against the neutral tones in the rest of the stamp.