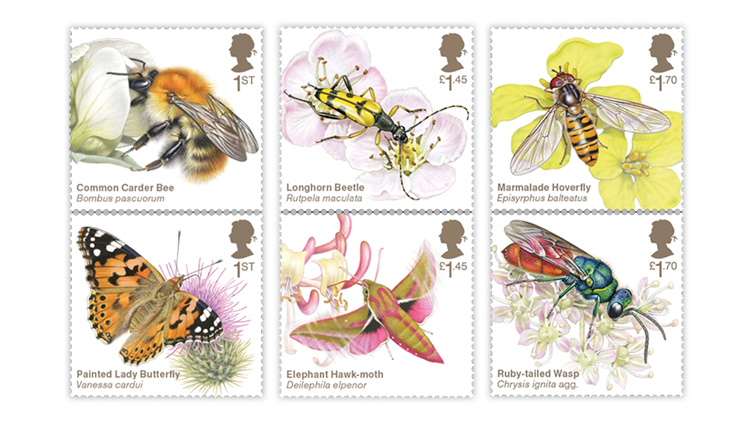 In announcing the stamps, Royal Mail said: “Pollinators are responsible for pollination of vast quantities of food crops for humans and farm animals and the pollination of wild plants including flowers and some trees. Of all plants worldwide, more than 85% are pollinated by insects and other animals.”

Royal Mail worked with ecologist, entomologist and president of the Royal Entomological Society Helen Roy on this Brilliant Bugs issue.

Wildlife artist Richard Lewington illustrated the stamps, and each illustration shows an insect pollinator and a flower.

Royal Mail spokesman Philip Parker said: “Our exquisite new stamps depict colourful insects feeding on some of the flowers they frequent. We mark the vital role they play in pollinating wild flowers and crops: from bees and butterflies to the often-underappreciated work of hoverflies, moths, wasps and beetles.”

The stamps are in three se-tenant (side-by-side) pairs: two stamps for the domestic first-class letter rate (currently 76 pence), two £1.45 stamps paying the rate for mail to Europe weighing up to 20 grams and the worldwide rate for letters up to 10 grams, and two £1.70 stamps for international letters up to 20 grams and mail to Europe up to 100 grams.

The United Kingdom has more than 250 species of bees and 24 species of bumblebees. A first-class stamp shows one of those bumblebees, the common carder bee (Bombus pascuorum) on a large blue pea flower.

Wildlife Trusts, the federation of wildlife charities in the United Kingdom, describes it as a “fluffy, gingery bumble bee that can often be found in gardens and woods, and on farmland and heaths.”

The other first-class stamp features a painted lady butterfly (Vanessa cardui) on thistle.

The website of the Lepidopterists’ Society, an international nonprofit organization that promotes the study and appreciation of butterflies and moths, mentions two of this migratory butterfly’s nicknames: “Perhaps the most widespread butterfly in the world is the Painted Lady or Thistle Butterfly (Vanessa cardui), which occurs throughout much of the world (except parts of South America). This species is also called The Cosmopolitan, because it is practically cosmopolitan (found everywhere)!”

Royal Mail said, “This species lives for several years in its larval stage feeding on decaying wood, finally emerging as the striking, wasp-mimicking adult illustrated on the stamp to live for between two and four weeks.”

The second stamp in the £1.45 pair shows an elephant hawk moth (Deilephila elpenor) feeding on honeysuckle.

While the elephant hawk moth is pink and green, as a caterpillar it is said to resemble an elephant’s trunk.

As the name suggests, hoverflies are known for hovering in midair. The United Kingdom has more than 280 species of these flies that can resemble small bees or wasps.

The Wildlife Trusts’ website describes the ruby-tailed wasp as one of the United Kingdom’s most beautiful insects but also mentions that it is a little lazy: “ … the females actually lay their eggs in the nests of other solitary bees and wasps, especially Mason Bees. When the eggs hatch, they eat the larvae of the Mason Bees and develop — this gives the Ruby-tailed wasp its other name of ‘Cuckoo Wasp.’ ”

International Security Printers printed the stamps by lithography. Each stamp measures 36.5 millimeters by 34.7mm and is perforated gauge 14 by 14.5.

Other products offered by Royal Mail in conjunction with the Brilliant Bugs issue include first-day covers, a presentation pack, and six postcards reproducing the designs of the stamps. The presentation pack includes the six stamps and information from Helen Roy on pollination, the decline in pollinating insects and how we can conserve them.