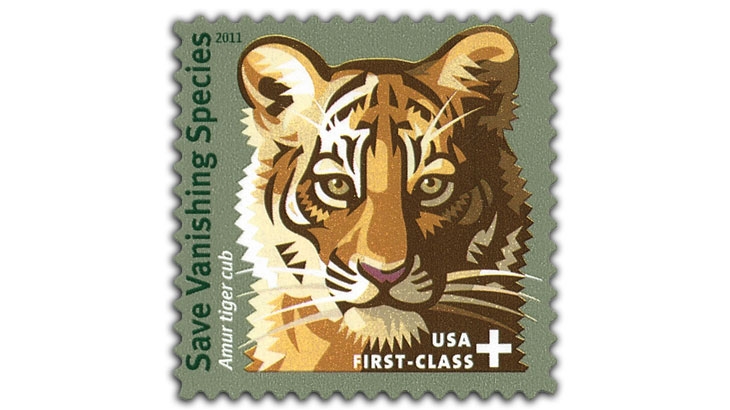 The 2011 Save Vanishing Species semipostal stamp was withdrawn from sale at the end of 2018. Recent legislation resulted in the stamp being returned to sale on Jan. 16. 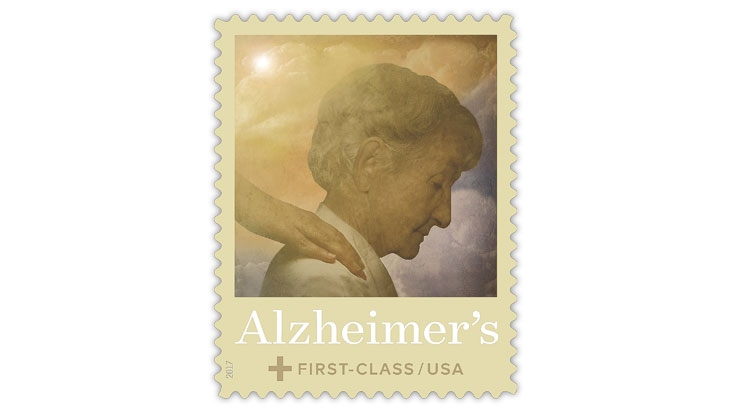 The 2011 United States Save Vanishing Species semipostal, which was taken off sale more than a year ago, has returned to the nation’s post offices.

The Breast Cancer Research semipostal, which was destined to be taken off sale at the end of 2019, will instead remain on sale for another eight years.

And the 2017 Alzheimer’s semipostal taken off sale at the end of November 2019 might have new life as well.

The nondenominated Save Vanishing Species semipostal stamp (Scott B4) was withdrawn from postal sale Dec. 31, 2018, but post offices were instructed to hold onto stocks of the stamp, which raises funds for wildlife conservation.

When it went off sale, the semipostal was being sold for 65¢, with 50¢ designated for postage plus a 15¢ surtax collected for conservation efforts.

Bills to return the stamp to sale were sponsored in Congress by Rep. William Clay, D-Mo., and by Sen. Rob Portman, R-Ohio. Portman’s office reported Dec. 19, 2019, that wording to return the stamp to sale was included in the final fiscal year 2020 federal spending package. That spending bill was approved by President Donald Trump in late December.

“According to the Fish and Wildlife Service, since the first of these stamps went on sale in 2011, more than 50 million have been sold, raising more than $5.7 million,” Portman’s announcement said.

The Postal Bulletin published Jan. 16 by the U.S. Postal Service confirmed that the stamp is being returned to sale effective immediately.

By Thursday afternoon, the Save Vanishing Species semipostal was listed as available for purchase on the USPS online Postal Store.

Language was included in the National Defense Authorization Act of 2020 (S.1790) to extend sales of the Breast Cancer Research semipostal for another eight years, through 2027. That Act was signed into law by President Trump on Dec. 20, 2019, before the sales period for the stamp expired.

The Breast Cancer Research semipostal stamp was originally issued in a slightly different form on July 29, 1998 (Scott B1) as the first semipostal in U.S. history.

According to the Postal Service, semipostal sales through November 2019 have raised more than $90.7 million for breast cancer research, with more than 1.06 billion stamps sold since the first issue.

The funds raised from the sales of this stamp are divided between the National Institutes of Health (70 percent) and the medical research program at the Department of Defense (30 percent).

The fate of the nondenominated (55¢+10¢) Alzheimer’s semipostal stamp (Scott B6) is still uncertain.

The stamp was originally issued Nov. 30, 2017, to remain on sale for a period of two years. It was the first stamp offered in the USPS discretionary semipostal program.

The Postal Service planned to issue five semipostal fundraising stamps over a 10-year period under its discretionary program, with each stamp to be sold for no more than two years. The second stamp offered in this program is the nondenominated (55¢+10¢) Healing PTSD semipostal (Scott B7) issued Dec. 2, 2019.

The Alzheimer’s semipostal was withdrawn from sale at U.S. post office counters when the two-year sales period ended in November 2019.

At that time, sales of the stamp had raised more than $1 million for the U.S. Department of Health and Human Services in its efforts to treat the disease.

As the stamps were being pulled from sale nationwide, the Postal Service instructed its post offices to hold on to existing stocks of the stamp after receiving a letter from members of Congress advising that legislation was being developed to override the two-year limit for this stamp and to instruct the Postal Service to continue selling it.

According to recent news releases from the offices of Sen. Shelley Moore Capito, R-W.Va., and other legislators, language in the final spending package for fiscal year 2020 “directs the United States Postal Service (USPS) to continue selling the Alzheimer’s semipostal fundraising stamp,” reportedly for a period of six years.

The Jan. 16 Postal Bulletin did not address the status of the Alzheimer’s semipostal.