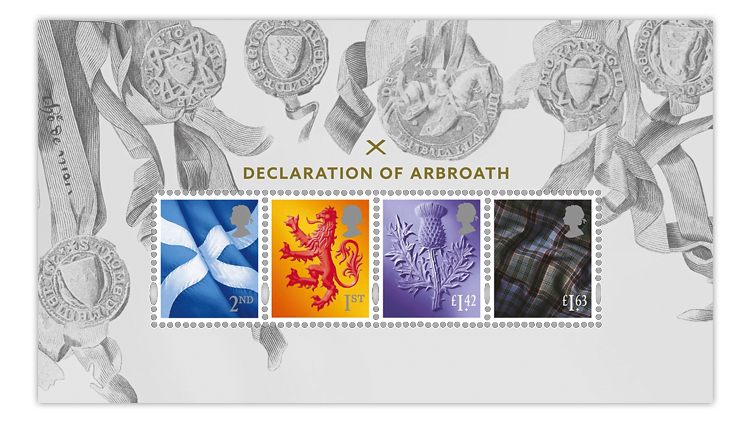 Great Britain’s Royal Mail will commemorate the 700th anniversary of the signing of the Declaration of Arbroath on a souvenir sheet to be issued April 6.

The National Records of Scotland calls this declaration one of Scotland’s most important historical artifacts and described it as “a letter written in 1320 by the barons and whole community of the kingdom of Scotland to the pope, asking him to recognise Scotland’s independence and acknowledge Robert the Bruce as the country’s lawful king.”

Fifty years ago, in 1970, Royal Mail commemorated the 650th anniversary of the declaration on a 5-penny stamp (Scott 612).

As of March 23, the second-class rate is 65p and the first-class rate is 76p. The other two stamps pay new European and international rates.

Also known as regional stamps, country definitives are issued for England, Northern Ireland, Scotland and Wales. They are valid throughout the United Kingdom.

Royal Mail describes the selvage of the souvenir sheet as depicting a facsimile engraving of the declaration, circa 1815. The engraving is attributed to William Home Lizars (1788-1858) and Daniel Lizars (1793-1875).

The part of the engraving shown on the sheet depicts seals that were attached to the document.

On its website, the National Records of Scotland (www.nrscotland.gov.uk) explained how the document received its name and the significance of the seals: “The Declaration was probably drawn up by Bernard, Abbot of Arbroath. It was authenticated by seals, as documents at that time were not signed. Only 19 seals now remain of what might have been 50 originally, and many are in poor condition.”

Tayburn, a design agency in Scotland, designed the souvenir sheet. International Security Printers printed it by lithography. The souvenir sheet measures 123 millimeters by 70mm. Each stamp is 20mm by 24mm and perforated gauge 15 by 14.