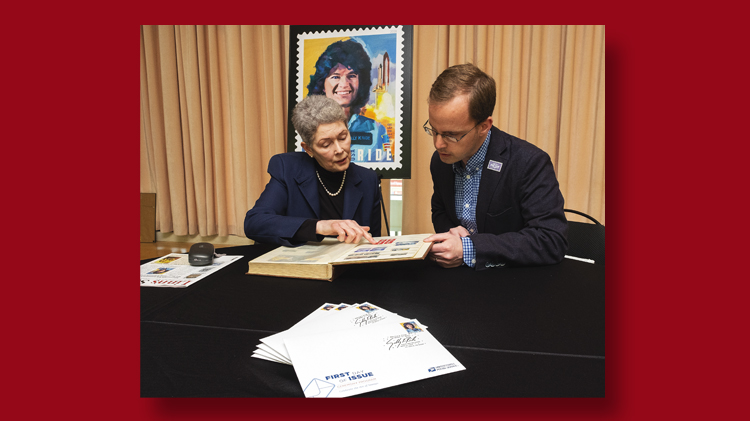 Celebrities that collect or have collected stamps are somewhat few and far between.

It seems like now would be the right time to make some additional space in the gallery for an image of astronaut and first American woman in space Sally Ride.

On May 23, the U.S. Postal Service issued a commemorative forever stamp honoring Sally Ride. A story about the ceremony is here.

I traveled to La Jolla in southern California for the event and was treated to an exclusive interview with Sally Ride’s widow, Tam O’Shaughnessy. She brought along one of seven stock books of stamps and philatelic items that Ride had collected.

That story appears in the June issue of Linn's Stamp News monthly edition.

Ride, in addition to all of her amazing accomplishments, was also a stamp collector. What was great to learn, that like many of us, she began collecting stamps at an early age. But then she also continued collecting without any major pause. Stamps had a prominent place in her home and served as an occasional conversation piece, according to O’Shaughnessy.

Space and Olympics were Ride’s main topics to collect. The monetary value of the stamps wasn’t what attracted her to the hobby, instead she valued the historical significance of those commemorated and also how the subjects related to her life and interests.

I only looked through one of the seven stock books, so there’s the possibility of much more that I didn’t see. I hope Linn’s readers enjoy this quick look at part of Ride’s collection, and I would like to thank O’Shaughnessy and the U.S. Postal Service for their assistance in arranging the interview.