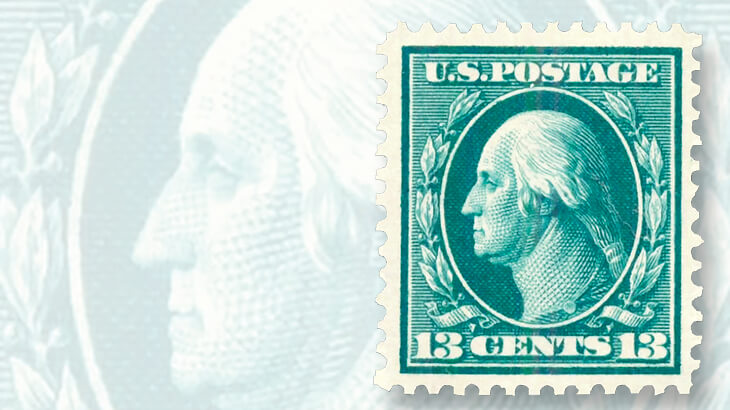 The 1909 United States 13¢ George Washington stamp (Scott 339) is a good buy in mint never-hinged condition in the $60-to-$75 price range against the 2016 Scott Specialized Catalogue of United States Stamps and Covers value of $90.

Before the 1908-1909 Washington-Franklin series, U.S. definitive (regular-issue) stamps had featured a variety of famous Americans as the subjects of stamps of different denominations.

The 1908-09 series whittled the list of subjects down to two: postmaster general, statesman, and Founding Father Benjamin Franklin; and commander of the Continental Army and first president of the United States George Washington.

The first group of stamps in the series (Scott 331-342) was perforated gauge 12 on paper double-line “USPS” watermark. The engraved 1¢ to 15¢ stamps were printed using  plates of 400 subjects that were divided into panes of 100 for sale.

The high-denomination 50¢ and $1 stamps were printed using plates of 200 subjects, also divided into panes of 100 for sale. This classic series has been a mainstay of U.S. collecting since the stamps were first issued.

The 2016 Scott Specialized Catalogue of United States Stamps and Covers values the stamp in the grade of very fine at $90. It is a good buy in the $60-to-$75 price range. Beware of examples that have been regummed or reperforated. Expertization is a good idea.