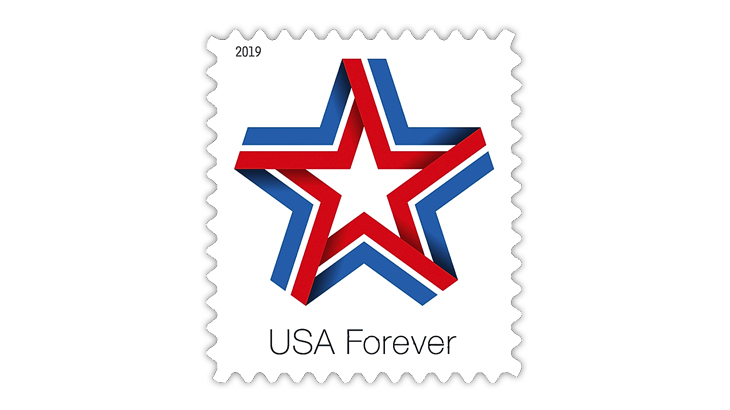 A nondenominated (55¢) Star Ribbon definitive forever stamp will be issued March 22 in coil rolls and in a pane of 20.

Patriotic symbols were used as design elements on United States postage stamps as far back as 1869, when the 10¢ yellow stamp issued that year showed an eagle with spreading wings perched upon a striped shield (Scott 116).

On March 22, a new nondenominated (55¢) Star Ribbon forever stamp will be issued in Oakbrook Terrace, Ill., a western suburb of Chicago. The digitally created stamp design shows a red, white and blue ribbon crisply folded into a star shape. The white space remaining in the center also creates a star, amplifying the patriotic effect.

“The tricolored ribbon, folded into a patriotic symbol, is intended to evoke the connectedness of the American people,” according to the U.S. Postal Service.

Technical details for the coils have not been released, but if the same printer created both coil sizes, it is likely the coil stamps will be the same regardless of the source. If so, two major varieties should result from this issue: one pane stamp and one coil variety.

The stamps in panes of 20 were offset-printed by Banknote Corporation of America and will include microprinting, according to USPS technical details.

Asked why the stamp was being issued in a pane of 20 — an unusual format for a forever definitive stamp — USPS spokesman Roy Betts told Linn’s Stamp News, “There was a primary need for patriotic large coils, but because we wanted the general buying public to also have access to these stamps we decided to offer it in panes of 20 as well.”

The stamp pane can be split to allow single sales, Betts added.

The stamp is being issued on the opening day of the American Stamp Dealers Association’s Midwest Postage Stamp Show, which is taking place March 22-24 at the Holiday Inn Chicago Oakbrook, 17 W. 350 22nd St., in Oakbrook Terrace.

A first-day ceremony is scheduled Friday at 11 a.m. Central Time at the ASDA show. The dedicating official is Michael Elston, acting secretary of the USPS board of governors. The ceremony is free and open to the public, with preregistration at www.usps.com/starribbon.

Along with various stamps featuring the American flag in many different styles, star-shaped designs in red, white and blue have been featured on multiple U.S. postage stamps and postal stationery items over the years.

On the same day, a 37¢ stamped envelope was issued with an imprinted stamp combining tricolored fluttering ribbons with a white star center (Scott U649).

A 46¢ Patriotic Star coil stamp was issued March 19, 2013, with tight stripes of blue and red interconnecting to again create a white star in the center (Scott 4749).

A pictorial first-day cancel in black has been prepared for the new stamp. A star design on the postmark complements the stamp design.