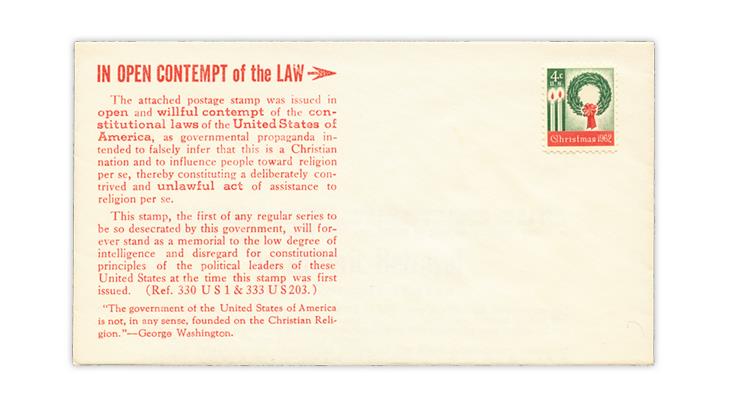 Figure 1. This cacheted, unmailed cover tries to make the case that the United States’ first Christmas stamp in 1962 was “in open contempt of the law.” Such protests failed, and Christmas stamps would become a popular and much-anticipated part of the U.S. 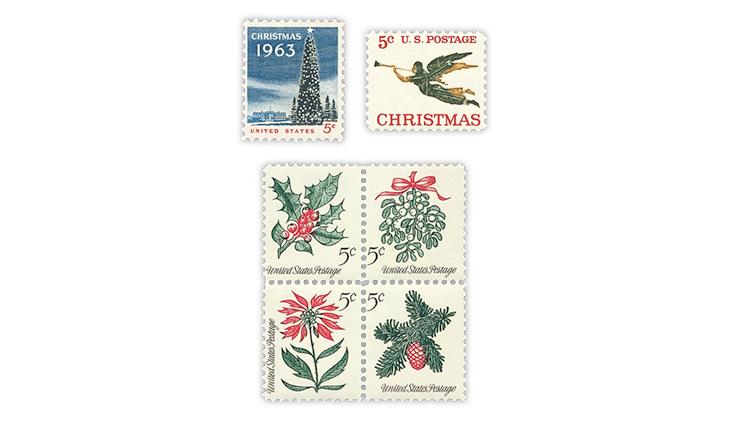 Figure 2. The U.S. Christmas issues for 1963, 1964 and 1965 featured the national Christmas tree, holiday flora and an angel with trumpet weather vane, respectively. 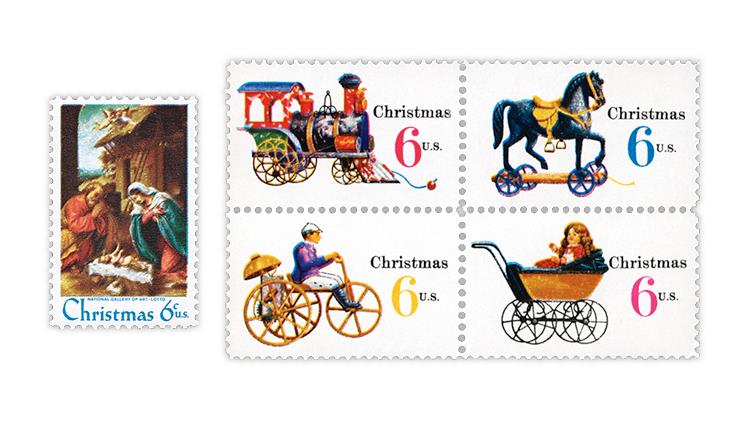 Why did it take so long for the United States to issue its first Christmas stamp? One reason was the expected blowback from people who contended that doing so would be a violation of the separation of church and state doctrine.

Sure enough, when in response to mounting pressure from the public the Post Office Department overcame its fears and issued a 5¢ Christmas stamp on Nov. 1, 1962 (Scott 1205), the naysayers expressed their opinions despite the fact that the stamp design was not overtly religious. An example is the printed message on the cover in Figure 1.

The message on the cover is headed in large red letters: IN OPEN CONTEMPT of the LAW. A red arrow points to the 5¢ Wreath and Candles Christmas stamp, which is affixed to the cover but is not canceled.

Now that the camel’s nose was in the tent, so to speak, court challenges were declined and the incredible demand for Christmas stamps was manifest, the Post Office Department continued to issue Christmas stamps. Figure 2 shows the next three Christmas issues, all 5¢ stamps. The designs were conservative, showing the national Christmas tree and the White House on the 1963 stamp (1240); holly, mistletoe, poinsettia and a sprig of conifer on the 1964 block of four (1254-1257); and an angel with trumpet weather vane in 1965 (1276).

In 1970 the Post Office Department saw the wisdom (and the potential profits) of issuing two distinct designs for each year, one with a religious theme and one with a nonreligious theme, often referred to as traditional and contemporary, respectively.

Beginning in 1991, each new Christmas saw multiple stamp designs released for the contemporary theme and an increase in formats to include sheet stamps, booklets and coils of various sizes, and in 2018, a souvenir sheet.

At least of late, when the Postal Service had a lot of leftover traditional stamps from a previous year, those have been sold instead of creating and issuing a new stamp.

The bottom line is that Christmas stamps have become a big part of the stamp program, and collectors are willing to pay the price as the stamps are generally attractive and meaningful. I can think of only a few designs that were so awful I refused to buy them.

The challenge in the future will be to continue to come up with designs that are creative, colorful and celebratory without being gaudy.

I would add that it is also important to avoid repetitive designs — with one exception. Some years ago the Postal Service announced that it intended to go in a different direction instead of depictions of the Madonna and Child for its traditional stamps.

The public reaction was loud and clear, and the White House suggested to the Postal Service that this decision needed to be reversed. So the question is how long can the Postal Service find quality classic art to use for this theme?