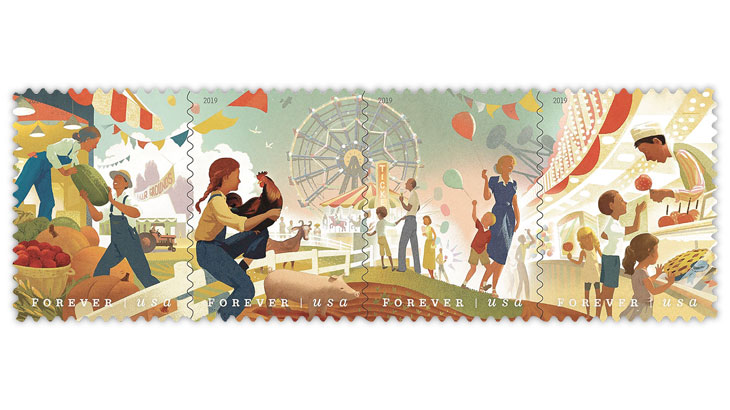 Four se-tenant stamps showing a panoramic view of a fair will be issued July 25 in Minot, N.D. The United States State and County Fairs commemorative forever stamps depict the agricultural elements of these fairs as well as the fun social aspects of the a 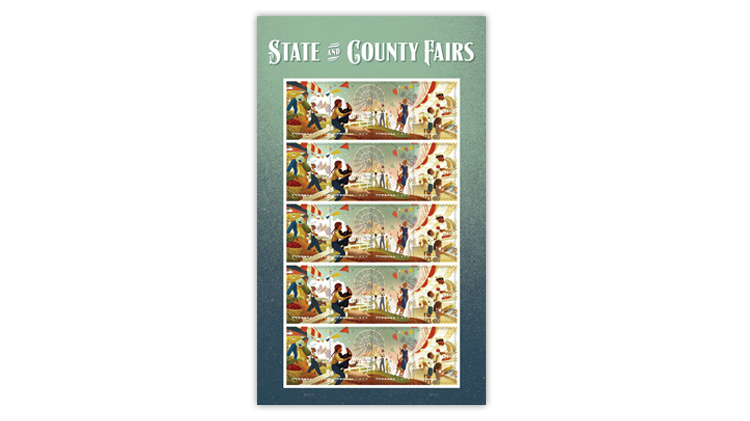 The State and County Fairs stamps will be issued in a pane of 20 that includes a decorative banner at the top and five sets of the four-stamp scene. 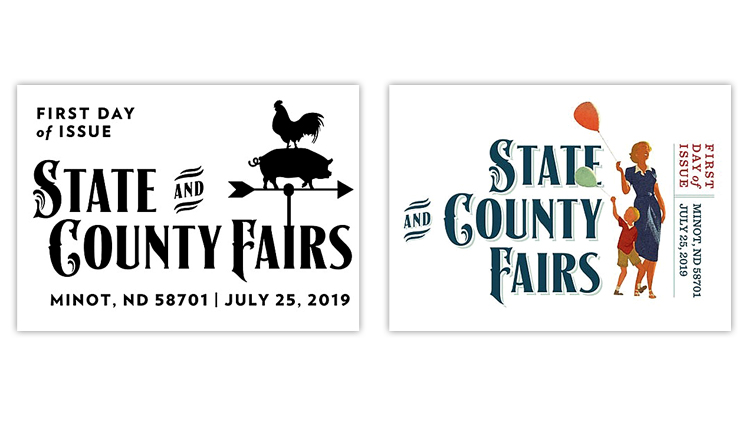 Elements of the stamp artwork are repurposed in the two first-day cancels created for use with the State and County Fairs forever stamps.
Previous
Next

The nondenominated (55¢) stamps will be issued in a pane of 20 with a decorative banner reading “State and County Fairs.”

The stamp designs together create a quadripartition, a single panoramic scene divided into four individual stamps.

The State and County Fairs commemorative forever stamps will be issued with an 11 a.m. (Central Time) first-day ceremony at Stage 2 at the North Dakota State Fair, 2005 Burdick Expressway East, in Minot, N.D.

General admission to the North Dakota State Fair is $10, according to the Postal Service. A limited number of passes to the fair are being made available with online advance registration.

The passes will be distributed on a first-come first-served basis.

“The whimsical artwork of the stamps is meant to evoke a nostalgic feeling for America’s fairs past and present,” according to the Postal Service. “The stamps show a traditional fair theme where communities gather to socialize and have fun.”

Technical details published in the USPS Postal Bulletin identify the new issue as part of the Americana series.

U.S. stamp collectors recall the Americana series as a definitive stamp series comprising some 25 different designs issued between 1975 and 1981.

Additional information about the USPS Americana series designation for the new State and County Fairs stamps was not available as the July 22 issue of Linn’s was heading to press.

The stamps in the State and County Fairs set evenly balance two key components of the fairs being celebrated. The first two stamps at left show the agricultural and farming aspects of the fair, beginning with two cheerful farmers unloading a large variety of harvested produce. On the second stamp, a young girl sits on a white fence holding a rooster, with a pig standing at her feet and a nearby goat surveying the scene.

The final two stamps capture the social and entertainment elements of the fair. A large Ferris wheel in the background is divided between the second and third stamps. Fairgoers stroll the grounds on the third stamp, enjoying refreshing treats and holding colorful balloons.

The fourth stamp includes images of youngsters at a food booth. A little girl admires a large baked pie, while two other children claim candied apples on a stick from the food vendor.

The designs of these four stamps, however, include other subtle subjects that make this set worthy of a closer look from topical collectors.

The farmers in the first stamp are unloading a large watermelon, but they are surrounded by other harvested fruit and vegetables, including apples, corn, pumpkins and more.

Besides the young girl and her three animals, the second stamp shows part of the Ferris wheel and also part of a carousel. Two of the carousel animals appear to be a horse and a reindeer.

In the sky above the scene on the second stamp are two white birds and a biplane.

The folks in the third scene are nearly all holding something, including ice cream, cotton candy and helium-filled balloons. A man near the lower right corner is holding a dart in his left hand as he attempts to puncture one of the balloons at a fair booth game.

What appears to be a popcorn machine is visible behind the little blond girl on the fourth stamp, and a blue ribbon is part of the scene with the large pie in the display case. White light bulbs spell out “CANDY” on the facade of the overhang above the scene.

County fairs and state fairs share many similar characteristics, including livestock competitions and judging of various agricultural and creative competitions, such as handicrafts and cooking.

Youngsters are able to participate in many competitive categories, vying for prizes or the sale of livestock.

The fairs can include rides, games, food vendors and similar social activities, with musical performances and other entertainment options.

The state of New York claims to have presented the nation’s first state fair Sept. 29-30, 1841, in Syracuse. According to the website of the New York State Fair, “an assembled 10,000-15,000 people heard speeches by notables and viewed animal exhibits, a plowing contest, and samples of manufactured goods for the farm and home.”

County fairs are often held annually during the summer months, and state fairs usually take place in the late summer or early fall.

Two pictorial first-day cancels for the new issue, one in black and the other in color, presumably will be offered on first-day covers for the upcoming issue. Both cancels show modified elements that also appear on the stamps: a pig and a rooster (affixed to a weather vane) on the black postmark, and a mother and child walking with balloons on the color postmark.