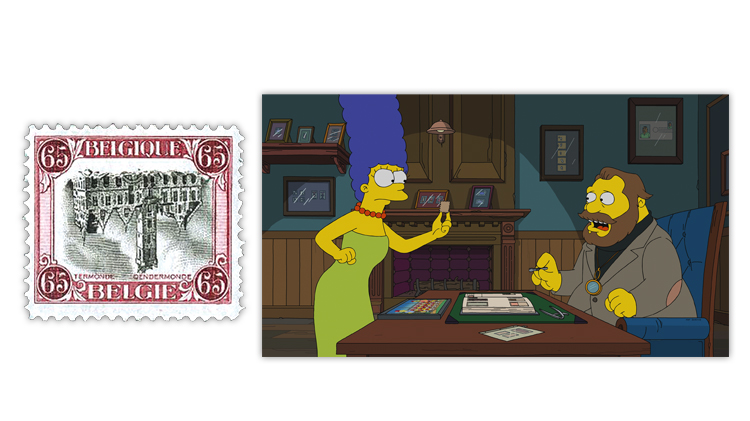 The rare Belgium 1920 65¢ Termonde invert stamp (Scott 139a) and with a scene from the episode of The Simpsons that aired Jan. 3. Television still image courtesy of Twentieth Century Fox Film Corporation.

Philately took center stage in the episode of The Simpsons that aired Jan. 3 (season 32, episode 11). And mentioned in the episode was the rare Belgium 1920 65-centime Termonde invert stamp (Scott 139a) of which 16 exist.

What’s even more interesting to me as a fan of the show is that The Simpsons writer and co-executive producer Ryan Koh took some time to answer Linn’s questions about the series and the episode. His replies are included later in this column.

The longest-running American sitcom, The Simpsons debuted Dec. 17, 1989, and is now broadcast in more than 50 countries around the world. The animated television series focuses on a middle-class family in the fictional city of Springfield.

The Jan. 3 episode titled “The Dad-Feelings Limited” centers around the character Comic Book Guy. His father, revealed to be called “Postage Stamp Fellow” or Mr. Albertson, is voiced by Dan Aykroyd.

The father’s postage stamp obsession is mentioned, along with hobbies of the extended family. One scene shows framed postage stamps lining the wall of the father’s study and an open stamp album on his desk. Zooming in closely in the nearby image from that scene, you can see a fictitious first-day cover for a stamp honoring Drederick Tatum, a former celebrity boxer who resides in Springfield.

But without giving away a big part of the episode, I can say that only one stamp is called out by name: the aforementioned Termonde invert (pronounced Dendermonde in the episode).

Interview with ‘The Simpsons’ writer

Koh, the writer of this episode, provided some insights and answered other stamp questions, in a Q&A conducted via email.

When developing the character of Comic Book Guy’s father, where did the postage stamp angle originate?

We knew Comic Book Guy’s family should be full of collectors, and so we wanted his father to collect the most popular collectible thing. We immediately went to stamps, and we thought it would be fun for him to be wearing a jewelers loupe. We also liked that stamp collectors use tweezers — we thought that would be a good look, too.

The Belgian Dendermonde Invert stamp that was selected for use in the episode has a great story on its own. How was that stamp selected and were others considered? What was the source of stamp collecting information for this episode?

I wish we had a better reason, but we just wanted to use the word “inverted” because that’s the only thing we know that makes a stamp really valuable. We know this mainly from watching Brewster’s Millions where Richard Pryor spends a ton of money on an inverted stamp. And Dendermonde is a fun word to say. It sounds very old timey European.

In previous episodes of The Simpsons, stamp collecting has been discussed. Bart Simpson and Principal Skinner were referenced as stamp collectors. One episode centered around a stamp museum being built in Springfield and the items included seemed very accurate. There is also an episode with Homer at a garage sale, where he finds a block of Inverted Jenny airmail stamps (a notable United States error stamp) and dismisses it because the airplane is upside-down. I assume that all of this is coincidental, but might there be a stamp collector gene somewhere within The Simpsons creative team?

We have a pretty nerdy staff so we like to do deep dives into things we don’t know about. It’s fun to research the world of stamps because the world is so vast. Reading about them allows us to procrastinate from actually writing, so then it ends up in the show.

Do you have any other comments or something our audience of stamp collectors would find interesting? Do you collect stamps yourself?

I had a stamp collection for about 10 minutes when I was young. I bought a bag that was I think 200 assorted stamps from around the world for 5 bucks. I don’t think there was any super-valuable stamp in there, but it’s long been thrown out, so I’ll never know.

Background of the Belgian invert

The city, including the city hall building, was destroyed by the Germans “because city officials refused to pay a fine levied on them.”

The stamp was denominated to meet the express letter service rate and also for the combined registration and postage rate for foreign letters.

Houseman wrote: “The stamp went on sale August 5 as planned. Eight days later, a clerk at the Ghent Central Post Office began breaking up a sheet in the normal manner to sell individual stamps to customers. Nine stamps from this sheet were sold to a hotel bellhop. Several other customers purchased the 65¢ stamps and affixed them to letters.

“Then Hye de Crom purchased one of the Termonde stamps. He noticed something unusual about it. The Town Hall was upside down. The clerk had been selling stamps from a sheet with inverted centers without realizing it.

“Knowing the potential value of these major errors, de Crom returned to the window to buy more stamps from the sheet. He succeeded in purchasing 16 inverts in all — the last three rows of the sheet and a copy from the first row. The other copies of this remarkable error probably were used on mail and later destroyed.

“How did the error occur? Enschede printed the stamp in two stages — first the frame, then the center. On one sheet, the center was printed upside down in relation to the frame.”

The invert has a value of $67,500 in the 2021 Scott Classic Specialized Catalogue of Stamps and Covers, 1840-1940. The value is in italics reflecting the fact that the stamp doesn’t trade frequently.