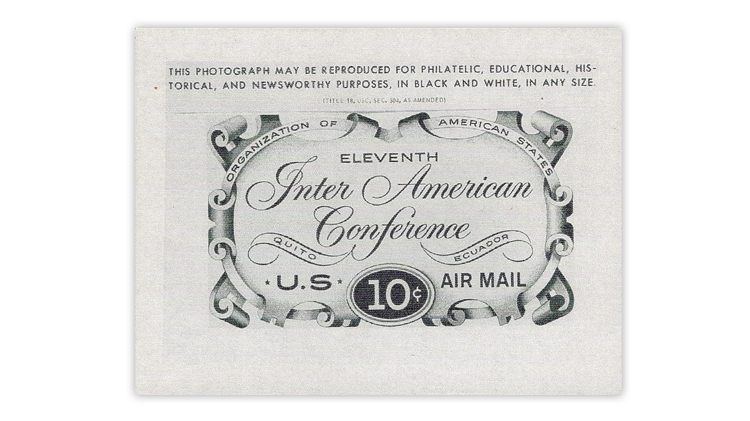 This design was created for a United States airmail stamp to mark a conference originally scheduled to open Feb. 1, 1960, in Quito, Ecuador. The conference was postponed and never held in Quito, so the stamp was shelved.

In the U.S. Stamp Notes column in the Feb. 4, 2019, issue of Linn’s, we looked at the design shown here. It came close to being issued as a United States stamp on Feb. 1, 1960, when the 11th Inter-American Conference originally was scheduled to open in Quito, Ecuador.

The proposed 10¢ airmail stamp had been announced on Oct. 2, 1959. The plates had been made for the stamp, and the presses were ready to roll. But before printing started, the conference was postponed to May 24, 1960. And it was postponed again, eventually announced to be held March 1, 1961.

Meanwhile, the U.S. airmail rate to Latin America was being re-evaluated, ultimately rising to 13¢ on July 1, 1961. So it was decided to scrap the stamp issue. Plates 26564 through 26567 were canceled and destroyed without being put to press.

What I didn’t realize at the time of the Feb. 4, 2019, column was the political maneuvering that was going on behind the scenes and how it would result in two commemorative stamps celebrating Kennedy administration programs in Latin America.