Tip of the week: Bulgaria Knights Templar stamps could be a hit 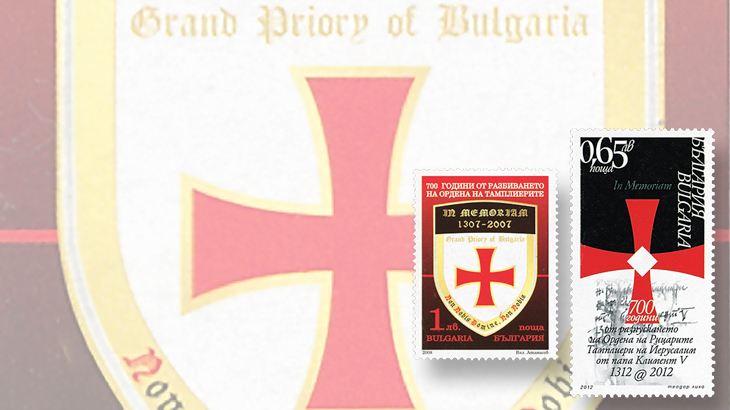 Bulgaria’s 2008 1-lev and 2012 65-stotinki Knights Templar stamps (Scott 4486 and 4589) have the potential to be big hits with casual collectors and the noncollecting public. The 65st stamp was issued in panes of five with a label.

If you have ever spent an idle moment watching the History Channel or similar programming, you are probably aware of the pop cultural fascination with the Knights Templar.

Officially named the Poor Fellow Soldiers of Christ and of the Temple of Solomon, the order was founded in 1119 as part of the Crusades. The order had its headquarters on the Temple Mount in Jerusalem. The monastic order’s first mission was the protection of Christian pilgrims journeying through the Holy Land.

From impoverished beginnings, the order soon became a favorite Christian charity and rose to become the most wealthy and powerful of the Christian military monastic orders. Defeat by the Muslims eventually drove the Crusaders, including the Knights Templar, out of the Holy Land.

Deprived of their founding purpose, the Templars established Templar houses for travelers throughout Europe and became involved in international finance, loaning great sums of money to the crowned heads of Europe and others.

In 1307, Pope Clement V was enduring what some might call the Babylonian captivity of the church, with his papal see in Avignon, France, and was greatly influenced by King Philip IV of France.

Clement felt that the Templars had become too powerful, and Philip, who owed them vast sums of money, decided that it would be better to eliminate them than to repay them. So on Oct. 13, (a Friday) 1307, the grand master of the order was condemned and arrested, as were all members of the order that the authorities could lay their hands on. Most were tortured and burned at the stake, and their assets were confiscated.

The Templars’ origin in Jerusalem, vast wealth, and violent demise have led to all manner of occult associations and conspiracy theories in the popular mind. Today, they are associated with myths of buried treasure, the Ark of the Covenant, the Holy Grail, the Temple treasure, Freemasonry, triskaidekaphobia, and just about every urban legend this side of Big Foot.

We think these two stamps have big potential for growth, particular if some marketing genius stumbles across them and begins hawking them to the general public.