Top 10 recommendations for CSAC, thoughts from a committee veteran 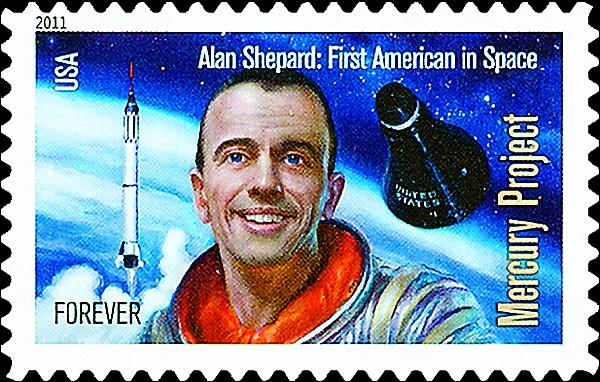 Members of the Citizens’ Stamp Advisory Committee are expected to champion stamps that are contemporary, timely, relevant, interesting and educational. Shown here is the United States Alan B. Shepard Jr. commemorative forever stamp issued May 4, 2011.

Editor’s Note: Linn’s asked recently retired Citizens’ Stamp Advisory Committee member Cary R. Brick to share some thoughts about his 12 years on the committee. This is the second of three articles. The first appeared in the April 14 issue.

One of the advantages of retirement is having the time to kick back, contemplate the present, dream of the future and, of course, reflect upon the past with 20/20 hindsight.

Having been term-limited into retirement from the United States Postal Service’s Citizens’ Stamp Advisory Committee, I have had plenty of time to reflect.

Working with USPS professionals dedicated to overseeing the most imaginative stamp program in the world was a rewarding opportunity. I always found the staff, starting at the top with Postmaster General Patrick Donahoe, to be committed to presenting a program as spectacular as the fabric of America itself.

I hope future members will appreciate their CSAC membership as much as I did during my years. I have a few suggestions for them, and for my former colleagues who continue to serve.

Here are my top 10 observations and recommendations

1. Recognize that your membership carries responsibilities, the primary of which is attendance.

Attendance is always an issue. Expecting you to show up to participate in four meetings a year is not unreasonable. You are accomplished in your careers; you sit on boards and committees as part of your day jobs.

This honor is just as important. Don’t skip meetings, as some have done, because they are inconvenient. The meeting dates are established a year in advance; you have plenty of time to make plans. You owe the Postal Service no less.

Don’t arrive halfway through the meetings, as some have done, and don’t leave early with the excuse that “I have a flight to catch.”

2. Take seriously the stamp subject requests from the public. They are, after all, postal consumers who have a demonstrated interest in the program.

Too often those requests are dismissed as trivial and given secondary exposure on the agenda. Too often their presentation for discussion is rushed with little or no opportunity for serious discussion because of manufactured time constraints.

3. Ask for a list of those subjects not presented for formal review because they failed to meet criteria.Those subjects are important because they represent a snapshot of what those same consumers and stamp enthusiasts are thinking.

4. Never lose sight of the fact that the U.S. Postal Service says it is your responsibility to champion stamps that are contemporary, timely, relevant, interesting and educational.

5. Members are advised in orientation briefings that personal agendas are not acceptable in the process. Far too often, members expend their energies only for subjects of personal interest.

Such an approach is a disservice to the program. There is a difference between personal connection and personal expertise. The former should be rejected, the latter solicited.

6. My CSAC orientation briefing was confusing at best, a loss of 20 minutes from my life never to be retrieved.

It took a year for me to figure out which end was up. Other members told me they experienced the same thing.

Thankfully, a few veterans took me aside to give me an introduction that I considered CSAC 101.

My advice is to reform the briefing process.

7. Traditionally, voting on stamp subject selections and design reviews has been by a show of hands. While providing for a rapid meeting pace, it has its disadvantages.

For example, no one wants to vote against a proposal put forth by a colleague or friend sitting nearby or across the table. That’s human nature.

The show-of-hands procedure has led to to many seemingly unanimous decisions when, in fact, one or more members have feelings to the contrary.

I witnessed many occasions where members sat on their hands, staring downward, letting a questionable subject or design move forward.

Because individual votes are not recorded, any dissension is lost forever.

How about using paper ballots? That method was tried once during my 12 years on the committee — finally, during my final meeting, and at my suggestion — and it worked.

Ask that the practice be continued.

8. Members with design and artistic expertise are quite appropriately assigned to the CSAC design subcommittee. By the time their work on prospective stamp art (which has been tweaked and retweaked) is shown to the full committee for review, it is almost too late for any meaningful input from the nondesigners.

So, instead of constructive criticism being welcomed, it is too often pooh-poohed and voted upon (again, by a show of hands) when, in fact, some members might not share in the oohs and aahs that fill the room when designs are shown on the big screen.

Suggestions and questions posed by those not serving on the design subcommittee are too often summarily rejected. Find a way to fix the process.

9. In 2002, I asked stamp management to forward to me any mail specifically addressed to me. Never did I receive a single piece.

Surely one or more of the 40,000 to 50,000 stamp proposals received annually must have had my name on the envelope.

To those collectors who wrote to me at the CSAC address and did not receive a personal reply, I apologize.

Those who wrote to me at my home address got a polite and simple “thank you.” If that was a violation of policy, so be it. Change the policy.

10. Engage in a spirit of comity and peace. Last September’s unfortunate flare-up between CSAC members and stamp management personnel resulting in a walkout was not the committee’s happiest moment, of course, but hopefully it resulted in a new era of cordiality.

The angst that led to the walkout could have been prevented with better communications from the Stamp Services management team. My observation is that they are now reaching out to CSAC members with a new level of communication.

My hope is for continued open communications.