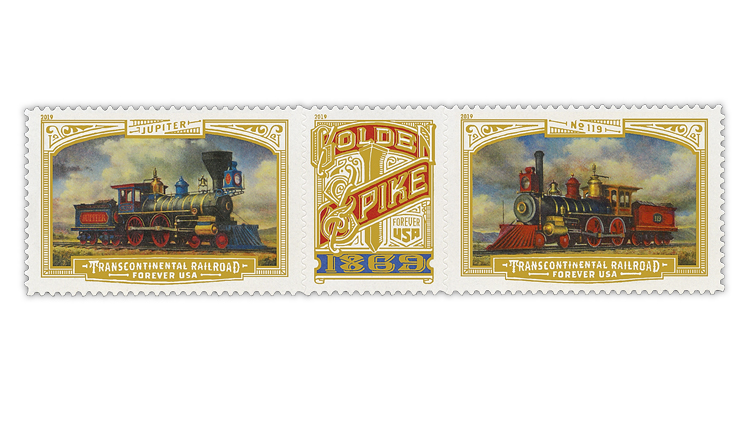 The readers of Linn’s Stamp News let their affinity for issues celebrating historic events show through in their selection of the three stamps commemorating the 150th anniversary of the 1869 completion of the Transcontinental Railroad as their overall favorite among United States stamps issued during 2019.

The 2019 Linn’s U.S. Stamp Popularity Poll was introduced in the Dec. 16, 2019, issue. A two-page magazine spread illustrated all of the stamps issued during the calendar year.

Readers voted online and by postal mail, with ballots published each week in Linn’s through the Feb. 24 issue.

Hundreds of online voters also participated via Linns.com, bringing the total of mail-in and online votes to 1,407. The votes from online and mail-in ballots were combined to calculate this year’s winners.

On May 10, 1869, the Union Pacific and Central Pacific railroads met at Promontory Summit, Utah, where a ceremonial golden spike was driven to mark the completion of the first railroad to connect the nation’s East and West coasts.

The first-day ceremony for the three-stamp set was held May 10, 2019, 150 years to the day after the Central Pacific locomotive Jupiter and the Union Pacific’s No. 119 met at Promontory Summit.

To read the rest of this article and review the tables detailing how readers voted in the various categories, subscribe to Linn’s Stamp News.