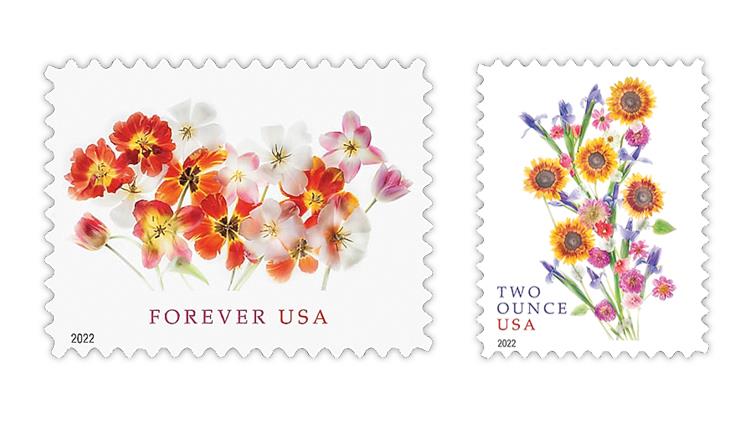 Colorful arrangements of tulips and sunflowers take center stage on two United States stamps to be issued March 24 in two different cities without an official first-day ceremony. Mount Vernon, Wash., is the first-day city for the nondenominated (58¢) Tulips stamp. The nondenominated (78¢) 2-ounce rate Sunflower Bouquet stamp will be issued in Lawrence, Kan. 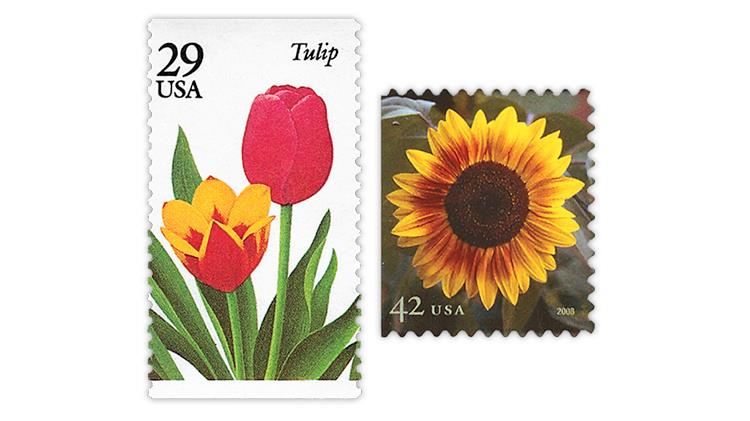 Tulips and sunflowers have appeared on a number of U.S. stamps over the years. One of the five 1993 29¢ Garden Flowers booklet stamps pictures a pair of tulips. A vibrant sunflower in full bloom dominates the design of a 42¢ booklet stamp issued in 2008. 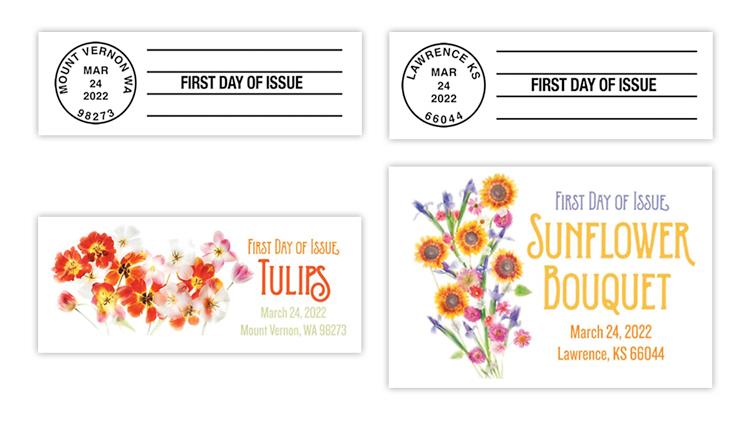 Black and digital color postmarks are available for the new Tulips and Sunflower Bouquet stamps being issued March 24.
Previous
Next

Both stamps will be issued without an official first-day ceremony, the Postal Service said.

The stamps are intended primarily as wedding invitation postage but are valid for any postal use.

Veteran U.S. stamp designer Ethel Kessler based her designs of both stamps on existing digital photographs by Harold Davis of Berkeley, Calif.

The Tulips stamp is inscribed “FOREVER” at the bottom to indicate that it will always be good for domestic first-class letters weighing 1 ounce or less.

“TWO OUNCE” is lettered in two lines in the bottom left corner of the Sunflower Bouquet stamp. This inscription means the stamp will satisfy the 2-ounce letter rate (currently 78¢) regardless of future rate increases.

The Tulips stamp “features a luminous, almost ethereal assortment of overlapping tulips in red, orange, yellow, purple, and white against a bright white background,” according to the Postal Service.

“Similar in design to the 2-ounce Sunflower Bouquet stamp, also issued in 2022, this Forever stamp can be used on RSVP envelopes often enclosed with wedding invitations.”

The Sunflower Bouquet 2-ounce rate stamp shows “a still life image of several orange-and-yellow sunflowers intermingled with irises, dahlias, echinacea (coneflowers), and other small red, purple, white, and pink flowers against a white background,” according to the Postal Service.

Mailings that require extra postage — such as small gifts, oversized greeting cards and invitations to birthdays, weddings, anniversaries and other notable celebrations — are ideal for the Sunflower Bouquet stamp.

When seen together, the two stamps “form a natural pair,” the USPS said.

Tulips and sunflowers are no strangers to U.S. stamps. Both have appeared on different issues over the years.

The Postal Service has published designs for four pictorial first-day cancels for the two new stamps, one in black and one in color for each stamp.

Full color pictorial first-day cancels found on covers marketed by the Postal Service and others prepared by some cachetmakers will feature the same arrangements of flowers as seen on the stamps.

Up to 50 black postmarks can be requested on collector-supplied envelopes at no cost. Digital color postmark requests require a fee of 50¢ per postmark with a minimum order of 10. Two test envelopes must be included as well.