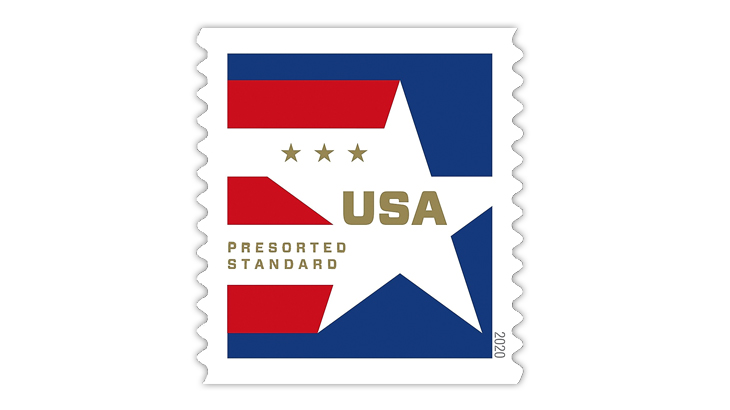 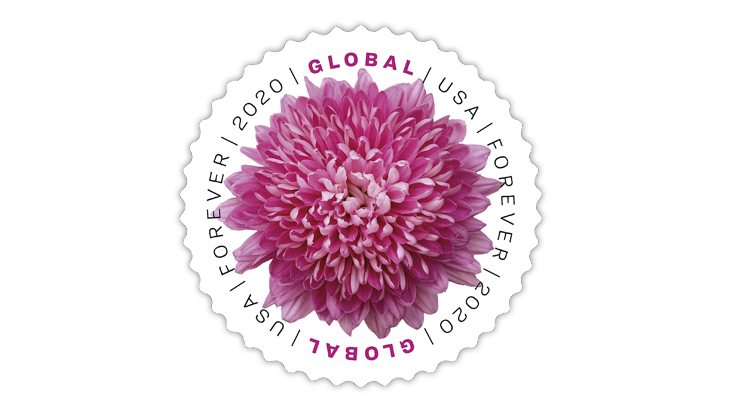 A pink chrysanthemum is featured on a round stamp that will be issued April 24. The nondenominated global forever stamp will fulfill the rate for international letter mail.
Previous
Next

The United States Postal Service will issue a new stamp for presorted standard mail on Feb. 3, and a new round global forever stamp for international letter mail on April 24.

News of the forthcoming stamps was revealed by the Postal Service on Dec. 30, 2019.

The nondenominated (10¢) Presorted Star coil stamp, with a design in red, white, blue and gold, will be issued in self-adhesive rolls of 3,000 and 10,000. The stamp will be used on large quantities of business mail (often advertising mail) that is prepared for mailing, with a permit, at a reduced postage rate.

The stamp was designed by Matthew Pamer. The USPS art director for this stamp was Greg Breeding.

“This new stamp celebrates the beloved American Stars and Stripes by focusing on its vital components,” according to the Postal Service. “The asymmetrical design includes one large white star, two white and three red stripes, and a brilliant blue background, as well as lettering and three small stars in gold.”

No official first-day ceremony is planned for the Presorted Star coil stamp.

The new global forever stamp for international letter mail is also nondenominated. It is always valid to fulfill the current international 1-ounce letter rate, which will increase from $1.15 to $1.20 on Jan. 26.

The new stamp features an overhead photograph by Hong Vo of a pink chrysanthemum against a white background. Breeding also designed this stamp. The USPS art director for the stamp is William J. Gicker.

The stamp will be issued with a first-day ceremony in Burlingame, Calif. Details about the event will be announced at a later date, according to the Postal Service.

The new stamps have been added to Linn’s U.S. Stamp Program for 2020.