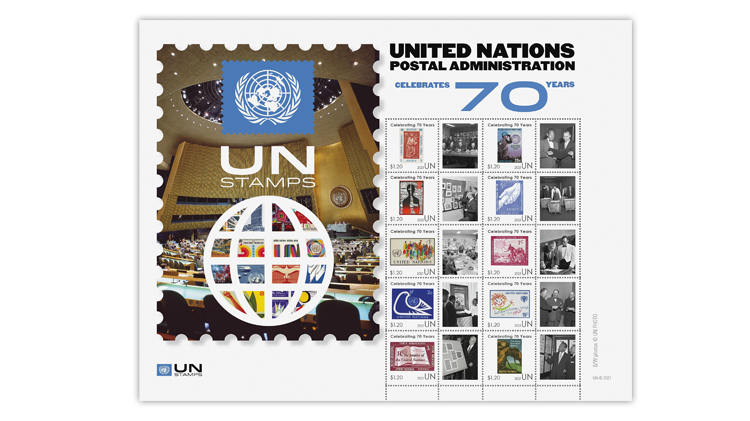 Stamp-on-stamp designs are featured on new stamps commemorating the 70th anniversary of the United Nations Postal Administration’s office in New York City. The UNPA will issue this pane of 10 stamps and se-tenant labels April 30.

The United Nations Postal Administration will celebrate the 70th anniversary of its New York City office on a pane of 10 $1.20 stamps and se-tenant labels to be issued April 30.

The pane combines stamp-on-stamp designs with black-and-white photographs on the labels. The photos show activities at the UNPA’s New York office, including the signing of a postal agreement with the United States on March 28, 1951; design committee meetings; and a philatelic exhibit.

The UNPA issued its first stamps on United Nations Day, Oct. 24, 1951 (Scott 1-11), and two stamps released on that day are featured on the pane.

The column on the left begins with a stamp-on-stamp design of a 5¢ stamp showing a bronze image of Justice (Scott 171). This stamp is denominated in Canadian currency, however, not U.S. currency. It was part of a set of five issued April 28, 1967, valid for use at the U.N. pavilion at Expo 67 in Montreal, Quebec, Canada (170-174).

The final stamp-on-stamp design on the left pictures the 1955 4¢ commemorative for the 10th anniversary of the United Nations (Scott 36).

In addition to the stamp-on-stamp design, each of the new $1.20 stamps includes the text “Celebrating 70 Years” at the top, the denomination at bottom left and “2021” and “UN” at bottom right.

The UNPA calls this pane of 10 stamps and labels a “special event sheet.” Shown on the left side is a photograph of the U.N. General Assembly Hall with the U.N. logo and a symbolic globe with a montage of images from U.N. stamps superimposed on it.

Sergio Baradat of the United States designed the stamp pane.