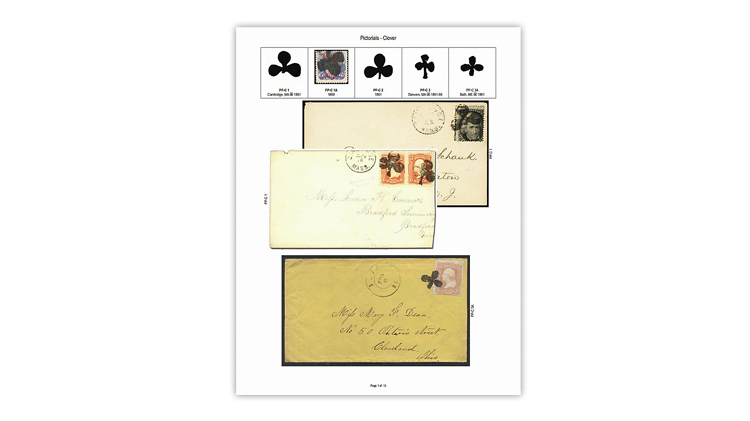 Three updated and revised sections of United States Cancellations 1845-1869 are available on the United States Philatelic Classics Society’s website. One section is dedicated to pictorial designs that feature plants; a page from that section featuring clo

The society said, “This update to the original 1980 publication is a living digital document that will be regularly updated to include new information and discoveries.”

The original work, compiled by Hubert Skinner and Amos Eno and published by the American Philatelic Society in 1980, was the culmination of a combined 65 years of research of the “many striking, ingenious and unusual cancellations devised by nineteenth century postmasters to ‘kill’ or ‘cancel’ the early adhesive stamps.”

The classification system devised by the two editors was influential, and Skinner-Eno numbers are still referenced by collectors, dealers and auction houses.

However, in the almost 40 years since the handbook was published, there have been numerous discoveries in the field of fancy cancellations.

The virtual handbook project was spearheaded by Charles Souder and Ed Jatho (1948-2018), who added and revised hundreds of new cancellations. Souder is continuing the project and managing the webpage.

In addition to new tracings (vastly improving upon those in the original book), there are also illustrations of stamps and covers with the various markings, making identification easier.

Additional chapters will be added over time, the society reported.

Because this is an ongoing project, collectors are encouraged to submit cancellations on stamps and covers from their collections for possible use in future revisions.

Visit the United States Philatelic Classics Society’s website to view the original edition of Skinner and Eno’s United States Cancellations 1845-1869, as well as the revised sections that have been completed.

These resources are available to both members and nonmembers.