U.S. Happy Birthday stamp will be the first at new rate 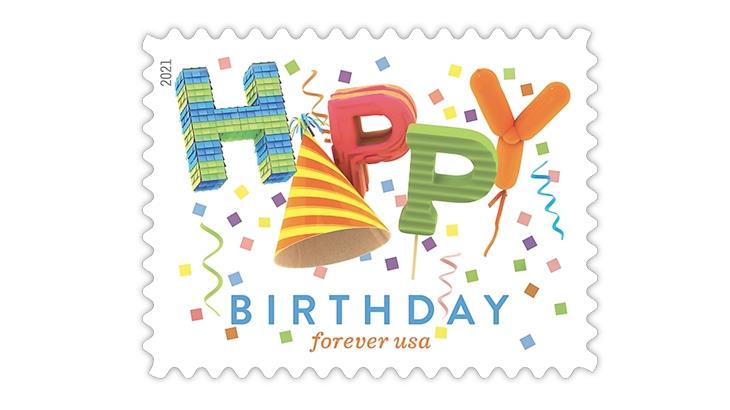 A new United States Happy Birthday forever stamp will debut Sept. 9, less than two weeks after the price of the forever stamp increases to 58¢. The festive stamp illustration was created by Rodolfo Castro of Catalone Design. 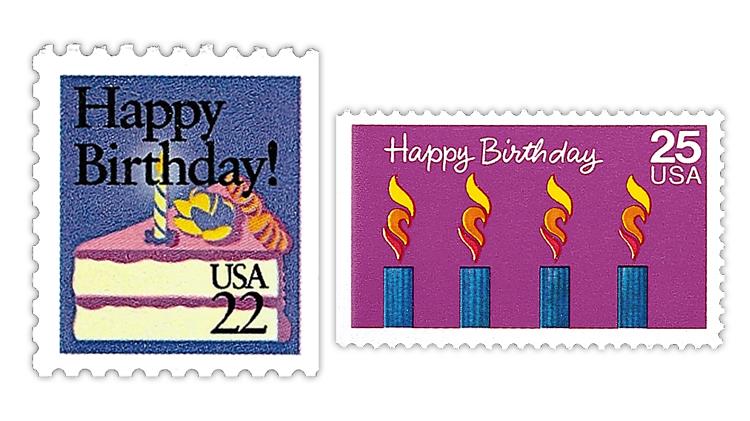 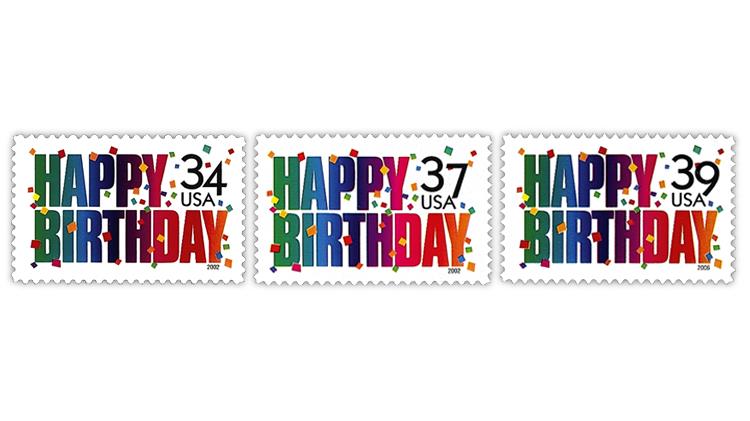 Three Happy Birthday stamps sharing the same design but with different denominations were issued over the course of four years, from 2002 to 2006. 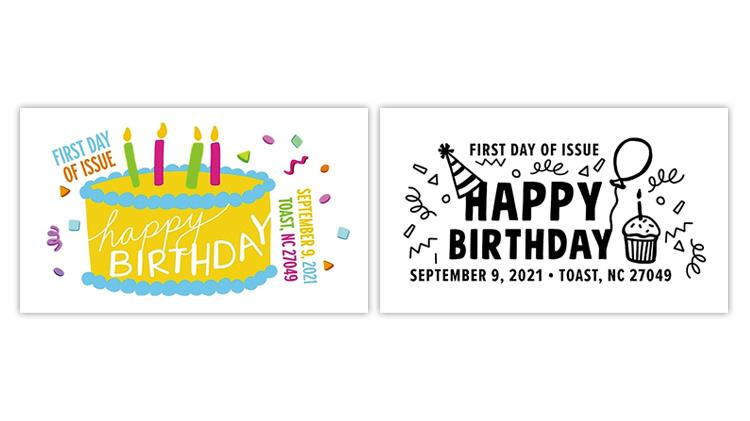 The Happy Birthday theme of the new stamp extends to the two pictorial postmarks created by the Postal Service fo use on first-day covers.
Previous
Next

A new United States forever stamp with a happy birthday theme will be issued Sept. 9 in panes of 20.

The designated first-day city is Toast, N.C., a small town just west of Mount Airy and near the state’s shared border with Virginia. No first-day ceremony is planned for the new stamp.

It will be the first forever stamp to debut at the new domestic first-class letter mail rate of 58¢, which goes into effect Aug. 29.

On that date, all forever stamps presently available from the U.S. Postal Service will increase in price by 3¢ from the previous 55¢ rate.

The new stamp is the sixth U.S. issue to specifically carry the happy birthday message. The confetti-strewn design by Lisa Catalone Castro and Rodolfo Castro of Catalone Design Co. “conveys exuberant greetings by calling to mind the childhood excitement of a birthday party,” according to the Postal Service. “Each of the five letters in the word ‘HAPPY’ is inspired by a different party decoration in the midst of a flurry of multicolored ribbons and confetti.”

The letters represent a red and green pinata (H), an orange and yellow striped birthday hat (A), a red piece of frosted cake (P), a green birthday candle (P) and an orange balloon sculpture (Y). “BIRTHDAY” is printed in smaller simple letters below.

The Catalone design group previously worked with Kessler to create designs for the four 2001 Love stamps that use handwritten love letters by John and Abigail Adams as a backdrop to a single rose (Scott 3496-3499), and the four 44¢ Supreme Court Justices stamps issued in a pane of four in 2009 (4422).

“The celebration of birthdays in the United States has its origins in a wide array of cultural traditions,” according to the Postal Service. “Some ancient civilizations observed the birthdays of prominent figures or celebrated rites of passage, and well-wishes and gifts have long been associated with bringing about good fortune.”

Beth Herman, writing for Farmer’s Almanac, said, “In the annals of birthday history, the Germans are credited with initiating the acknowledgment of a child’s birthday, called kinderfeste — meaning children and festival or party.”

The U.S. Postal Service’s history of Happy Birthday stamps began in 1987 when it issued a booklet of eight different 22¢ stamps. The stamps in this Special Occasions booklet conveyed messages including “Best wishes!,” “Thank you!,” “Get well!” and so on, each with an appropriate illustration.

The Happy Birthday stamp in this set shows a slice of birthday cake with one lit candle (Scott 2272).

The booklet contained a single pane of 10 stamps, with the “Congratulations!” and “Happy Birthday!” stamps printed twice on the pane.

A booklet of 12 25¢ Special Occasions stamps was issued in 1988. Among the four designs was a Happy Birthday stamp that simply shows four identical lit blue candles with spiraling yellow and orange flames (Scott 2395).

It wasn’t until 2002 that a new Happy Birthday stamp appeared. With rainbow color lettering and a sprinkle of confetti, the design by Harry Zelenko was bold and festive.

The formula must have worked for the Postal Service, because after the next rate change on Jan. 8, 2006, the same design was used once more for a 39¢ stamp that was issued June 23 (Scott 4079).

That was the final reuse of Zelenko’s design, and the last U.S. Happy Birthday stamp to appear until this new issue 15 years later.

In the meantime, however, the Postal Service has issued six different stamps with a more generic celebrate theme, including the nondenominated Let’s Celebrate forever stamp issued Feb. 14, 2020 (Scott 5434).

The black postmark surrounds the HAPPY BIRTHDAY text with confetti and streamers, a party hat, a balloon and a cupcake with one lit candle.

The color postmark also shows confetti, along with a cake decorated with the phrase “Happy Birthday” and topped with four lit candles.